Horsezz > Horse Breeds > Haflinger Horse Facts That Will Surprise You

Haflinger Horse Facts That Will Surprise You

The Haflinger is a horse breed that is loved for its gorgeous look and friendly temperament. The best description of this horse is little but mighty. We compiled a list of fascinating facts about this equine. Let’s get the hang of such a horse breed.

What Is a Haflinger Horse?

This horse breed originated from Austria and Italy. It was developed in the 19th century. The main purpose of breeding was to create a hardy equine to withstand mountainous terrains. In later years, after the wars, the Haflinger Horse was crossbred with other horses to save the breed. According to the World Haflinger Breeding, the first international organization was established in Tyrol in 1976. Currently, the horse’s conformation has changed since various bloodlines were infused.

Haflinger horses are small and sturdy equines that are used in a range of activities. You may face the breed in different horse disciplines to be ridden under the saddle. These include dressage, vaulting, endurance riding, and therapeutic riding. Besides, the Haflinger breed is used as a draft horse, for harness working, pulling, and farming. 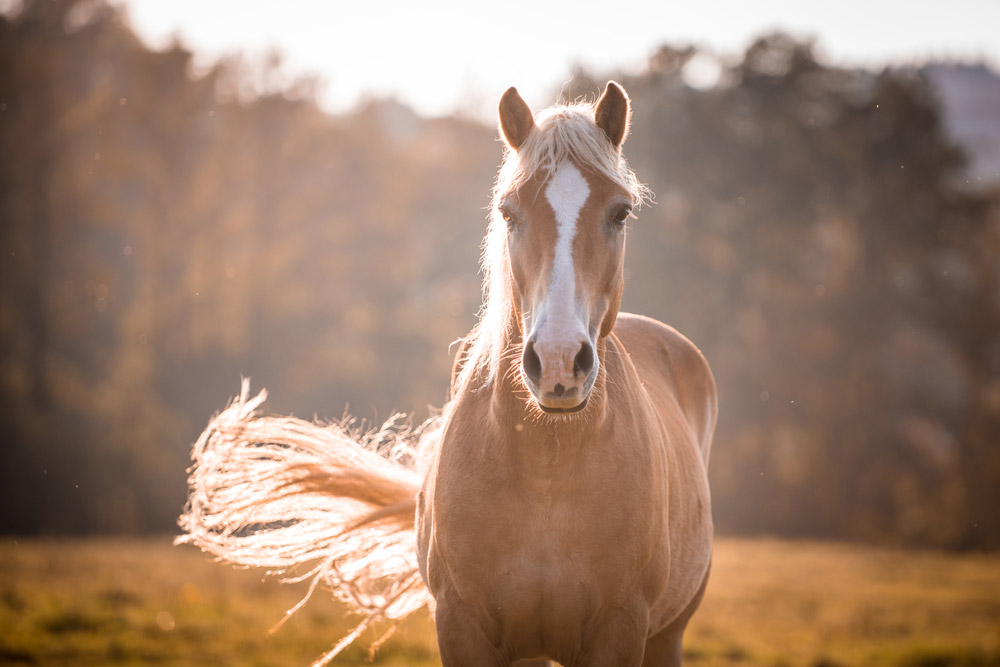 The Haflinger has a gentle and friendly temperament. They are considered excellent companions for farmers and children. Therapeutic riding sessions involve Haflinger horses as they get on with people well.

The Haflinger horses are laid-back equines that are family-friendly. They are calm enough to work with beginner riders and kids. These features are beneficial for riders who want to improve their confidence. The horse is willing to please its horseman so you can have fun together.

Another perk is that the breed is highly versatile. You can flawlessly use the Haflinger horse in a wide range of equestrian disciplines. Moreover, it will definitely stand you in good stead as a working horse. They have compact bodies but Haflinger horses are hardy to withstand heavy workloads. 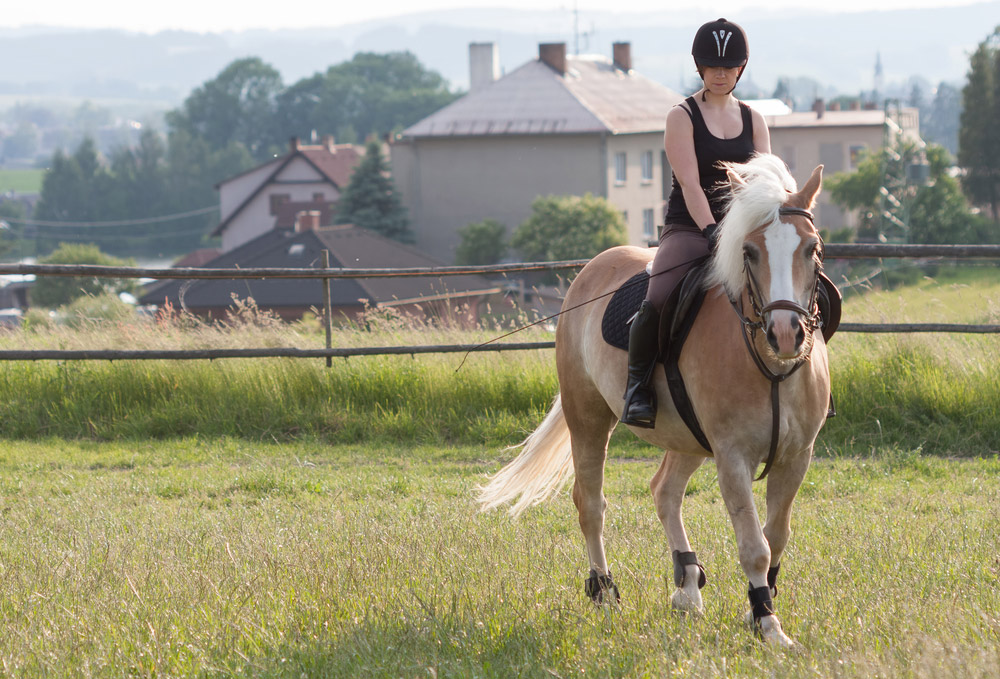 10 Haflinger Horse Facts You Should Know

The Haflinger has the bloodline of the Arabian Horse. It’s believed the first Haflinger was the result of crossbreeding between the Arabian and a pony with Austria and Italy origin. You may notice some Haflinger horses have a distinguishing Arabian head shape.

The progenitor of the Haflinger breed was a sire named 249 Folie. It was born in 1874. All the representatives of the breed can trace the pedigree back to Folie. There are seven stallion lines through which you can track the lineage:

As we already mentioned, Haflinger horses are outgoing equines. They are great for keeping them at the farm. Such horses are willing to please and entertain. They will be a superb companion for little kids too. Consider a Haflinger horse for a beginner rider. The breed can be suitable for a wide array of riding disciplines. 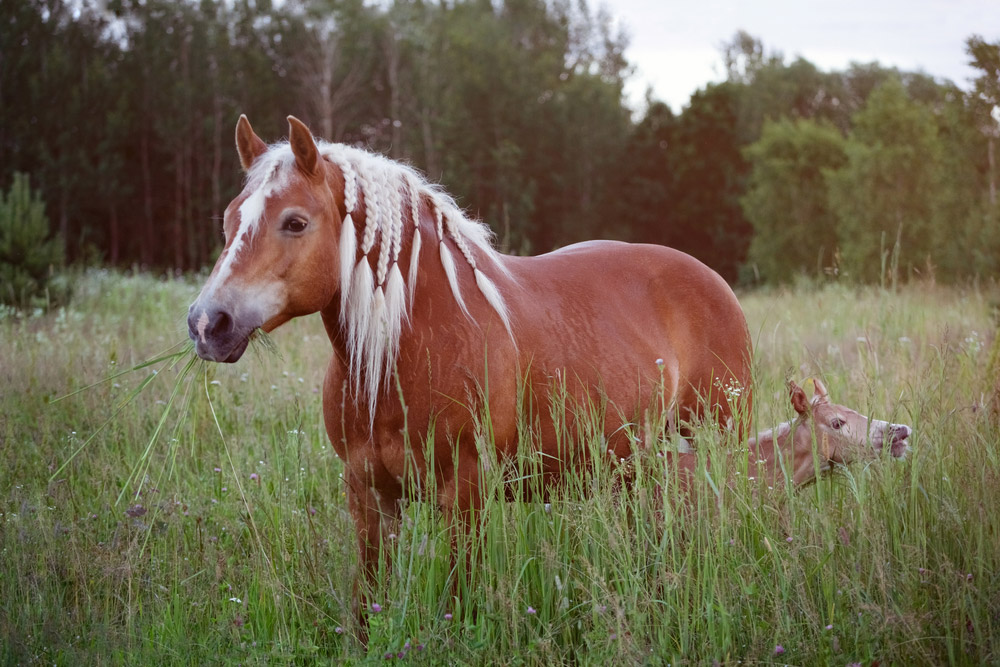 The Haflinger horse is not a fussy eater. Thus, the horse care routine is easy and delightful. The breed can live on limited pasture, grain, and hay supply. For Haflinger horses that work hard, it’s better to provide a diet with low-starch and low-sugar feed. Make sure you provide enough water to avoid dehydration.

Mind that Haflinger horses come in a chestnut color only. However, you may expect different shades of the color. These include light gold and pale chestnut. For instance, dark liver chestnut is called chocolate color. The breed usually has a golden chestnut coat and cream or white mane and tail. There are also white markings on the equine’s head and lower legs (white socks).

The Haflinger breed has a compact body. Some people tend to think it’s a pony breed. It makes sense as pony ancestors are recorded in the pedigree. But the truth is the Haflinger is a horse breed.

The average height of the Haflinger horse is 13.2 to 15 hands. Most equines that are lower than 14.2 hands are referred to as ponies. But there are several exceptions and the Haflinger is considered a horse. Besides, the breed is more horse-like according to its behavior and temperament. The animals with a steady nature are willing to work and train. 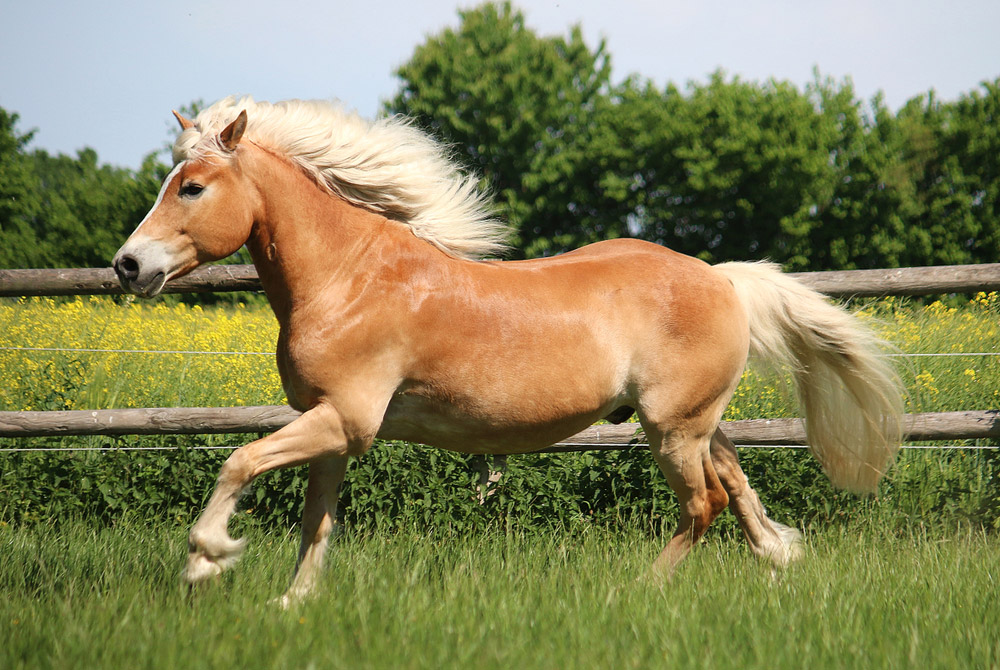 The breed stands out with its compact and elegant body. The average weight is between 800 and 1,300 pounds. The head is lean and expressive. The eyes are large and the neck is well-formed. The horse has pronounced withers, sloping shoulders with a deep chest. The croup is well-divided and the limbs are defined. The knees are flat and broad. The back is muscular and medium-long.

The Haflinger horse features ground-covering and rhythmic gaits. The walk is energetic and at the same time relaxed. The trot and canter are athletic and well-balanced. They tend to be energetic and elastic. The canter sticks out with its distinguishing knee action. It has a clear motion forward and upward.

Haflinger horses have long life spans. The average life expectancy is 25 to 30 years, which is impressive. Moreover, mares are able to produce foals in their twenties with no issues. And go on living into their thirties.

The Haflinger is an affordable horse breed. You can buy a Haflinger horse for $5,000 to $10,000. The price range depends on an array of factors. These are age, gender, health condition, and more. 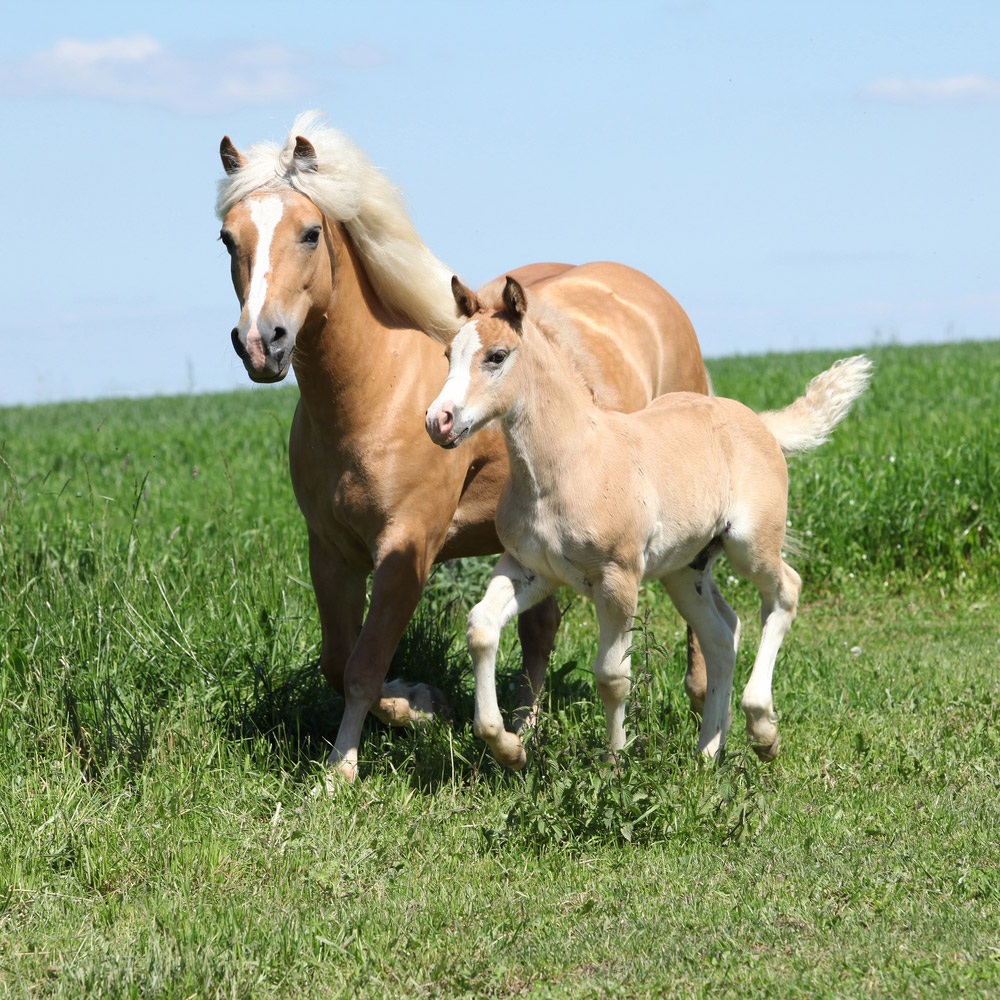 The Haflinger Horse as the Best Companion

The Haflinger is an excellent choice for beginner riders. They are extremely friendly and communicative. The animals are easy to train as they are willing to work. That’s a great option for kids too. Lots of Haflinger horses are used in hippotherapy to help people overcome their physical and mental issues.

Haflinger horses are famous for their elegant look. They have compact bodies but the breed is hardy. You can use the horse for farming as well as partaking in equestrian sports. The horse care is a pleasure as they require little feed.

David Garcia is a vivid writer and a big fan of equestrian sports. He founded Horsezz – the blog where David shares his knowledge and experience about horses, tack, equestrian riding equipment, taking care of horses, and other useful guidelines.
PrevPreviousHow to Measure Saddle Size: Comprehensive Guide
NextAppaloosa Horse Temperament and CharacteristicsNext