The Andalusian or the Pure Spanish Horse (Pura Raza Española) is a relatively old breed. The equines were used as cavalry horses and ranch horses.

The breed is loved for its graceful and luxurious look. It’s an athletic breed that is commonly used in a range of equestrian sports. Jumping, pleasure riding, trail riding is also suitable for the equine. Here’s a breed profile with interesting Andalusian Horse facts to get this breed better.

The Andalusian derived from the Iberian Peninsula in Spain. The equine has bloodlines from the Spanish horse and the North African Barb horse. The animal is believed to be the first combination of European heavy horse and Oriental light horse.

The purebred Spanish horse has been known since the 15th century. The Andalusian horse breed has been recorded as a war horse. It was a noble equine that kings used to ride under the saddle.

The 19th century was marked by the breed’s population decline. Due to the wars, crossbreeding, and diseases, Andalusian horses reduced in numbers. The tendency took place until the 1960s as the breed was not allowed to be exported. Since then, things went better. Andalusians have spread all over the world and in the early 21st century, the horse population reached 185,000 registered equines.

The Andalusian horse came from Spanish Iberian horses. Its name derives from the place of origin – the Andalusia Province in Spain.

Since the 20th century, the breeding of draft horses has been at the top of the agenda. Different breeds like Thoroughbreds and Arabians were crossbred with Andalusian horses. 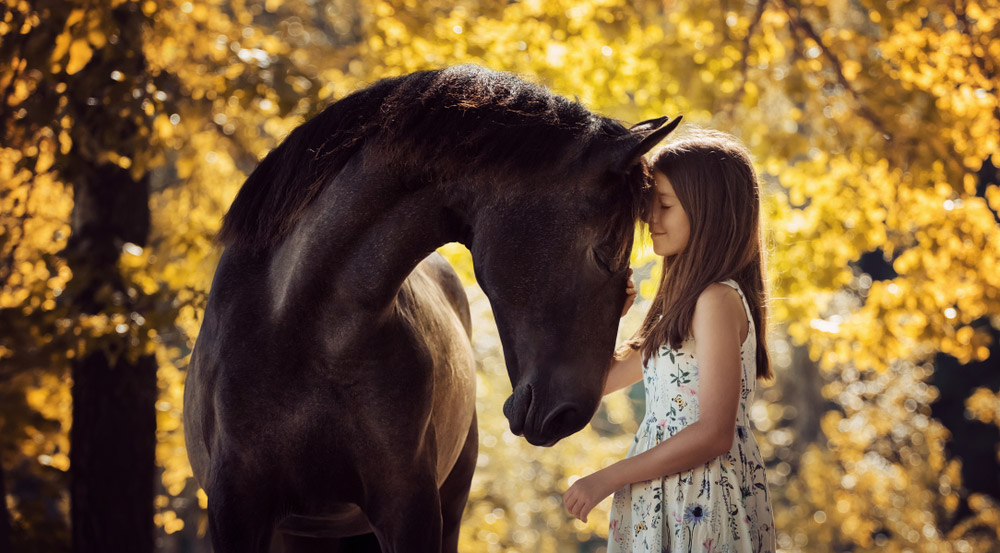 The Andalusian Horse is extremely intelligent and docile. In fact, the equines are sensitive and outgoing. That’s an excellent companion for beginner and pro riders.

Horse owners state the Andalusian Horse is willing to learn, which is a plus. Such horses have a bold spirit. That’s why they have performed as bullfighting horses. Such horses can be used in equestrian competitions flawlessly. The equines are great race horses and dressage horses.

Andalusian horses are calm and versatile. They are highly responsive and cooperative. Andalusians are great learners. Horse experts enjoy working with the Andalusian horse breed. They can easily adapt to new situations and changes.

However, some horse owners don’t recommend the Andalusian Horse as the very first horse. Due to their courage and agility, the breed is quite energetic. It’s better to deal with the equine having already obtained some experience.

Andalusians have an elegant and athletic build. The head is of medium length, the profile is straight. The neck is long and wide. The withers are well-defined and the chest is broad. The back is short but wide. The hindquarters are massive and the croup is well-rounded. Andalusian horses have a thick mane and tail like Friesian horses. But unlike Friesians, the feathering of Andalusians is not so excessive.

The horse’s gait is energetic. The move is harmonious and elevated. It’s well-balanced with forward movements. The registry standards don’t allow excessive wobbling and irregular tempo in the horse breed.

As for common health issues, Andalusian horses prone to reduced blood circulation. This is related to small intestinal problems. The disorder could lead to laminitis that affects the horse’s hooves. Some equines also experience issues with their metabolic system. The disease may appear as the horse grows up. A professional vet’s help is needed to plan the proper diet and nutrition. 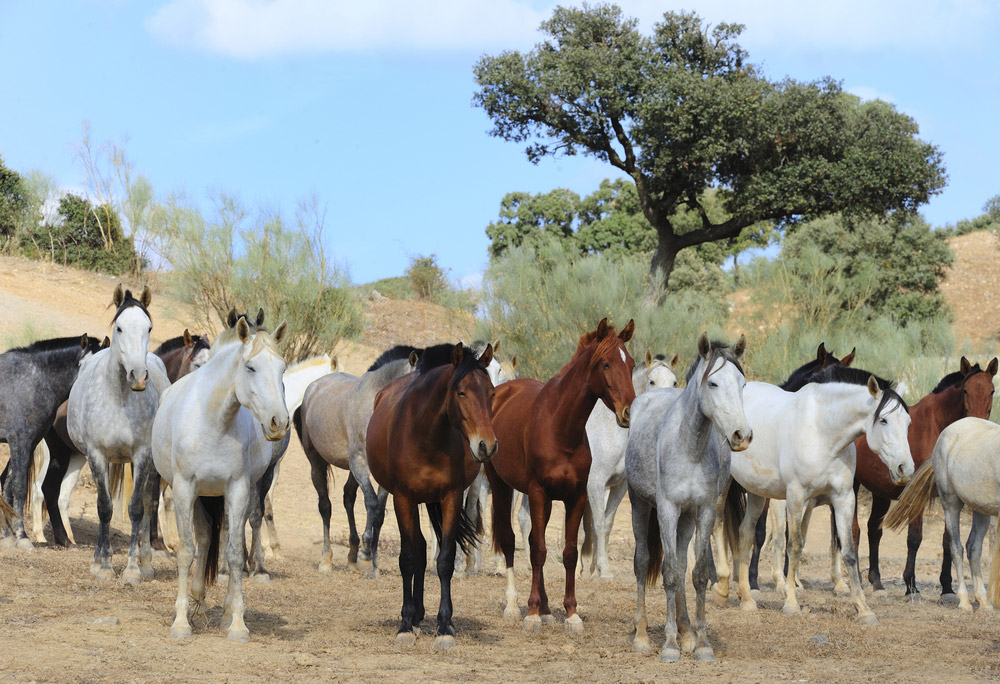 Andalusian Horse Colors You Can Face

Modern Andalusian horses usually come in bay and grey colors. However, history has recorded Andalusians of other colors as well. They include black, palomino, chestnut, and dun. Such colors as pearl, cremello, and buckskin are pretty rare for Andalusians. Such colors are acceptable to be registered.

In the past, some equines with spotted patterns were also recorded. Some Andalusian horses had white markings on the head and body. There were superstitions regarding the hair whorls in horses. Depending on their place on the horse, it was believed to bring good or bad luck. The whorl near the dock was a sign of good luck. While the white marking on the cheek or shoulders was a sign of bad luck.

The use of the Andalusian Horse breed has been changed throughout centuries. Some equines regularly partook in racing. Especially in the 17th century. In the 18th century, the Spanish military used the breed as war horses.

The Andalusians are one of the most famous sporty horse breeds. It has been used for both driving and riding. These Spanish animals are popular in dressage. The Andalusian horse is also known for its aggressive temperament. That’s why the breed was used as a bullfighting horse. 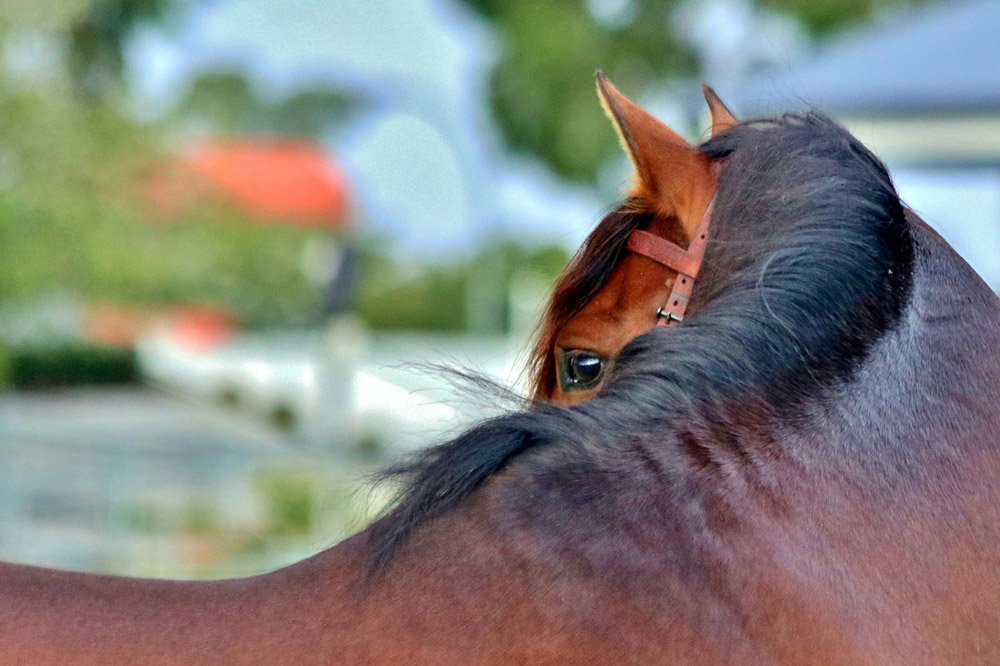 Andalusians are an athletic breed developed in Spain. The animals are quite versatile in use. The breed is willing to work so you can use the horse in a range of horse shows. The Andalusian Horse usually comes in grey and bay colors. They are loved for their sporty body and luxurious mane and tail.

The equine has been crossbred with an array of horses like the American Quarter Horse and Arabian Horse. The Andalusian became the foundation of some North and South American horse breeds.

The Andalusian has a satisfying temperament that fits most of the riders. The equine is agile and brave. They are easy keepers which means the animals require little forage and water supply.

David Garcia is a vivid writer and a big fan of equestrian sports. He founded Horsezz – the blog where David shares his knowledge and experience about horses, tack, equestrian riding equipment, taking care of horses, and other useful guidelines.
PrevPreviousFriesian Horse Temperament and Characteristics
NextArabian Horse Characteristics and TemperamentNext