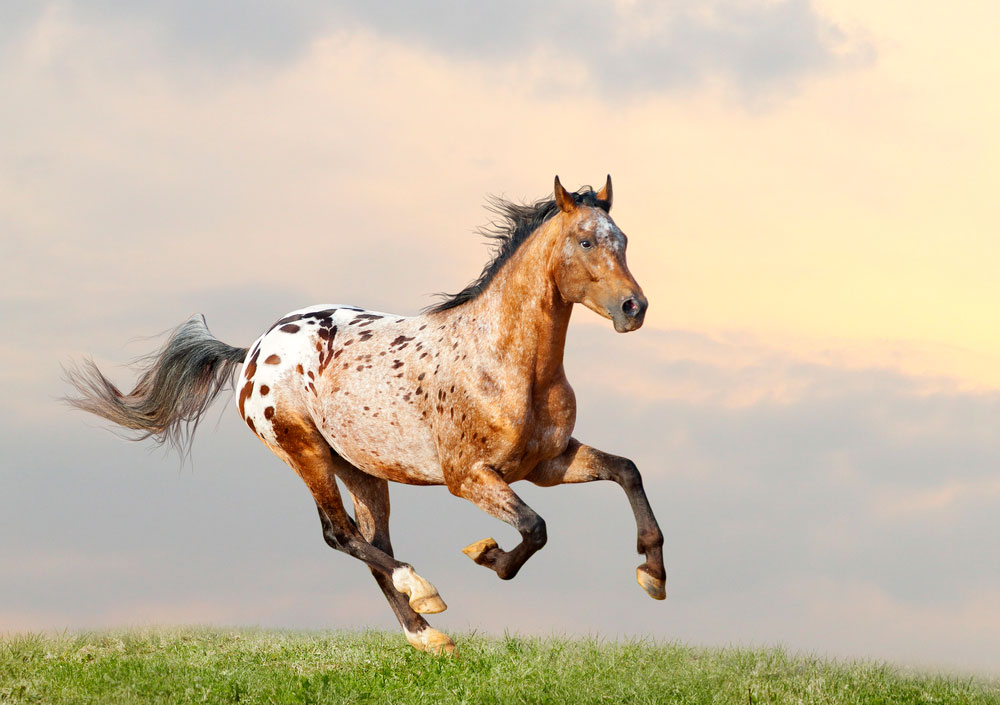 Horses with a spotted coat will grab your heart right away. These are Appaloosa horses, the horse breed that is well-known in the United States. The equines have distinctive features that make them unique and extremely gorgeous. Here’s a detailed Appaloosa horse profile to find if this breed is right for you.

What Is an Appaloosa Horse?

The Appaloosa is a popular horse breed that originated from the United States. It’s famous for its spotted coat pattern. It’s referred to as the leopard complex mutation. The horse has various spotted patterns over the solid base color of the coat. This mutation makes the equine look out of this world.

The history of the Appaloosa Horse traces back to ancient times. Leopard-spotted wild horses were found on the cave paintings of our ancestors. The first mentions of domesticated spotted equines were referred to as Ancient Greece and Persia. Soon after such horses were depicted in France (11th century) and England (12th century).

The famous painting of Louis XIV – the King of France – shows us that leopard-spotted horses have been already used to be ridden under the saddle (16th and 17th centuries). And other sources indicate such horses were used in riding schools, horse shows, parades, and more.

The Nez Perce people were located in Oregon, Washington, and Idaho. They were famous for horse breeding where Appaloosa horses were engaged as well. First, they got horses from the Shoshone tribe in 1730. Soon after they established breeding selection in 1750. The Nez Perce horses were known for high quality. The equines were reported as good-looking, elegant, and sturdy. People were amazed by leopard-spotted horses. The breed was highly expensive so not everybody could afford it.

However, the peaceful time had finished by the 1860s. The Nez Perce people were pressured by limiting their lands. Some of them refused to give up their territory that led to the Nez Perce War in Idaho. They were fighting against the U.S. Army. And eventually, they had to take their livestock including equines, and flee to the Yellowstone National Park in Montana.

The Nez Perce traveled to Montana on their hardy and agile Appaloosa horses. The war ended in 1877. The U.S. soldiers captured more than a thousand horses and sold them. Some of the equines were killed with a shot. When the Nez Perce people settled down, they were allowed to have few horses. Besides, they were forced to crossbreed their equines with draft horses.

Since 1877 the Appaloosa has been forgotten for 60 years. Some of them continued to purebred and they were primarily used as ranch horses. First, they were called Palouse horses because of the Palouse River. It ran through the Nez Perce country. Since then, the name developed to Apalouse and finally, Appaloosa. And it had taken roots by the 1950s.

The Appaloosa horse grabbed the headlines in 1937. The history professor Francis D. Haines published an article in Western Horseman magazine. He described the horse breed information and urged the horse’s preservation. The article brought a strong interest in the Appaloosa horse. As a result, the Appaloosa Horse Club (ApHC) was founded in 1938. The Western Horseman magazine went on supporting the horse breed by releasing related articles.

Appaloosa horses are known for their gentle and friendly temperament. They are easy-goers, thus, they are perfect for beginner riders and kids. The Appaloosa horse is a calm equine that can be used in hippotherapy. It’s a great companion for a patient who has some physical or mental issues.

Appaloosa horses are great pets for kids too. They are willing to please their owner, which is a plus. You’ll definitely have fun with this buddy. The horse is perfect for children who need someone to share their secrets with. The bond between a man and a horse may help overcome insecurity and teach responsibility.

The Appaloosa is a highly intelligent horse breed. They are easy to train and can be used by rookie equestrians. These are versatile equines that are quite docile. That’s why they can be performed in a wide array of equestrian disciplines.

On the other hand, the Appaloosa horse can be stubborn. They may behave aggressively if they don’t like the way you treat them. But once you build a trustful relationship, you’ll get on well with your companion.

As for the conformation, the Appaloosa Horse is easy to spot. It has a leopard-spotted pattern on a solid-base color coat. Other distinctive features include:

The Appaloosa is fascinating and pleasing to the eye breed. It stands out with its distinctive features that make the equine so popular. These are the leopard-spotted coat pattern, striped hooves, and white sclera. The Appaloosa came from the United States but the horse is popular around the globe.

Appaloosa horses are docile and hardy. That makes the breed ideal for a range of equestrian activities. Lots of horsemen perform with the Appaloosa Horse in English and Western riding. You can spot the horse in barrel racing, roping, reining, eventing, and horse racing. They look stunning in matching saddles and bridles. Besides, the breed is used as a working horse.