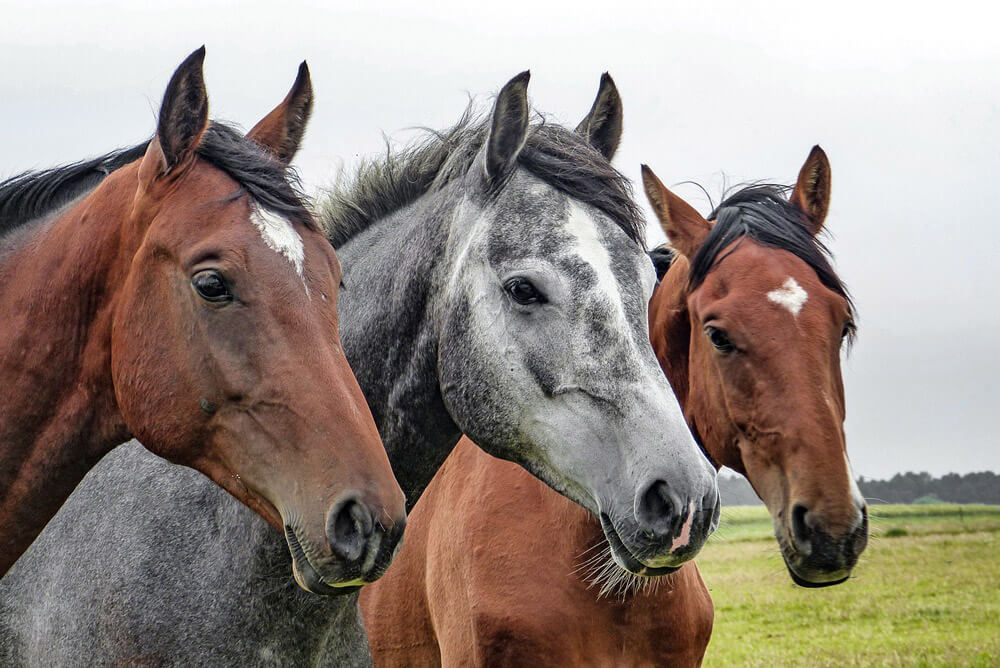 Humans enjoy spending time with horses as they are very intelligent and responsive. Every horseman can find their perfect companion depending on their intentions and taste. There are dozen of horse breeds which are extremely versatile in their temperament, body structure, and color of the coat. Let’s have a look at the variety of common color options that a horse may have as well as his markings.

You might meet horses of a wide range of colors, each of them is truly unique and beautiful. So we made up a list of common horse colors and patterns so you can differ them easily. After you’re aware of various horse color palette, you may find your favorite combo.

Bay is claimed as an intensive brown or reddish color which is the body color. While a tail, mane, and legs are black. The muzzle also can be black as well as the points of ears. Lots of horse owners love such a combination of colors. It’s one of the most frequent coat colors. But there’s also a rare hue that is more reddish and is called blood bay.

The truly black horse has to have no white or red hues on his coat at all. Such horses are as black as coal and it looks extremely stunning, especially how their coat shines in the sunlight. It may seem as it has a slight blue hue as well. In some cases, some horse’s hairs may brighten over time because of the solar constant impact. But the horse is still considered as a black one.

A brown horse is described as the one which has a dark brown coat on his body and light brown spots around the muzzle as well as the inner area of upper legs. Besides, the horse’s tail and mane are black.

Another shade of brown is called seal brown. It’s a deep dark brown hue closer to black. But such horses also have a bit lighter brown spots around flanks, elbows, and a muzzle.

Buckskin may be presented in both light and dark hues of tan. The coat may seem like it’s yellow or a bit gold. The buckskin color is close to dun but the main difference is that buckskin horses don’t have the dorsal stripe, unlike dun horses. In addition, such horses have black mane and tail as well as the points of ears and legs are also black.

The chestnut color of a horse’s coat may vary from light copper to reddish-brown hues. There are no black hairs on chestnut colors. The mane and tail can be the same color as the horse’s body or lighter. In case the tint of a tail and mane is lighter, it’s called flaxen. The points of the legs can also be white. The light chestnut is called sorrel while the dark chestnut color is called liver chestnut.

Dun horses typically have yellow hues of a coat as well as goldish, tannish tints are also presented. The tips of the ears are dark. Besides, the mane and tail are black or brown, sometimes these parts have light hairs (frosting).

Dun horses feature a dorsal stripe – a dark line on the horse’s back. Another distinctive feature is that there are “zebra” dark stripes on their legs. In other cases, the points of the legs are black. In addition, some dun horses may have shoulder striping or shadow as well. Moreover, a cobwebbing may occur on the coat which is dark rings or stripes on the forehead of the horse.

Typically gray horses are those who actually were born with another color (chestnut, bay, etc) and then turned gray over time with aging. Some horses can be born with grey spots around their eyes that are called “goggles”. Another fascinating feature is that gray horses may have lighter round spots all over the body, in this case these horses are dapple grays. Another hue is called rose gray which occurs as a result of aging a chestnut or a bay horse gaining a pinky tint over time.

Palomino horses can range from light creamy to goldish hues of the coat while their mane and tail are white or yellow. Their breathtaking beauty makes them a favorite of many horsemen.

Apart from the color palette, there’s a bunch of various color patterns that are specific to different breeds. Here are three typical color patterning presented.

Appaloosa pattern comes in different variations of colors and spots. The main coat color may be various – black, brown, bay, chestnut, dun, buckskin, and many others. While markings have also a huge variety of options. Let’s mention some of them.

The blanket pattern is one of the common markings. It may seem like there’s a white blanket covered the back and hips of a horse. While the blanket is a light color, the spots on its area have the same basic color as the rest of the coat.

The leopard pattern is easy to distinguish as it features a white basic coat color with distinct dark spots all over the body. The spots have a direction of hair growth and can be accumulated on the legs and head of the horse. The blanket leopard pattern is also presented.

The snowcap pattern is close to the blanket pattern. It usually covers the same spot – the back and hips – but there are no dark spots on the cap. Just a white blanket at the back.

The snowflake pattern is described as the one that has small white flecks all over the coat. The white dots grow over time with their owner.

The frost pattern or roan blanket horses have white hairs concentrated on their neck, back, and hips. The area of the frosting may differ on various horses. The look is similar to the roan horse.

The pinto pattern is distinguished by large patches all over the horse’s body (quite larger than the appaloosa pattern is) of white or sometimes other colors. The dark spots can also be versatile – black, buckskin, brown, chestnut, and others. The black and white horse is typically called piebald. The mix of the rest of the colors is called skewbald. The tricolored horse is the one who has three different colors (usually two of them are white and bay).

The tobiano color is the most common pinto pattern. It’s characterized by the white line along the spine with marks between the withers and on the dock. Besides, the legs are also white.

The sabino pattern features a smaller size of the patches comparing with other pinto patterns. Such horses have white spots on their legs, belly, and face.

The tovero pattern is a combination of tobiano and overo patterns. That means tovero horses may have different spotting patterns on the coat at once. Typically they have dark spots on the face, ears and dock, the eyes are blue while the basic color is white.

A roan horse usually has a dark basic color with little white hairs over the body. The basic color may be different making an even mix with white hairs. The head and the points of the legs are darker than the rest of the parts.

The red roan features a bay or chestnut color coat with white hairs. In some cases, red roan and bay roan may be divided.

The blue roan is a pattern that features a black coat with white hairs which may seem as a blue hue.

The strawberry roan is a mix of a light chestnut color (called sorrel) with white hairs.

Apart from body colors and their patterns, there’s a wide range of marking on a horse’s face, body, and legs.

What Are Bald-Faced Horses?

A bald face horse is not literally bald. It’s an equine that has got a unique white marking on its face. The light marking usually presents on the dark color coat. Every marking is different as well as the horse. A bald-face marking presents from birth and it doesn’t disappear over time. It’s similar to the birthmark that people have. So why bald face horses have white markings?

A white marking covers almost the whole front of the horse’s face. So you’ll notice this unique mark for sure. It usually covers at least one eye and the pigment stretches down the sides of the face. Bald-faced horses are common among the American Paint Horse. As well as other horse breeds that have Pinto coloring.

The cells called melanocytes are responsible for pigmenting. If the horse carries a bald face gene, the melanocytes are suppressed. And the foal gets white marking on its face.

Proper care is needed for bald face horses. Such pinky skin on the face is more likely to get a sunburn. That’s why horse owners must take precautions in hot sunny weather. Another issue your bald horse may face is congenital deafness. If the white marking reaches the inner ear, the lack of pigments affects the hair cells. These cells are sensitive to sound and hence, may cause deafness.

So horses are quite diverse not only in breeds but also in the color palette as well as markings that each horse breed may have. Having various color patterns, these creatures become more unique and exquisite by pleasing the eye of their owners. Here we described the most typical horse colors as well as their patterns but the list can be extended with rarer colorings and markings. We also included a horse color chart to show how different the horse coat color pattern may be. This and other fascinating facts about horses you can find in our latest article.