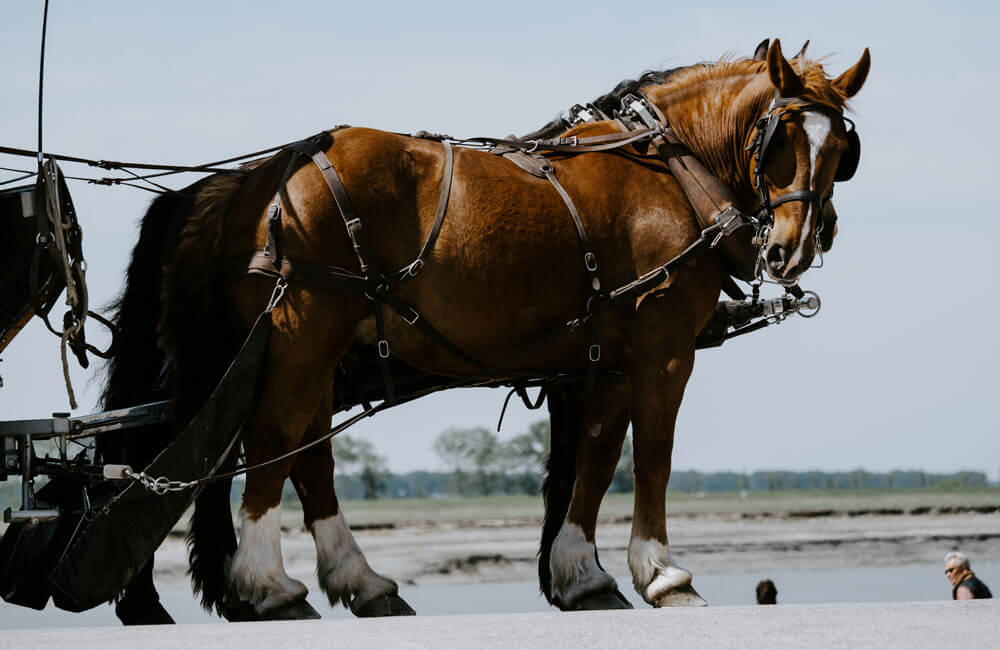 Horses have been bonding with humans for many decades so far; people tend to use them for various purposes. Nowadays we use these graceful and powerful creatures mostly for working and riding. As sundry activities require different skills, a wide range of horse breeds are used in various fields. Moreover, people selectively breed horses to gather the best traits needed in a brand-new breed. Some of the breeds are extremely strong and massive so others might be puzzled on how to take care of them. But let’s leave that to professionals.

This article is dedicated to the largest horses that have ever been in the world. We listed the top 12 gigantic horses whose sizes may blow your mind. Let’s check them out!

And the winner is the Shire Horse which is considered as the tallest and the highest horse breed all over the world. It’s originated from Great Britain and the breed is classified as a draft horse. It was used primarily in working and carriage driving. Now the horse is used for working and trail riding. Apart from UK, the Shire breed is commonly distributed in the USA, Canada, and Australia. But unfortunately, the number of horses has noticeably diminished as a result of World War I and now the Shire is claimed as a breed being in the risk of extinction.

In addition, the record of the largest horse was set in the 19th century when the Shire horse named Sampson was 21.25 hands high and weighed 3,360 lbs.

The Percheron takes the second place being originated from the Perche province in France. Actually, it’s one of the most popular French draft breeds. Firstly, they were used as war horses being strong and durable. Besided France, the breed is commonly distributed to the USA and the UK.

The Clydesdale is a Scottish breed, it’s also a draft horse. It’s typically distributed to Australia, New Zealand, and the USA. The Clydesdale horse, like many other draft horses, was used as a war horse, for farm working, and driving. Now the breed is also used for parades, as a show and carriage horse because of their charming-look feather legs. Thus such breed is quite versatile.

In fact, the Clydesdale horse breed became popular because of being a part of the advertisement made by the Budweiser brewing company. The horse is also highly recognizable due to the brown coat and white feather feet.

The Suffolk Punch is claimed as one of the oldest draft breeds in the UK. It’s originated from the Suffolk country (East Anglia) where the horse’s name came from. The interesting fact is that unlike many other breeds, the Suffolk comes only in Chesnut color.

The horse was typically used as a war horse, on a farm, and for road haulage. The breed is still used in drafting. Currently, they are used for forestry and driving. Unfortunately, the Suffolk Punch is claimed as a rare breed and extremely endangered.

The Medimurje Horse came from Medimurje County in Croatia. This horse is characterized by having the calm temperament and willingness to work. That’s why it’s commonly used in forestry and pulling vehicles. The breed was distributed to Hungary, Slovenia and Austria. But nowadays it’s an endangered horse breed.

The Medimurje Horse is claimed as the tallest cold-blooded breed comparing with other Croatian breeds such as the Posavac horse (14 hands) and the Croatian Coldblood horse (14.5 hands).

The Belgian Draft Horse originates from the Brabant region, Belgium. The breed is deemed as one of the strongest draft horse breeds. They have been used as working horses as well as showing horses. Some horsemen prefer using this breed for pleasure riding as well.

The Australian Draught Horse is a horse draft breed well-known for its extreme durability. The breed came from Australia as evidenced by its name. Actually, the Australian Draught is a result of the crossbreeding four draft horses such as e, Shire, Percheron, Clydesdale, and Suffolk Punch that we already mentioned above.

Being capable to handle the heavy workload while having a graceful look, the Australian Draught Horse is commonly used in both working and competitions. The bread features a calm temperament, they’re quite intelligent and kind, that’s why they’re liked to work with.

The American Cream Horse is the only draft horse bred in the USA. It’s loved for its stunning cream color of the coat that is commonly named as gold champagne. In fact, nowadays the breed is extremely close to being extinct due to farm industrialization.

The breed is typically used for shows and driving being popular for its eye-catching look. Currently, the program has been held by Colonial Williamsburg to increase the breed’s population.

The Dutch Draft Horse or the Zeeland Horse is a cold-blooded draft horse originated from the Netherlands. The type is not purebred, it’s a result of crossbreeding with Belgian Ardennes (16 hands, 2,200 lbs) and Belgian Draft breeds (17 hands, 1,900 lbs).

The horse breed is characterized by a calm temperament and capable to handle the heavy workload. It’s commonly used in farm shows nowadays. Unfortunately, after World War II the number of horses has immensely decreased and now the breed is extremely rare.

The horse was cross-bred by various breeds including Percheron (18 hands, 2,600 pounds) and Orlov Trotter (16 hands, 1,000 pounds) with an aim to develop a compact horse for work on a farm. Currently, the Russian Heavy Draft breed is used in milk and meat production.

The Dole Gudbrandsdal, Dolahest is a draft and harness breed that came from the Gudbrandsdal Valley, Norway. There’s another popular breed – the Dole Trotter – which is quite similar but it’s smaller and faster. Currently, it’s commonly crossbred with Thoroughbred (16 hands, 1,000 pounds), Arabian (15 hands, 1,000 pounds) and other horse breeds to develop a horse suitable for driving and riding.

Originally, the Dole Gudbrandsdal horses were used as pack horses so they helped owners to carry stuff on their backs. Nowadays they’re used for pulling and farm work. The Dole Trotter is commonly used for harness racing as driving activity.

The Norwegian Fjord Horse, the Fjording, or the Fjord came from Norway. It’s smaller than other draft breeds in the list although being quite powerful. It’s claimed as one of the oldest breeds in the world and it’s still very popular by its kind temperament.

The Fjord horses were typically used for pulling and working on a farm. But now they are also popular in riding and driving equestrian activities. The breed features light color shades as well as having cut mane that stands up.

To sum up, there are dozens of various horse breeds in the world. Every breed has its individual characteristics suitable for various purposes. Some of them, which are strong and durable enough, are commonly used for working to help his owner on a farm. Others, who’s got attractive appearance and is well-gaited, take place in different competitions, riding and driving. And some horse breeds are quite versatile and they’re used both for working and showing.

People tend to crossbreed new species of horses to select the best traits and design a breed especially for achieving specific goals. That’s why new breeds appear all the time and current horses differ from their ancestors immensely.

We listed the largest horse breeds in the world that are grasped as multi-purpose horses. The breeds are distinguished from other congeners by their high growth, massive complexion, calm temperament, and intellectual skills.