The Friesian is truly out of this world. This horse breed is associated with grace and beauty. With its marvelous history, the equine is a favorite among horse owners all over the world. The horse is easy to distinguish due to its stunning features. Let’s get the nitty-gritty of the Friesian Horse.

The origin of the Friesian Horse came from the Friesland in the Netherlands. The breed is related to the draft horse. However, the equine is quite agile and graceful. The Friesian is loved for its classy black color and muscular body.

Friesian horses originate from the Friesland – a province in the northern Netherlands. The first mention of the breed is dated by the 4th century. The records depict Friesian troops with their powerful equines. An English writer Anthony Dent mentioned Friesian horses in his piece. He described the breed as the ancestor of the Fell Pony and the British Shire. However, the statement hasn’t been proven.

Another famous illustration is related to William the Conqueror riding the Friesan horse. The masterpiece exhibits the period of the 11th century.

The Friesan used to be war horse. Knights were mounting the equines in Medieval times. Then crossbreeding took place. Since the 12th century, eastern horses were mated with Friesians. Later, in the 16th century, the demand for heavy draft horses declined. Friesan horses were crossbred with Andalusian horses to create lighter horse breeds. They were used as working horses that required less forage and produced less waste. The breed was used as carriage horses as well.

In the 18th and 19th centuries, the Friesan horse was at the top of the agenda. It was popular not only as a farm work horse but also as a race horse. The Friesian horse breed is a foundation stock for the development of many other horse breeds in European countries. They include the Dole Gudbrandsdal, Morgan Horse, and Norfolk Trotter. The breeding took place to develop lighter and faster horses. The tendency to breeding pureblood stock returned in the 19th century. 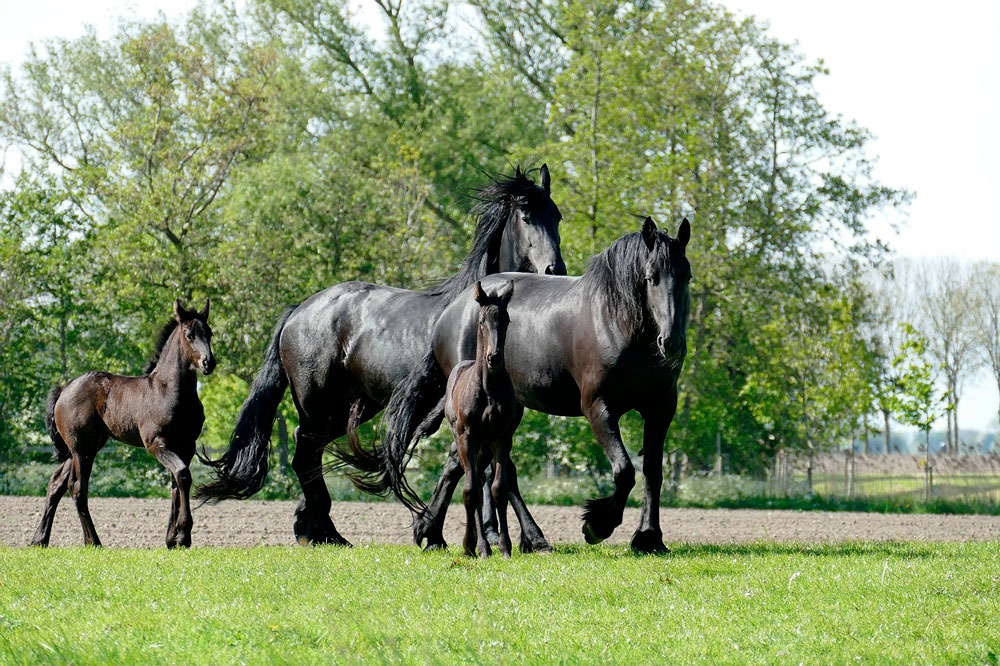 In 1879 an association named the Fries Rundvee Stamboek (FRS) was founded by Frisian horse owners. They published the horse studbook in 1880. There were registered Friesian horses as well as other warmblood breeds. At that time, the Friesians were usually crossbred with Ostfriesen and Alt-Oldenburger horses. This affected the pureblood horse population negatively. In the 19th century, society worked on revival the horse breed.

In 1907 the FPS was renamed the Friesch Paarden Stamboek (FPS). It included the registry of both Friesian horses and non-Friesians. By 1915 the association was split up into two groups. As a result, non-Friesian horse owners founded the Royal Warmblood Studbook of the Netherlands (KWPN) in 1943.

Horses began to be replaced by gas-powered machines on the farms. The main reason the breed was kept by farmers was to help carry the dairy cattle. However, World War II slowed down the replacing process. That helped to revive the population of Friesian horses. Another significant step forward in breed recovery was engaging Friesian horses in shows. Circus Strassburger discovered excellent showing skills in the breed. The Circus was extolling their top-notch performance ability outside the local area. 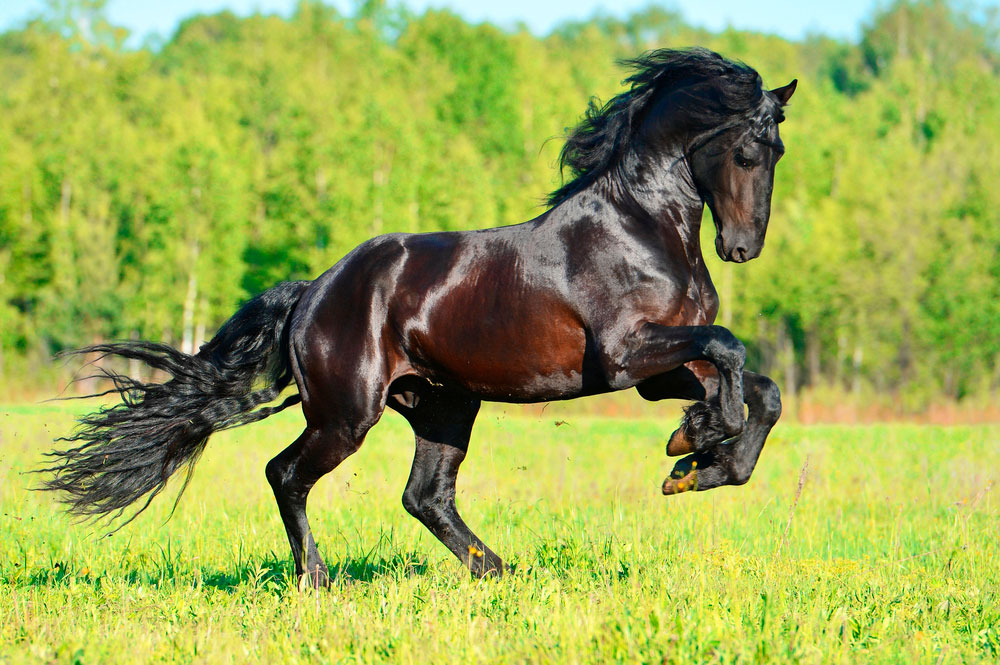 Friesian horses were used as war horses. You may feel that power and fierceness. However, the breed has a calm behavior. Friesian horses are sociable animals that can get on well with their riders. They are eager to please their owner so you’ll definitely have fun with your companion. They are also willing to work that is beneficial for horse trainers.

The temperament of Friesian horses is advantageous for riders of all levels. Due to the traits, they can be used as equines for beginners as well as professional equestrians. The equine can be the best friend for riding kids too.

The Friesian Horse Breed often performs in dressage. Its muscled body, beautiful hair, and graceful look are great benefits for such a competition. Adel 357 is one of the most popular Friesian stallions. It’s the first dressage Friesian horse competed in the International Grand Prix. Since then, many representatives of the breed have partaken in dressage. 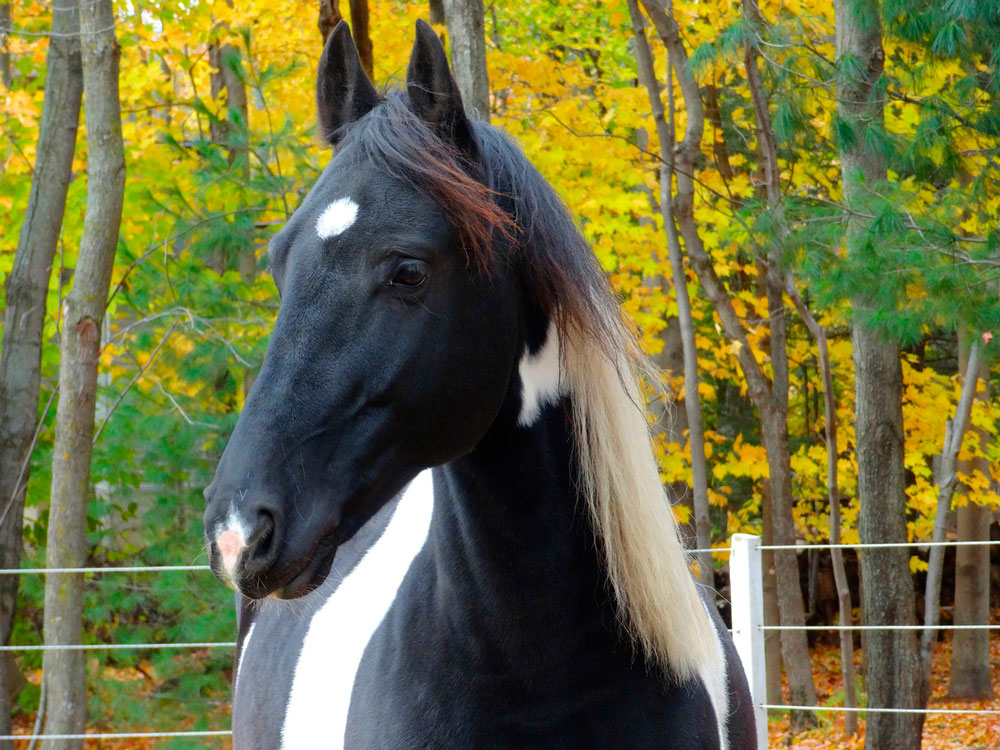 The breed is recognized by its shiny black coat. This feature makes the horse look stunning. In fact, it’s not the only breed conformation characteristics. There are also Friesian horses of other colors. There can be chestnut and bay color equines. The American Friesian Association allows registration of chestnut Friesian horses. Some horses have white markings on the head, body, and limbs.

The Friesians have compact sporty bodies with strong hindquarters. The limbs are short but powerful. The breed features its shiny coat with a thick mane and tail. In most cases, the hair is wavy. There’s feather (long hair) on the lower legs that perfectly complements the look.

The Friesian horse is also loved for its gait. It features its stepping trot, which is a two-beat gait.

As for the temperament, Friesian horses are athletic and docile. Such animals are willing to work and please their riders. They are extremely active and energetic. The Friesian’s commanding presence and grace are spellbinding. Such traits are something that makes the breed quite versatile in use.

The Friesian Horse height is 15.3 hands on average. The range goes from 14.2 to 17 hands. To pass the star designation process, the equine must be at least 15.2 hands tall.

The horses are compact and bulky. The average Friesian Horse weighs around 1,200 – 1,400 pounds.

The common lifespan of Friesian horses is 16 years. It’s a relatively average life expectancy. As some horse breeds, like the Appaloosa Horse, can live up to 30 years.

The Types of Friesian Horse

The Friesian horse breed conformation has been significantly changed through the centuries. The KFPS association has reviewed the inspection plan regarding the strict selection of the stallions. All the changes due to a range of circumstances must be taken into account. Nowadays, the breed includes three distinct types of Friesian horses. 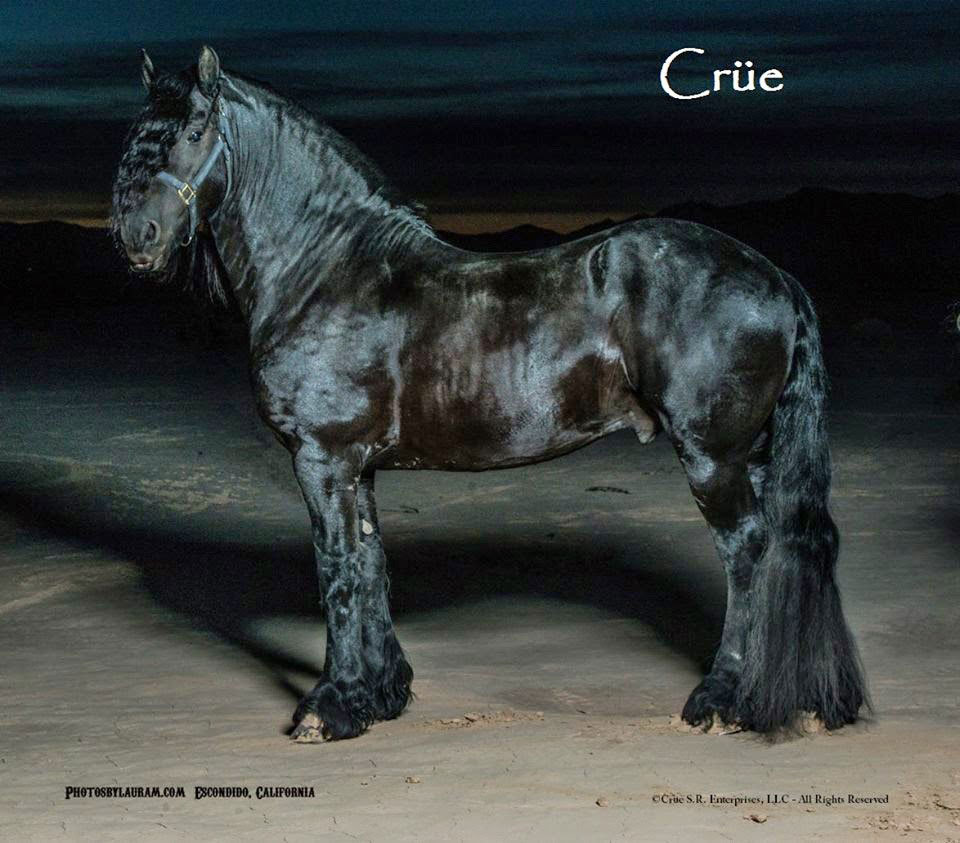 It’s a classic type of Friesians. The horse stands out with a strong bone structure. The body features an ample and bulky size. Baroque Friesians have shorter limb lengths to the body height ratio. The length of the body is bigger than the height. The body has a rectangular shape on its side. 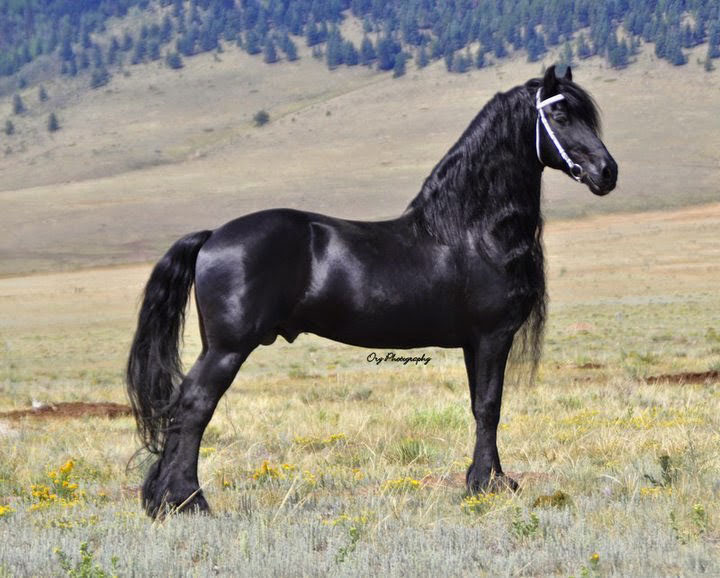 The horse has an ample body like the Baroque type. But the ratio of the body to the legs is equal. So the body has a square shape on its side. The bone structure is thinner in the classical type. Stallions feature a developed crest. The barrel and hips are leaner than those of Baroque Friesians. 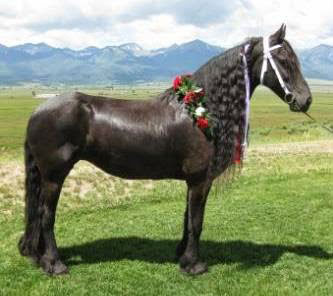 The Sport type has a leaner body density. The bones are lighter as well. The legs are longer than the body length. The body has a rectangular shape on its side. Such a type is more common in horse shows. It’s known for its high knee action. They look fascinating tacked up with matching saddle pads and protective boots.

How Much Does a Friesian Horse Cost?

A Friesian horse costs around $20,000 and more. That’s an average price for a young and healthy equine. You can find the price tag as low as $5,000 though. But if you’re looking for a registered breeding Friesian stallion, get ready to fork out about $200,000 for him. The Friesian is a pricey breed but it’s definitely worth every buck. 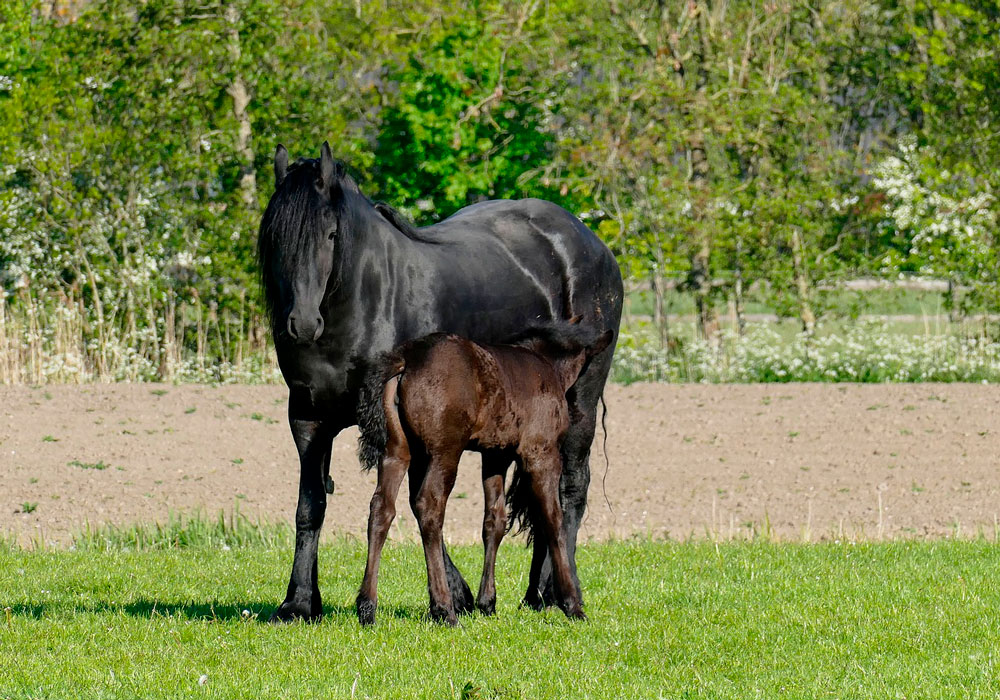 Friesian Horses are amazing equines that are loved all over the world. All the horse lovers are spellbound by their fierceness and beauty.

The first mentions of the breed go as far as Roman times. The equine was developed in the Netherlands. It’s one of the oldest breeds in Europe. The animals were primarily used as working horses but nowadays the range of uses is versatile. Friesian Horses are commonly engaged in dressage, harness, driving, races, and parades.

Because of the outstanding coat color and mane and tail beauty, the breed often appears in movies. The experience of working with Friesian Horses is delightful. As the equine is docile, outgoing, and easy to train.

David Garcia is a vivid writer and a big fan of equestrian sports. He founded Horsezz – the blog where David shares his knowledge and experience about horses, tack, equestrian riding equipment, taking care of horses, and other useful guidelines.
PrevPreviousAppaloosa Horse Temperament and Characteristics
NextAndalusian Horse Facts (Temperament and Characteristics)Next