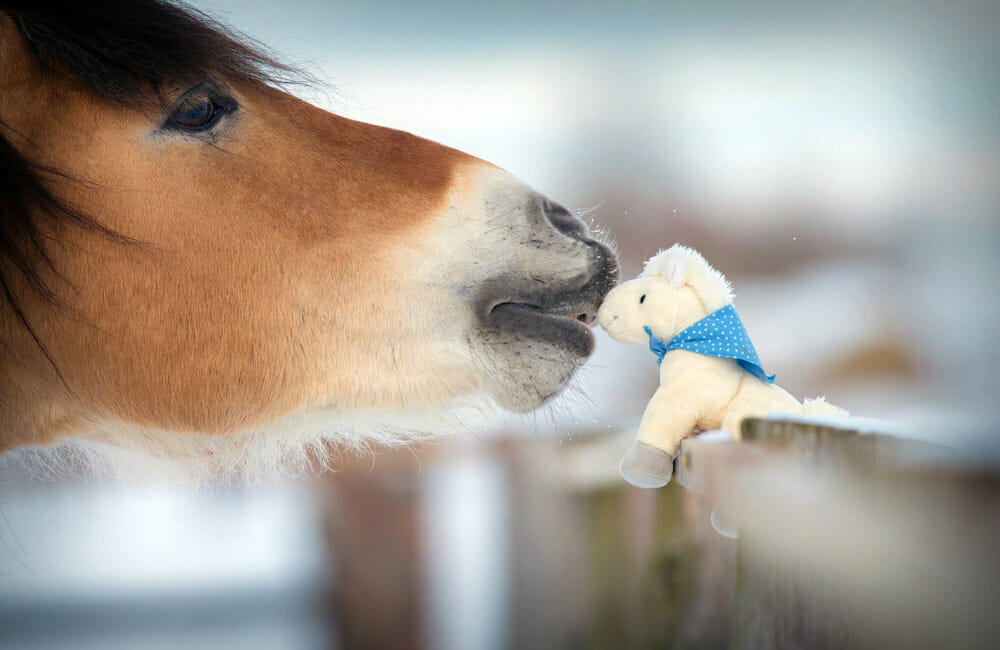 Getting the hang of equine anatomy is a crucial part of horsemanship. The horse’s body has various distinctive features that every equestrian should know. If you’re wondering what the main body parts of a horse are, this article is right for you.

Before we plunge into the horse anatomy and digestive system, let’s get familiar with specific terms.

Here’s a horse model that clearly illustrates the main parts of a horse.

As for the external horse anatomy, the major body parts include:

Now let’s get all the nitty-gritty about these parts of a horse.

The muzzle is the horse’s body part that includes the chin, lips, mouth, and nostrils. This part of the horse is quite sensitive. There are whiskers that help “feel” the surroundings. The rest of the area is hairless.

The mouth is the part where the bit is placed. It helps to control the horse, however, some riders prefer bitless bridles.

Chin groove is the part of the head that lies behind the lower lip and chin.

The windpipe and the head meet at the point of the throatlatch, under the jaw. That’s where one of the horse bridle pieces goes.

Horse nostrils are rather big and flexible. A horse tends to flare its nostrils while working and exercising. Flared nostrils when the animal is relaxed may be a sign of curiosity or fear. Pinched nostrils may show the horse is angry or irritated.

Horses have an excellent smell, better than humans. It plays an important part in learning the surroundings. A horse can get many out of the world with the help of this sense. An equine can smell a predator or other horses in the distance.

Horses have big eyes with a dichromatic vision that is sometimes called two-color vision. Humans have trichromatic vision. A horse sees blue and green colors as well as their hues. But horses can’t distinguish the red color. That’s similar to human’s colorblindness.

Another essential part of horse eyesight is that they have binocular and monocular vision. Binocular vision means horses use two eyes to spot the same direction. Monocular is used to see in two different directions.

There’s a blind spot just in front of the horse and immediately behind its head.

Some horses have white markings on the forehead. They are unique to each horse like human fingerprints. Although they have similar shapes on the like of a star, strip, blaze, etc.

Equine ears are quite flexible. They can tell us a lot about how the horse is feeling. The ears are used to hear as well as communicate with their peers.

For instance, alert ears mean the animal is attentive. And the ears turned out to the side means the horse is relaxed. If the ears are constantly moving back and forth, the animal is trying to catch the source of the strange noise.

The poll is the body part of the head that goes immediately behind the ears. It’s the highest point of the skull. This area may be flat or bumpy. Lots of nerve endings are placed here.

With uneven contact of the rider to their horse, the poll may become crooked. Thus, a regular vet check is a great way to promote proper muscle development.

The crest is the topline of the horse’s neck where the mane grows. That’s a gentle curve that goes from the poll to the withers. Overweight horses tend to have a cresty neck.

The shoulder is a bone that joins the withers with the chest. The angle of the shoulders affects the horse’s moves. There are special techniques that help to free the shoulders to lengthen the horse gaits.

Depending on the type, the rider needs a special saddle. High-withered saddles are great for equines with bumpy shoulders and a tall back. Low-withers are sometimes called mutton withers means the area is less massive.

It’s a muscular area between the withers and the loins. A horse saddle sits on the horse’s back as well as a saddle pad. This part is powerful enough to withstand and support a rider.

The rib cage is an integral part of the back that supports the weight of the rider.

The loin is the lumbar area merely where the saddle sits. This is a part between the last rib and the croup. It’s a muscled part of a horse that carries power from the hind legs.

The croup goes from the top point of the hindquarters to the tail. The area is sometimes called the rump.

The beginning of the horse tail is called the dock. It’s where the tailhead joins the rump. Long hairs below the dock are called the skirt.

The tail is a part of a horse that consists of the skirt and the dock. Horses use the tail to ward off the insects. Depending on the moves of this part of the horse, you can understand that animal’s state. A slightly raised tail is a sign of alert and constant swinging means the equine is annoyed.

The thigh is the top part of the hind legs. These horse body parts affect the shock-absorbing function.

The gaskin is a rather muscular part of a horse between the stifle and the hock.

The hock (gambrel) is the biggest joint on the hind leg. It consists of smaller bones that create an angular shape. The joints and the soft tissue are also referred to as the hock of a horse.

The hock joint is deemed as the biggest joint in the equine’s hind leg.

The hooves are the body parts that are placed on the front legs and the hind legs. Regular hoof check from a farrier is a must to prolong the equine’s well-being. It’s one of the most significant parts of a horse.

The main parts include the hoof wall, the frog, the sole, the white line, and the periople. The navacular bones and pedal bones are parts of the inner structure of the hoof.

It’s the underneath of the horse’s body where the mares are carrying foals. The part that the rib cage is attached with is the barrel. The girth is tacked under the barrel so the saddle sits tightly.

The chest goes from the bottom part of the neck to the top of the front legs. The shape of this part of a horse depends on the rib structure. Horses tend to have a narrow or wide chest. This part affects the movement of the front legs.

The heel is a part of a hoof on the palmar side. Heels are split by the frog – the V-shaped area of the hoof.

The coronet is a soft tissue at the top of the hoof. It’s compared to the human’s cuticle of the fingernail. The horse hoof wall grows from this part.

The pastern goes between the fetlock and the top of the hoof. It’s like a human’s toe. The long and short pastern bones create the pastern joint.

The cannon bone is between the knee or the hock and the fetlock. It’s also called the shin. Horse protective boots are usually tacked on this place.

The knee consists of a range of little bones. It bends like a human knee but the structure is different. The knee that is also called carpal join is on the front limbs. These are crucial horse parts as they maintain stability and shock absorption.

The forearm goes from the elbow to the knee.

The breast is the muscled area of a horse placed at the front of the chest. The breast collar is tacked here to keep the saddle firmly.

The neck of a horse goes from the shoulders to the withers. Seven cervical vertebrae are placed here. The shape can be different in various horses. The top of the neck is called the crest where the mane grows.

A horse is a graceful creature with a unique body structure. Here, we outlined the major horse body parts that every horseman should know about. This will help to understand the behavior of a horse and prevent issues like a rearing horse. Keep your horse healthy and you’ll get an excellent companion for many years.