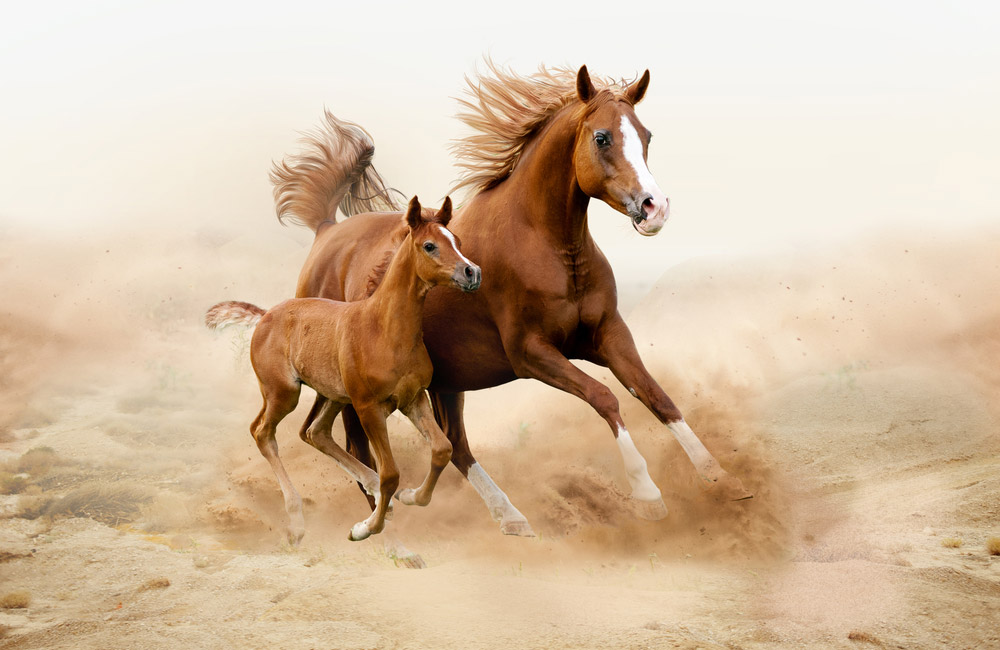 The Arabian is also called the Arab horse. The breed came from the Arabian Peninsula in Western Asia. It’s one of the most popular horse breeds all over the globe. Wars and trade provided the worldwide spreading of the breed.

Horse breeders have been used the Arab Horse to create new breeds. They are loved for their agility, speed, endurance, and refinement. That’s why the Arabian bloodline can be found in a range of pedigrees. For instance, the Andalusian Horse was crossbred with the Arab horse.

As the horse has been crossbred with other breeds, various crosses have been registered. Apart from the purebred Arabian Horses, you may face Half-Arabians. There are Arabian-Thoroughbreds, Arabian-Quarter Horses, Arabian-Welsh Ponies, and more. Some of the Half-Arabians are approved to be registered.

Arabians are superb horses with easily recognizable characteristics. Let’s check them out.

The Arabian horse is a popular breed because of its fascinating traits. The equine is calm and kind, unlike most other hot-blooded horse breeds. They can be used by beginner riders as well as experts. Arabians are friendly to children too. They are ideal family horses. The equines are pretty safe to use as the very first companion.

Arabians, like Thoroughbreds and Akhal-Tekes, are hot-blooded horses because of their high spirit. These are highly energetic equines that are commonly used for racing. That’s why some equines may be stubborn and even aggressive. Actually, the horse’s demeanor directly depends on the way the horse owner treats their companion.

The horse breed is quite intelligent. That’s why the equine is suitable for various training practices. They are great learners. Hence, the animals may become champions in their discipline. Keep in mind that the Arab horse can’t stand an abusive attitude to them. But once you handle the equine, it will be your best friend.

As for the Arabian Horse conformation, it’s widely recognizable. The equine has a small head with wide nostrils, big expressive eyes, and little ears. The neck is long and arched. The back is short but strong and massive. The limbs are long and strong with solid hooves.

Other features are a long croup and a high tail carriage. Arabians have solid bone density. The hindquarters structure can be different. Some representatives come with muscled hindquarters that are more suitable for reining. While the leaner equine is best as a race or an endurance horse.

Arabians are prone to have genetic disorders. Some of them are fatal. A range of inherited diseases is common not only for the Arabian Horse. They appear in many horse breeds. They include the American Quarter Horse, the Appaloosa, and the American Paint Horse.

One of the common health issues is related to Severe Combined Immunodeficiency (SCID). This disease affects foals as they are born with a weak immune system. This leads to no protection from infections. Such foals live up to three months only.

Another disease you should keep in mind is Cerebellar abiotrophy (CA). Affected foals show signs of head tremor and incoordination.

The most common colors are grey, chestnut, bay, and black, and roan. They are accepted by the Arabian Horse Association. The breed is highly desired for its smooth and elegant gaits, each move is neat and coherent.

In fact, all Arabian have black skin. No matter what the horse’s coat color is, the skin has the same color. That’s because the horse breed was developed in desert conditions. The black skin provides protection from the sun. However, some equines may have white markings on the skin and coat.

You may face an Arabian horse with a white coat. But actually, this is a grey horse. Such animals carry the grey gene but look like white horses.

Speaking of spotted patterns, Arabians may have Sabino coloring. The Sabino pattern stands out with white spots with flecks above the hocks and knees.

The United States Equestrian Federation (USEF) set the breed’s standard. The Arabian horse height is 14.1 to 15.1 hands tall. Even though the Arab is shorter than 14.2, it’s still referred to as a horse, not a pony. Ponies are equines with heights of 14.2 hands or less.

Some people believe that the Arabian horse is weak due to its small size. The truth is the equine has a solid bone density. The animal can withstand a heavy workload and high intensity. Arabian horses are little but mighty. They are highly durable and strong. Despite Arabians are a light horse breed, they can work hard like a draft horse.

An average Arabian horse weighs from 800 to 1,000 pounds. They are capable of carrying a heavy rider. The breed features fine hooves and strong limbs.

The Arabian is a speedy breed. The average Arabian Horse speed is 35 mph. The fastest time ever recorded is 40 mph. That is impressive! Horse enthusiasts love this equine not only for its graceful look but for its physical characteristics too. Thus, the breed is often used for endurance riding and racing. The horse’s energetic nature is highly beneficial.

How Long Do Arabian Horses Live?

The Arabian Horse life expectancy is about 30 years. These animals are long-livers. The Arab is an excellent farm and family horse that will serve for long.

How Much Is an Arabian Horse?

The Arabian Horse price goes from $5,000 to $30,000. Some top-notch representatives can be worth $100,000 and more. The average price for an Arabian horse is $10,000. The price range varies because of many factors. They include the equine’s age, well-being, health issues, pedigree, etc. Here’s the detailed guide on Arabian Horse price.

Arabian Horses are powerful and speedy equines. They are popular all over the world for their fascinating characteristics. The animals are athletic and hardy. The Arabian is used in many equestrian disciplines. They include racing, horse shows, jumping, eventing, and dressage. The common Arabian Horse tack equipment is a saddle, saddle pad, cinch, and bridle.

The Arabian has taken part in the breeding of many other equines. As horse breeders like the traits of Arabians. These animals are agile, energetic, and durable. Equestrians take the fullest advantage of such features.