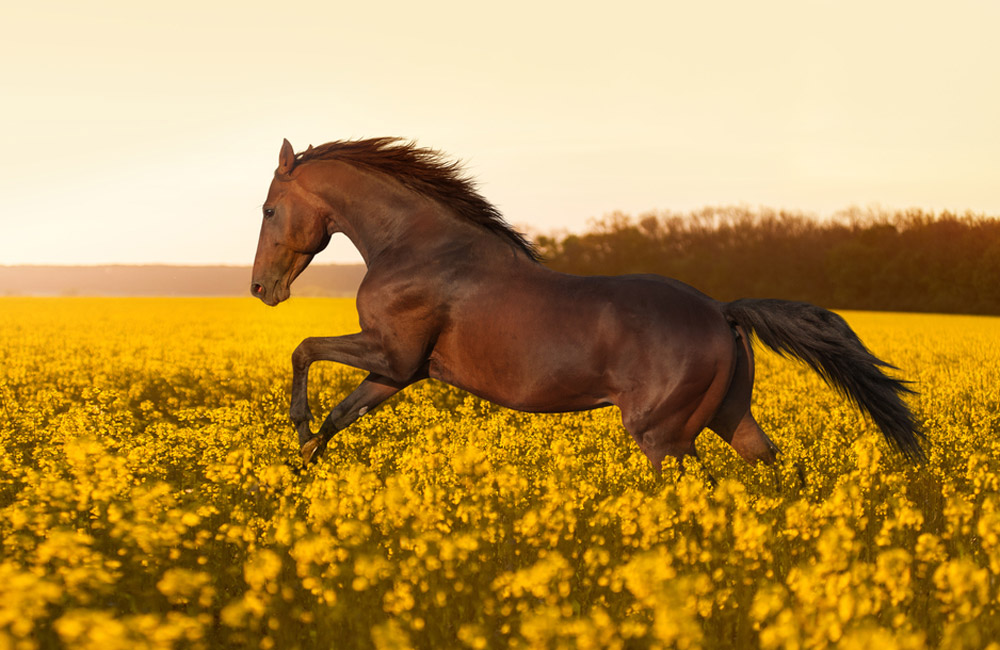 The Mustang Horse is a living symbol of the United States. The breed tends to herd in isolated populations spread all over the states. Here’s a detailed overview of the Mustang Horse breed and its characteristics.

What Is a Mustang Horse?

The Mustang is claimed free-roaming horse breed. Mustangs descended from domesticated equines, though they are roaming animals like wild horses. But Mustang horses are feral horses. Thus, they are not referred to the wildlife. The Mustang Horse height is 14 to 16 hands. They weigh around 800 pounds on average.

Modern Mustang Horses originated from Spanish equines. There were first brought to the New World with conquistadors. According to the North American Colonial Spanish Horse Update, Colonial Spanish Horses are referred to as Spanish Mustangs. The horse breeding of Spanish equines on the territory of the US started in the 16th century. The Mustang population has actively been broadened in the southwestern United States since 1598. It started from Juan de Oñate who founded Santa Fe de Nuevo México that year.

During that time, some western Mustangs moved to the southeastern United States. They are believed to partake in breeding Florida horse breeds like the Florida Cracker Horse and Choctaw Horse.

Since the 17th century, Native Americans also have taken a solid part in horse breeding. They used to integrate their equines in farming and transportation. Horses became pack animals instead of dogs. As equines are hardy, they are able to carry a rider on a saddle or a pack of weight on their back. Horse owners became using horses for hunting as well.

The Spanish used Natives as servants to watch the livestock. Thus, they had to learn some horseriding skills. As the Spanish tended to keep their horses unfenced, some equines were stolen from those regions. Even though most of those horses were sold for food, some individuals kept them to use in farming. These powerful equines are capable of pursuing herds of bison.

Horses were traded from New Mexico to North America. Some of the Native tribes stated selective breeding for trading. For instance, the Nez Perce people are famous for developing the Appaloosa Horse, one of the most popular horse breeds in the USA.

The horse population had been escalating rapidly by the 19th century. By 1805, there had been so many equines in California so people had to kill unwanted animals.

The French did their share in the Mustang population. Even though trading with the Natives was prohibited, by 1770 some Spanish horses had been found in those regions. At that time, Canadian Horses were crossbred with Spanish Mustangs. They were roaming horses that were moving freely. They reached the North and North-West lands.

By the late 1700s, horses had spread widely. There was no strict human control regarding equines’ moving. As a result, the largest numbers of the Mustang Horse population are located in modern Texas, Colorado, Oklahoma, and New Mexico.

In 1839 the numbers of Mustang Horses in Texas increased badly. That’s because of Mexican settlers who were said to leave the Nueces Strip. The numbers of equines were abandoned in that region that were hard to estimate. Some of them were trailed to the North and East.

In the 1900s, dozens of free-roaming equines were used as war horses in the Spanish–American War and World War I. That led to knocking off the horse population. In 1920, Bob Brislawn founded the Spanish Mustang Registry to preserve the original Mustangs.

Since then, the Bureau of Land Management has been formed to manage livestock on public territories. The representatives were committed to getting rid of feral horses from their lands.

By the 1950s, the population of Mustang Horses had been significantly decreased. That’s because of abusive acts against equines. Regular hunting and poisoning led to the population cut back. To increase the feral horses’ protection, the Wild and Free-Roaming Horse and Burro Act of 1971 was established. The Act provides protection for Mustangs and other feral horses and burros.

The North American Mustang Association and Registry (NAMAR) was organized in 1986. It’s the official Mustang Registry that developed the Mustang Horse breed’s standard.

The Characteristics of a Mustang Horse

Colonial Spanish Horses are referred to as original Mustangs. Modern Mustang Horses are different as a range of horse breeds were added to the bloodline. This led to a variety of horse phenotypes.

In general, the Mustang Horse is hardy and muscular. It features a surefooted walk that can deal with rough terrains flawlessly. This makes the animal an ideal working and trail horse.

According to the Bureau of Land Management, light horses are more common. However, some draft horse representatives also take place. Besides, you can find some equines with distinctive features from the Thoroughbreds.

The American Mustang Association sets the breed’s standards. They state the Mustang Horse has a refined head with a well-proportioned body. The forehead is wide and the muzzle is small. The face has a straight or convex profile. The withers are of a middle-height. The shoulders are long and sloping. The back is short and muscular. The croup is rounded. The legs are straight with a sound walk. The horse’s tail is low-set. The hooves are dense and round. Every body part is symmetric.

Even though Mustangs are feral horses, their temperament is truly wild. Horse owners claim the Mustang is highly intelligent. The horse stands out with its distinctive personality, unlike some domestic equines.

Mustangs exhibit impressive wisdom. As feral equines, they are careful about their peers. Rookie horse owners may struggle with bonding with such animals. Mustangs can show such traits as rebellion and stubbornness. Thus, look for a young equine that is easier in training. Such equines are fast learners.

Having said that, the Mustang can be docile. Once you gen on with the equine, you’ll end up becoming superb partners. As a herd animal, Mustangs tend to care for each other. The same goes for the relationship between horses and riders.

The Mustang Horse height is 14 to 16 hands tall on average. Some experts claim that the small size of Mustangs resulted from their harsh natural living conditions.

The Mustang Horse weighs 800 pounds on average. The range usually goes up to 1000 pounds. That’s a typical weight for a light horse like the Tennessee Walking Horse.

The Mustang Horse lives up to 40 years in the wild, which is impressive. These animals are long-livers.

Mustang Horse can have any coat colors. The wild horses of a dun color are a common sign of Spanish Horse traits. They can also be bay, chestnut, black, pinto, and roan. Primitive markings like dorsal stripe can also occur in Mustang Horses.

How Fast Is a Mustang Horse?

A Mustang gallops 25 to 30 miles per hour on average. That’s a common speed for an equine. The fastest galloping Mustang was recorded with a speed of 55 miles per hour. The horse took part in a short sprint distance competition.

Sometimes a Mustang is hard to distinguish among other breeds. That’s because the modern Mustang has a variety of bloodlines in its pedigree.

The Quarter Horse features a bigger croup. The horse has a more massive back which is muscular. That’s done so the Quarter Horse can reach incredible speeds over a short distance. The American Quater Horse is commonly used in cutting and barrel racing. The horse’s conformation gives them an edge to make fast sprints and turns.

How Much Does a Mustang Horse Cost?

So, how much is a Mustang Horse? The Mustang Horse costs $1,000 to $3,000. That’s an average price charged by private sellers. You can find a horse for no more than $1,000 that is already trained and ridden under the saddle. The equine is versatile in uses, which is a great perk.

The Bureau of Land Management provides Mustang Horses for adoption. That’s done to save the numbers of equines on the lands administrated by them. However, there are strict rules that you have to follow to get the green light. The adoption requirements include a specific type of fencing, sheltering, and transportation. Besides, most of the equines and new to training.

Mustang Horses are feral horses that are protected by the law. These are incredible equines that are different in characteristics. Spanish horses played a great role in developing modern Mustangs.

Riders are amazed by the horse’s agility and learning abilities. Such equines are great helpers for ranchers. There are also used for pleasure riding. The Mustang Horse Price goes from $1,000 to $3,000. Mustangs can also be adopted. However, special care is needed for such feral horses.