The Shire is a British horse breed that features its extra-large size. There are even more interesting facts about these horses. Thus, we made up this breed overview to get more information about the Shire Horse temperament and characteristics.

What is a Shire Horse?

The Shire Horse is a horse breed derived from the UK. It’s one of the largest and tallest draft horse breeds. The equines were commonly used as working horses. They were powerful enough to pull farm equipment. Nowadays, Shires are also used for leisure riding and forestry. The Shire height is 16,2 to 18 hands tall and weight is around 1,800 to 2,500 pounds. 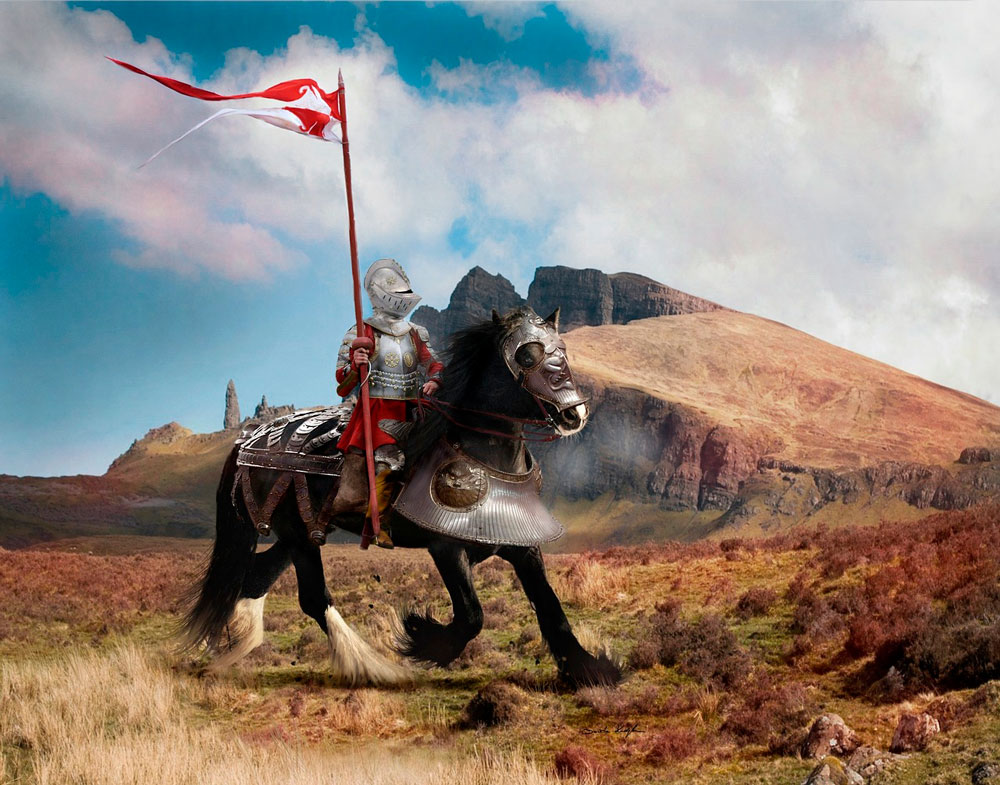 Shires were commonly used in farm work. These animals were excellent for pulling, plowing, and as dray horses. The first mentions of using a draught horse in farming in London were as early as the 12th century.

In the 16th century, Shires were used as war horses. Stallions were transporting gunpowder to the battles. This draft breed was still more favored in farm work though.

Robert Bakewell, an English selective breeder, improved the Black Horse. He created the so-called Bakewell Black. Bakewell aimed to develop the mare’s line. He brought Flanders and Dutch mares to England. This led to developing two Black Horse types. The Lincolnshire type was larger with longer hair. While the Leicester type was more durable. All this crossbreeding led to creating the Shire breed.

The Packington Blind Horse was a well-known horse. The equine was from Leicestershire, the Midlands, England. The records spotting the Packington Blind Horse traced back from the late 18th to early 19th century. It’s a foundation stallion for the Shire draught horse. Shires began to be used as cart horses to carry heavy weights. Large and powerful horse breeds were needed to overcome long distances.

The year 1878 is known for forming the English Cart Horse Society. In 1884, it was renamed the Shire Horse Society. It created a stud book registry taking records from 1770. 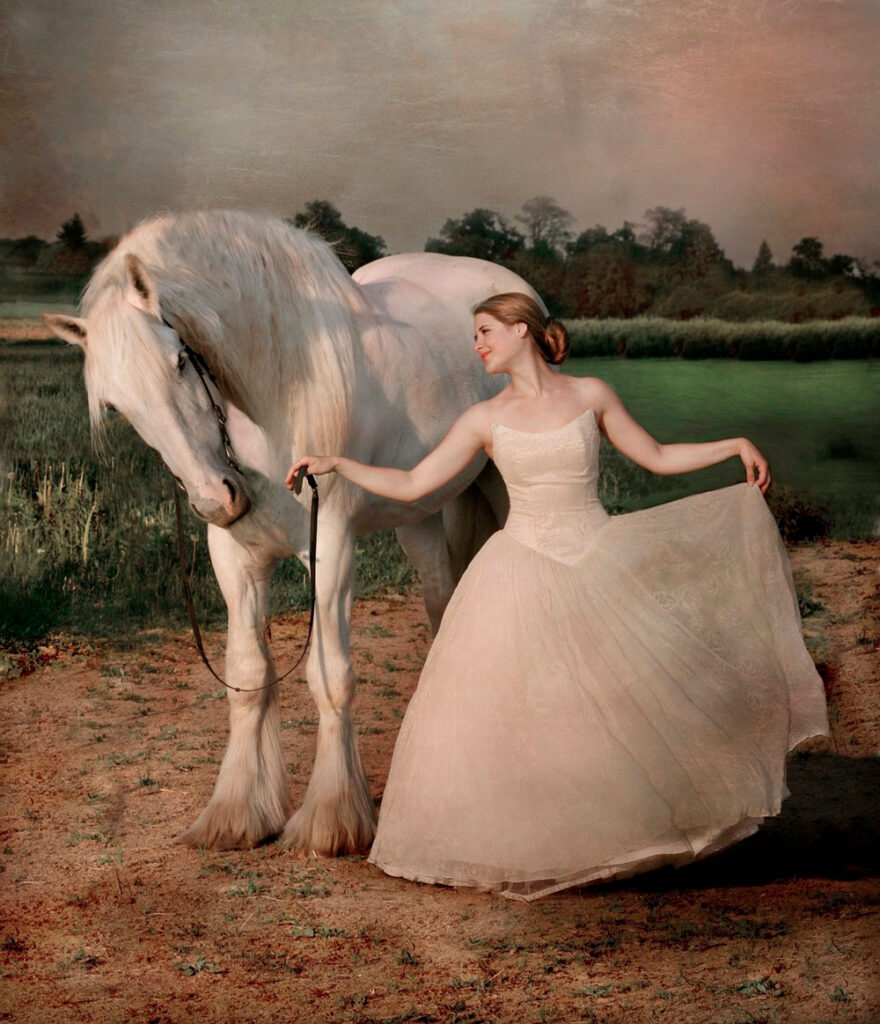 The Shire began to spread their horses to the world. In 1853, the equines were brought to the United States. As a result, the American Shire Horse Association was formed in 1885. It aims to promote information about the horse breed in the states. Since the 20th century, the Shire has become a popular draft horse.

The horse population has significantly decreased during the times of World War I and World War II. Draft horses were in demand for their great strength. There were taken from farmers to be used in battles. The animals had to pull weapons and aid supplies. Shires were transporting wounded soldiers to hospitals.

After the Second World War, many draft horses were slaughtered. As such equines were not easy-keepers. Strict regulations regarding buying feed for horses and cattle led to shutting down breeding studs. The mid-20th century was a dark time for Shire Horses. The numbers went down to hundreds.

Since the 1970s, the Shire draft breed population has improved. The first World Congress took part in 1996 in Peterborough, England. It aimed to draw public attention to Shires. In 1997, a few Australian mares artificially inseminated.

Since the 20th century, several horse breeds have partaken in developing the Shire breed. The study shows the conformation of the animal has changed. In the 1950s and 1960s, the Clydesdale Horse was crossbreed with the Shire. The modern Shire came with its distinguishing silky feathering on the feet.

Today the Shire population number is not as big as it was before. The American Livestock Conservancy claims the Shire list as “critical”. 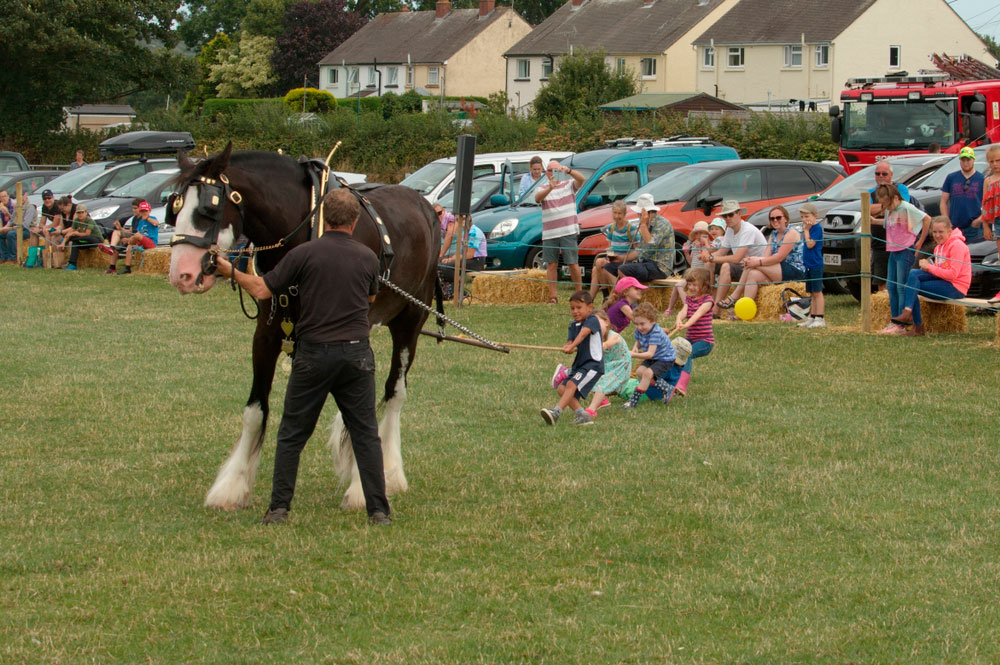 The Shire has an easy-going temperament. They are calm and gentle. The animal is generally patient that makes the breed friendly to beginners. Such draft horses are hard workers. That’s why they are excellent for farm work and horseback riding.

Most horse owners experience having placid Shires. Being a cold-blooded draft breed, the Shire is willing to work. Besides, it’s a good way to introduce kids to horses. 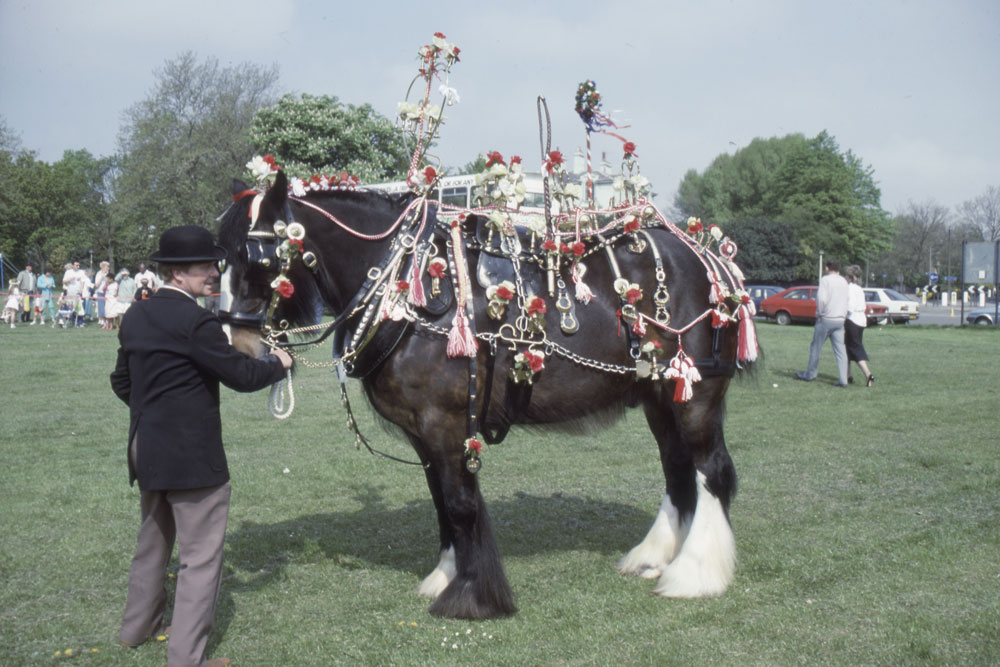 The Shire is the tallest and the highest horse breed in the world. It’s originated from the UK and the breed is classified as a draft horse. It was commonly used in working and carriage driving. Now the horse is used for working and trail riding.

Apart from the UK, the Shire breed is commonly distributed in the USA, Canada, and Australia. But unfortunately, the number of horses has noticeably diminished as a result of the First World War. And now the Shire is at the risk of extinction.

In fact, the record of the largest horse was set in the 19th century. The Shire named Sampson was 21.25 hands tall and weighed 3,360 pounds. These numbers are impressive! 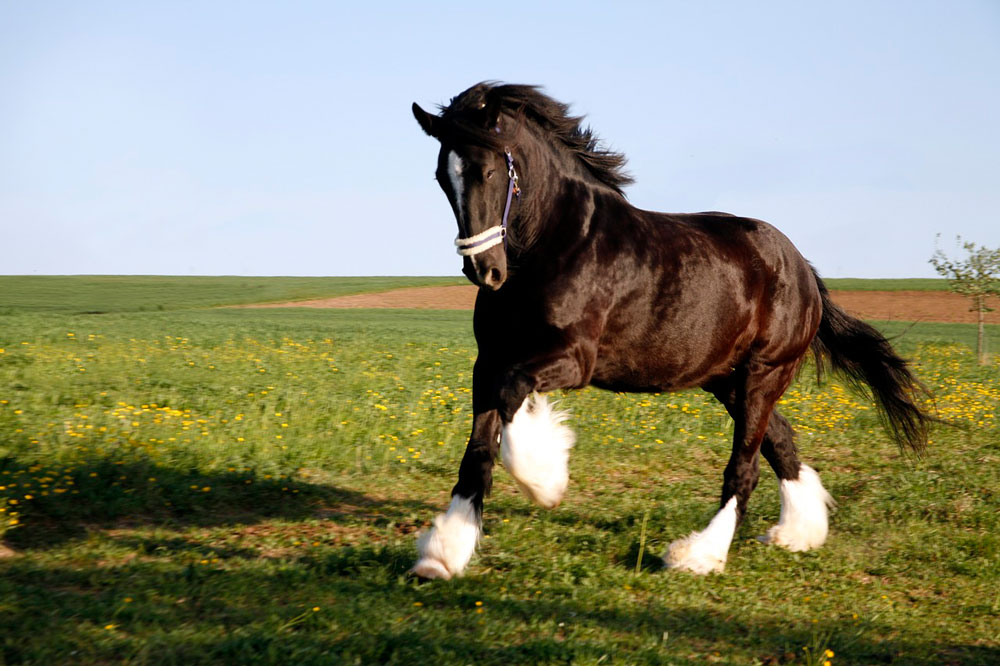 The Shire features a long and lean head with big eyes. The neck is long and arched. The shoulders are broad and deep. The chest is wide. The back is short but muscular. The hindquarters are long and broad.

There’s silky feathering on the lower legs. The hair is straight and fine. The hooves are massive. The entire body conformation expresses the absolute strength and beauty of the animal.

Despite their large size, such horses are calm and docile. This makes Shires great riding horses for beginners and pros. No matter what your level is, wear a protective riding helmet to stay safe.

When you get the Shire, get ready to spend hours on grooming. You’re likely to use a high stool to clip the horse’s body.

The Shire Horse lives for 20+ years. That’s an average lifespan for horses. Some horse breeds can live up to 30 years, like the American Paint Horse. 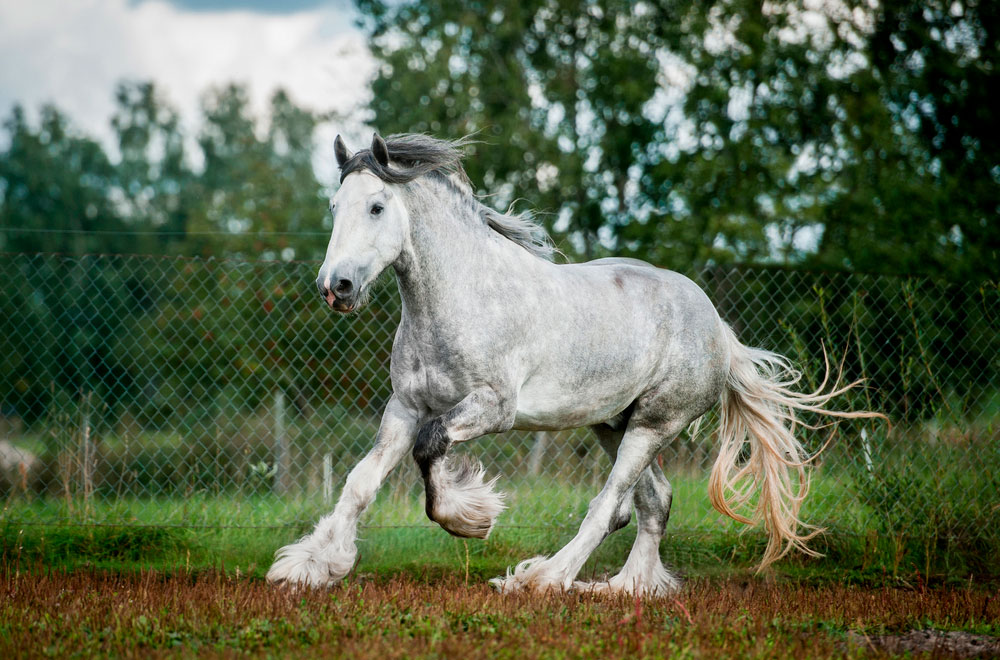 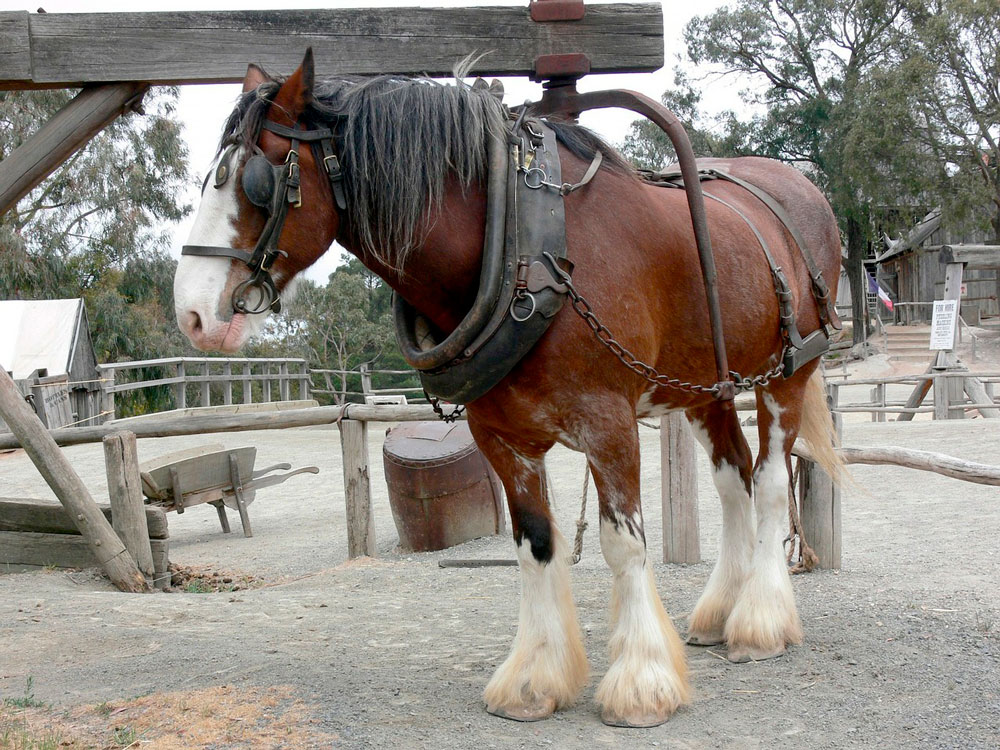 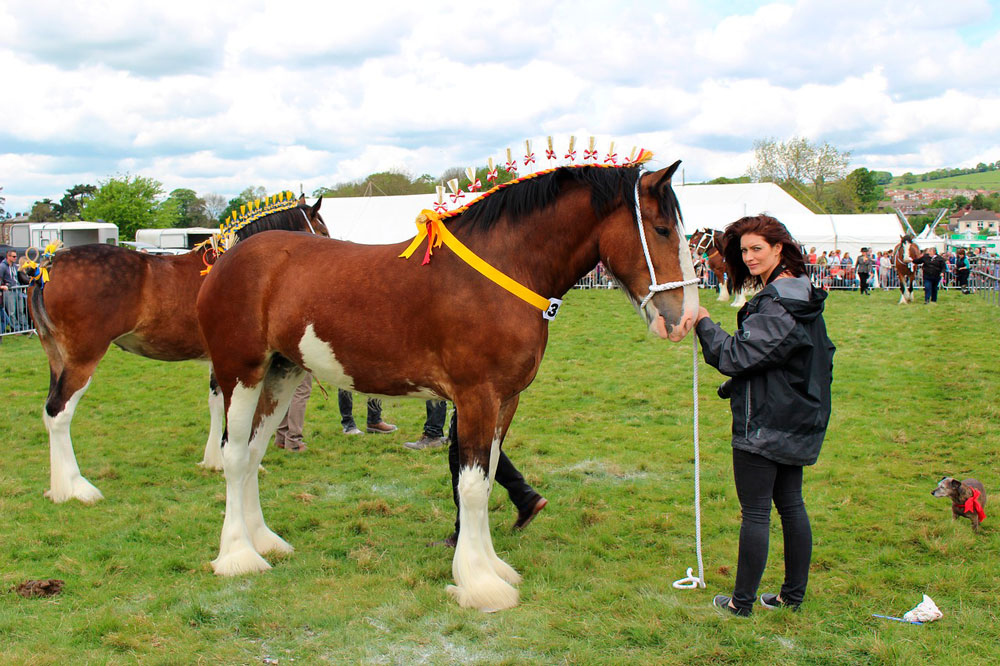 So, how much does a Shire Horse cost? The Shire Horse price goes from $5,000 to $20,000. Well-trained and experienced horses cost around $10,000. The price depends on many factors. They include the equine’s age, gender, color, health, and training level. Test the horse before purchasing it. 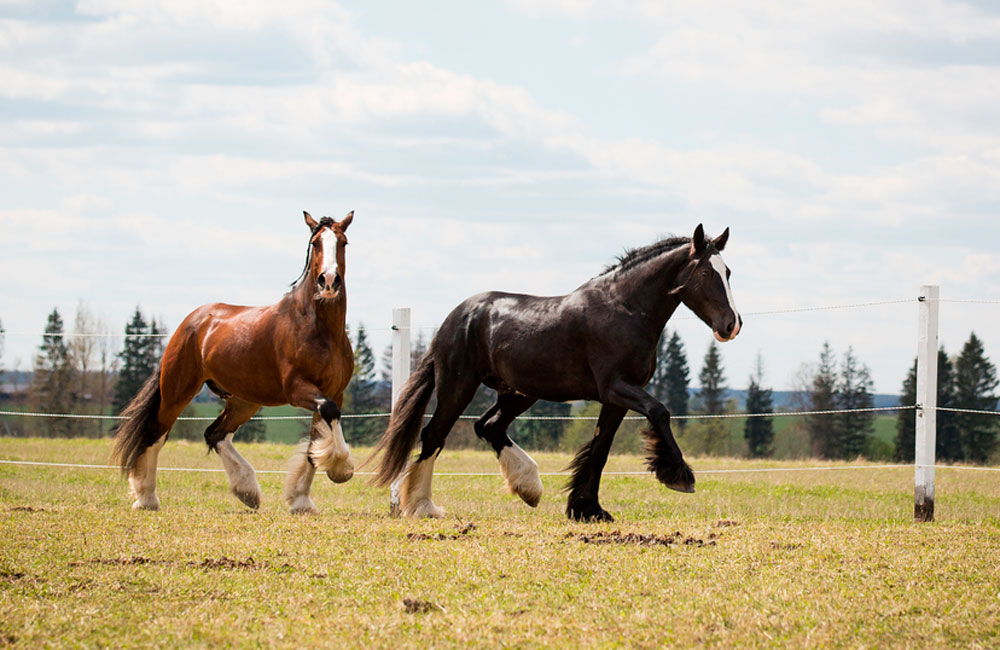 Shires are impressive equines. They are extremely strong and good-looking. Such a combo makes the breed useful in a variety of activities. The Shire is commonly used in farm work and trail riding.

The pedigree links the Shire with other horse breeds. They include the Friesian and the Clydesdale. History recorded a significant decline in the horse population. Not so many Shires are left to please the eye of the owner. The breed’s associations are looking for efficient ways to preserve beloved Shires.

David Garcia is a vivid writer and a big fan of equestrian sports. He founded Horsezz – the blog where David shares his knowledge and experience about horses, tack, equestrian riding equipment, taking care of horses, and other useful guidelines.
PrevPreviousBest Horseback Riding Helmet for Adults
NextRocky Mountain Horse Colors and TemperamentNext