The Morgan Horse is a well-known breed in the USA. It was one of America’s first horse breeds. Morgans have a solid breed history behind their back. This article reveals interesting facts about the Morgan Horse breed. Check it out to get if this horse is right for you.

What Is a Morgan Horse?

The Morgan Horse is one of the oldest horse breeds in the USA. Morgan Horses feature their compact and muscular body. The Morgan Horse height is 14.1 to 15.2 hands tall. The breed had an impact on a range of horse breeds. They include the Standardbred, American Quarter Horse, and Tennessee Walking Horse.

Morgans are highly versatile equines. They are used in a range of riding disciplines. These are dressage, show jumping, Western pleasure, and endurance riding. Besides, owners use the equine as a stock horse and a family pet.

The Morgan Horse is a state animal of Vermont and Massachusetts. The horse is also popular because of Marguerite Henry’s book named “Justin Morgan Had a Horse“. The plot was used in a Disney movie later. 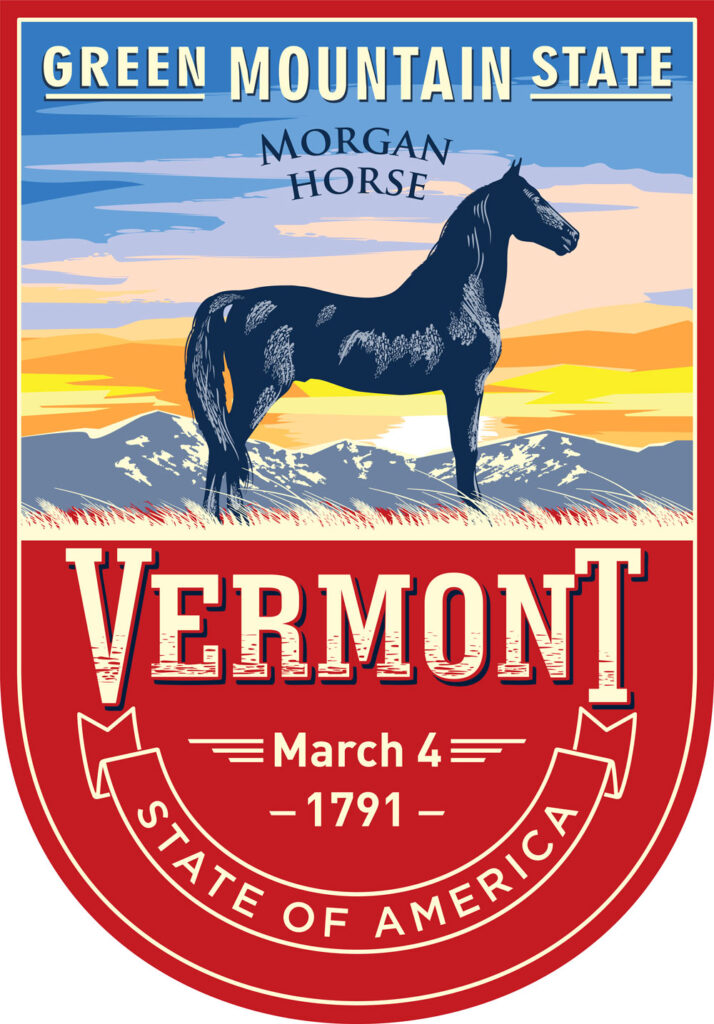 The Name of the Morgan Horse Breed

Why Morgan? All the breed’s representatives share their pedigree with a foundation sire. That was a stallion named Figure. The horse was foaled in Massachusetts in 1789. Justin Morgan, a U.S. school teacher and horse breeder, got Figure as a payback. People called that equine the Justin Morgan Horse. Since then, the breed was later renamed “the Morgan Horse”.

Figure was a well-known stallion. He was described as 14 hands tall and 1,000 pounds weight. The Morgan’s horse was loved by its distinctive look and athletic build. His own pedigree is still unclear. There’s a theory that Figure came from a Thoroughbred sire called Beautiful Bay. And the Thoroughbred horse is believed to come from the Turkoman Horse.

The Morgan’s horse died in 1821. Another horse kicked him and Figure died of his injuries. The equine left his heritage as he was used in horse breeding. Figure had six sons, perhaps, there were even more. Three of them (Woodbury, Bulrush, Sherman) became the foundation bloodstock of the Morgan Horse breed.

Woodbury was a notable breed figure in New England. He was 14.3 hands tall and of a chestnut color. Bulrush was well-known in harness racing for his speed and endurance. He was 14 hands tall and of a dark bay color. Sherman was the sire of Black Hawk. The last was a foundation stallion of the breeds including the American Saddlebred, Standardbred, and Tennessee Walking Horse. 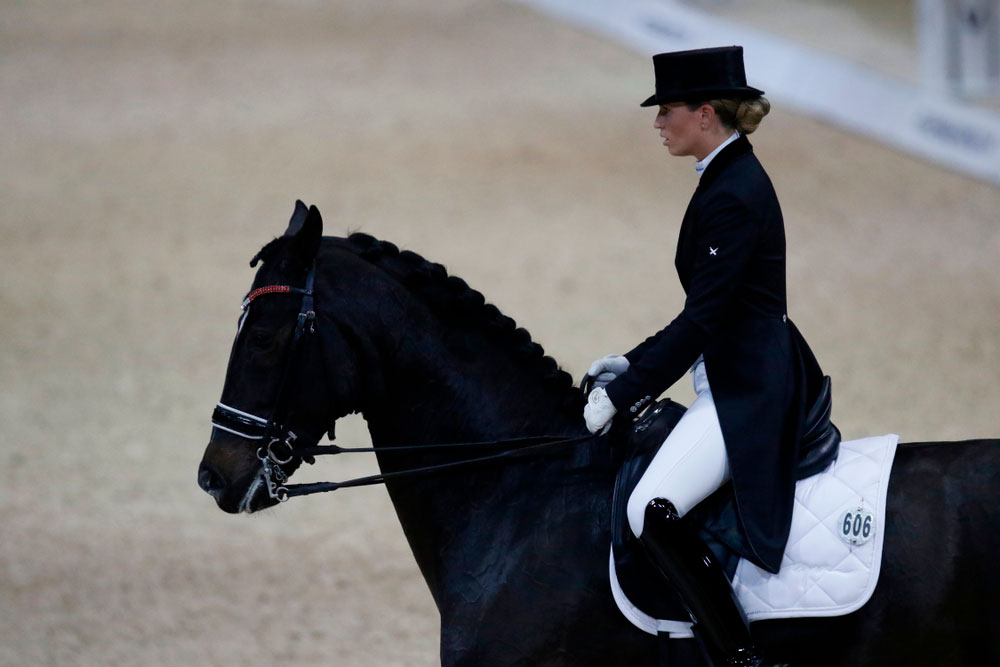 The Development of Morgan Horses

Since the 19th century, the Morgan Horse has been actively used in a range of disciplines. The breed’s distinctive features made the horse quite versatile in use. Morgans were actively used in harness racing where the rider sits on a cart behind the horse. Morgan Horses were also pulling coaches due to their endurance and great speed.

Owners used the Morgan breed as stock horses to work with livestock. And for other farm work as well. Morgan Horses were also used in riding disciplines and pleasure riding. During the American Civil War, Morgans served as harness and riding horses.

The Morgan Horse breed influenced several horse breeds. Shepherd F. Knapp was a trotting stallion brought to England in the 1860s. He took part in breeding the Hackney Horse breed. The Morgan Horse shares its pedigree with the Missouri Fox Trotter. Morgan Horses were crossbred with Texan Horse herds. This affected the development of the American Quarter Horse. However, breeding led to the disappearance of the original Morgan Horse. Some representatives are still left and kept isolated though. 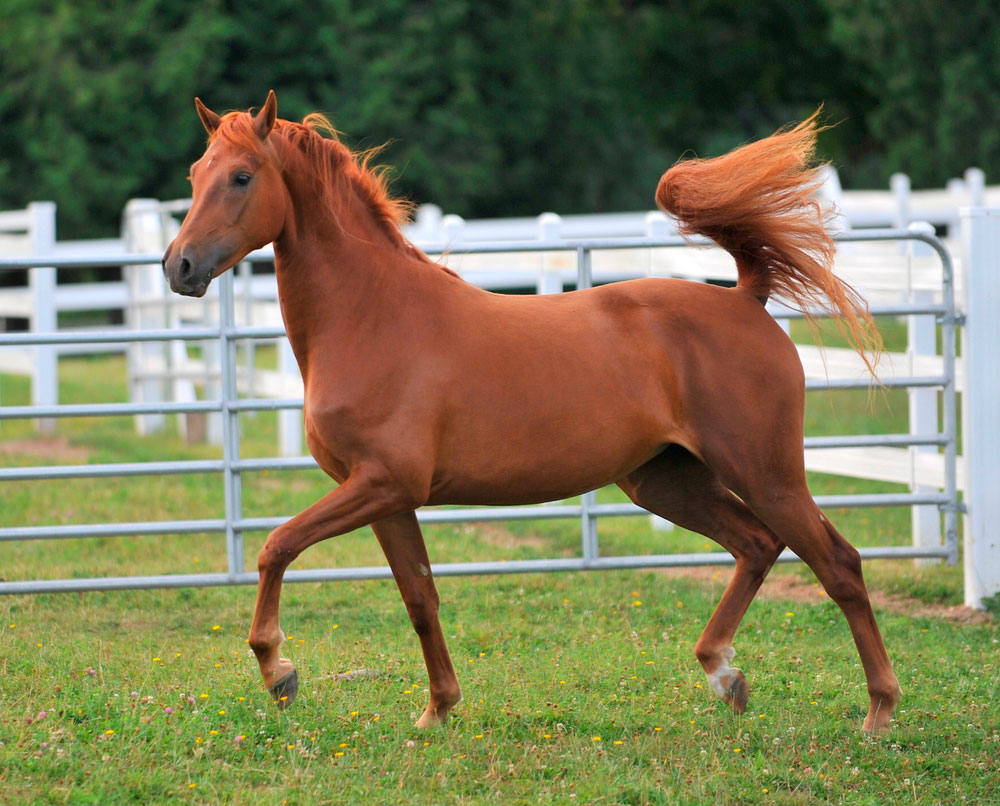 The Morgan Horse bloodlines are divided into four groups. These are Brunk, Government, Lippitt, and Working Western. 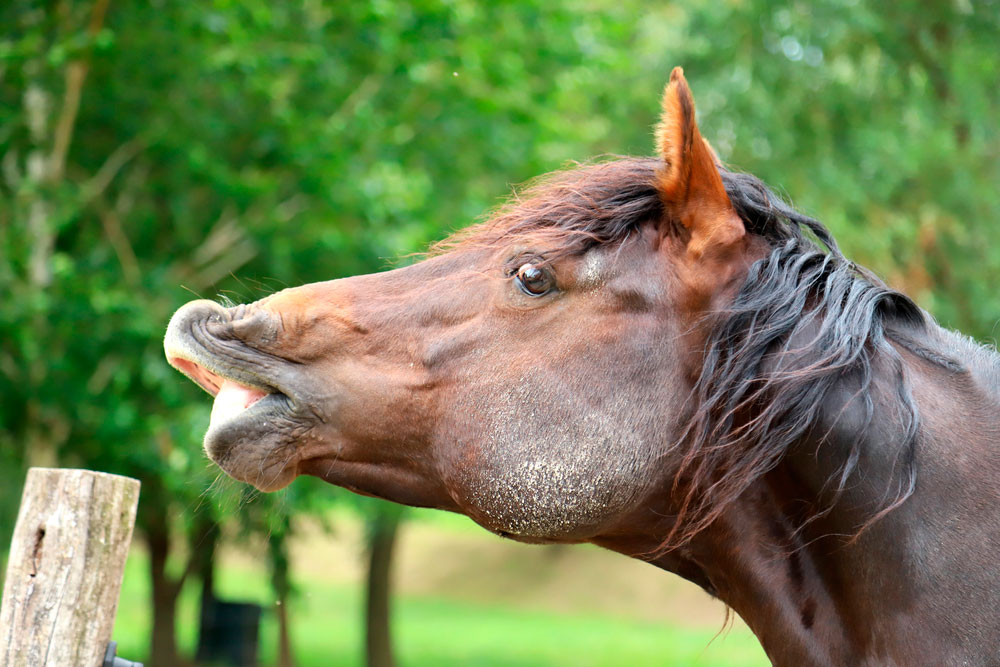 The Morgan Horse Club was formed in 1909 that was later renamed the American Morgan Horse Association (AMHA). In the beginning, there was an argument about whether to make the stud book open or closed. This affected the controversy in other US stud books.

Eventually, the stud book became closed in 1948. The registry showed that Morgan Horses are popular not only in the USA. Morgans are widely spread worldwide, particularly in Sweden and Great Britain.

The AMHA is the largest Morgan Horse association. Apart from it, the National Morgan Pony Registry was founded in 1996. It focuses on equines that are 14.2 hands tall or shorter.

There are other organizations that specialize in specific Morgan’s bloodlines. The Rainbow Morgan Horse Association focuses on Morgans with rare colors. For instance, those who have cream or silver dapple genes.

The Foundation Morgan Horse Association works with Morgans that resemble the original stocky type seen before breeding with the Saddlebred Horse.

The Lippitt Club and the Lippitt Morgan Breeders Association were formed in 1973 and 1995 respectively. As their names imply, these communities hold the registry of Morgans of the Lippitt Family. 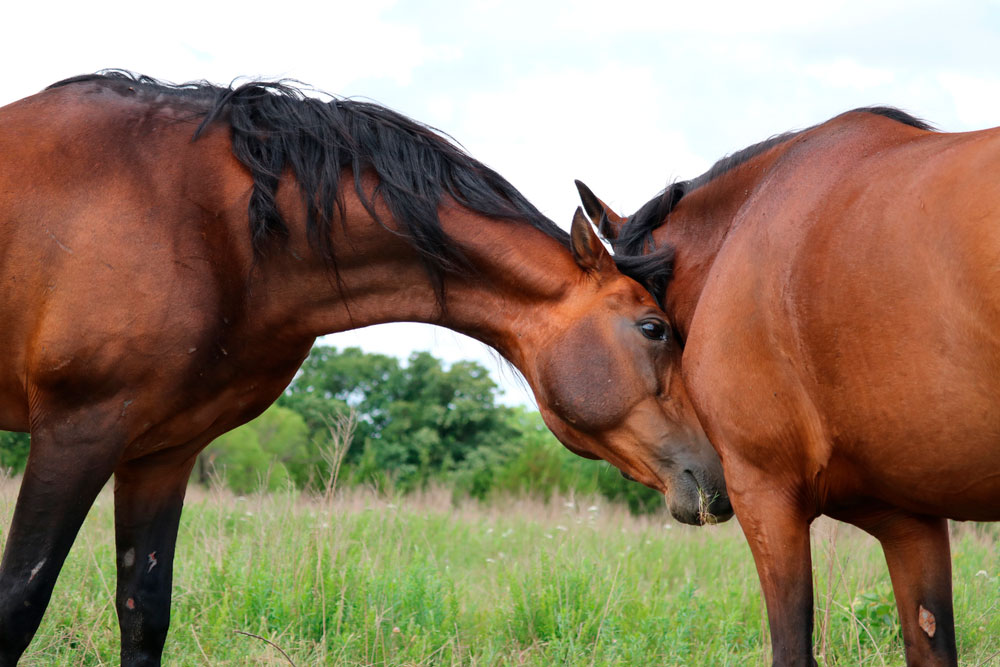 The Morgan Horse has a gentle temperament. It’s a highly intelligent horse breed. Morgans feature a friendly personality. That’s why they’re generally used for pleasure and therapeutic riding. The Morgan Horse breed tends to express its willingness to work.

Due to the excellent temperament of the Morgan breed, the horse is quite versatile. It’s generally used in riding and driving disciplines. Morgans are outstanding work horses.

If you’re looking for a horse for beginners, the Morgan is a great option. The breed is calm and placid. Morgans enjoy the company of their owners. They are eager to please people. The Morgan Horse is ideal for kids and adults. Just remember to wear a protective equestrian helmet and horse riding gloves when you mount a horse. 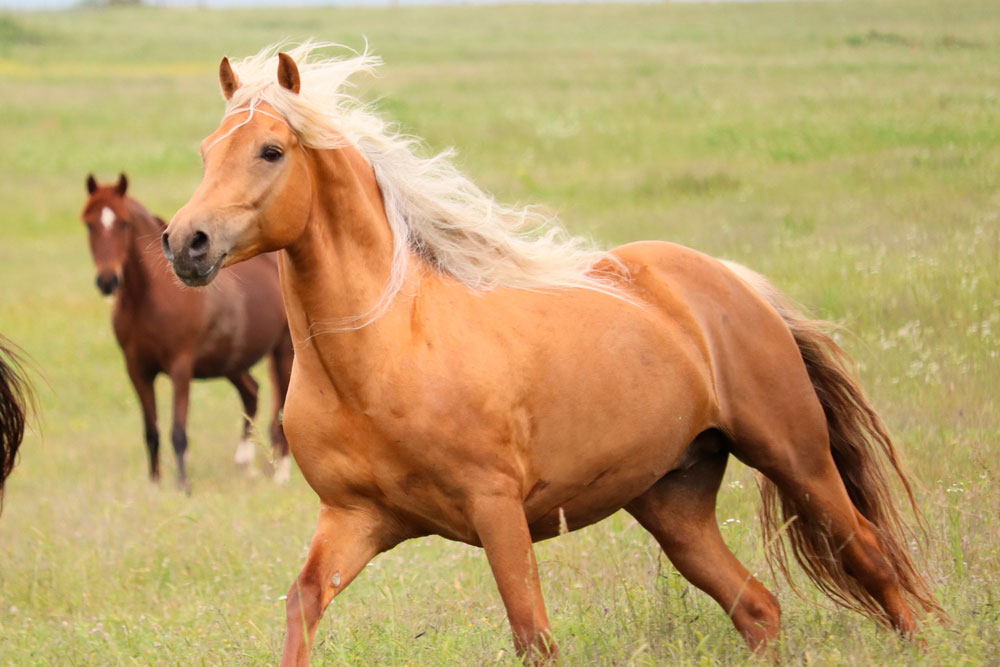 The Morgan Horse conformation is easily recognizable. It has a compact body with a short head and small alert ears. The broad forehead, large expressive eyes with a deep latch. The refined throatlatch ensures proper flexion at the poll. So the horse can breathe duly. The face is straight or slightly dished.

The neck is slightly curved. The shoulders are long and sloping. The back is short and muscled. The withers are well-defined. The flank is deep. The ribs are well-sprung. The croup is long and well-muscled. The tail is attached high, the hair is straight.

The body is strong and powerful. Straight legs are long and massive.

The Morgan Horse height is 14.1 to 15.2 hands tall on average. Some representative of the breed may be smaller or bigger though.

The Morgan Horse weight is 1,000 pounds on average. That’s a common weight for an average horse. Morgans are easy keepers. That means they can live in conditions with little forage. Feed your horse with enough hay and other food to keep it healthy. 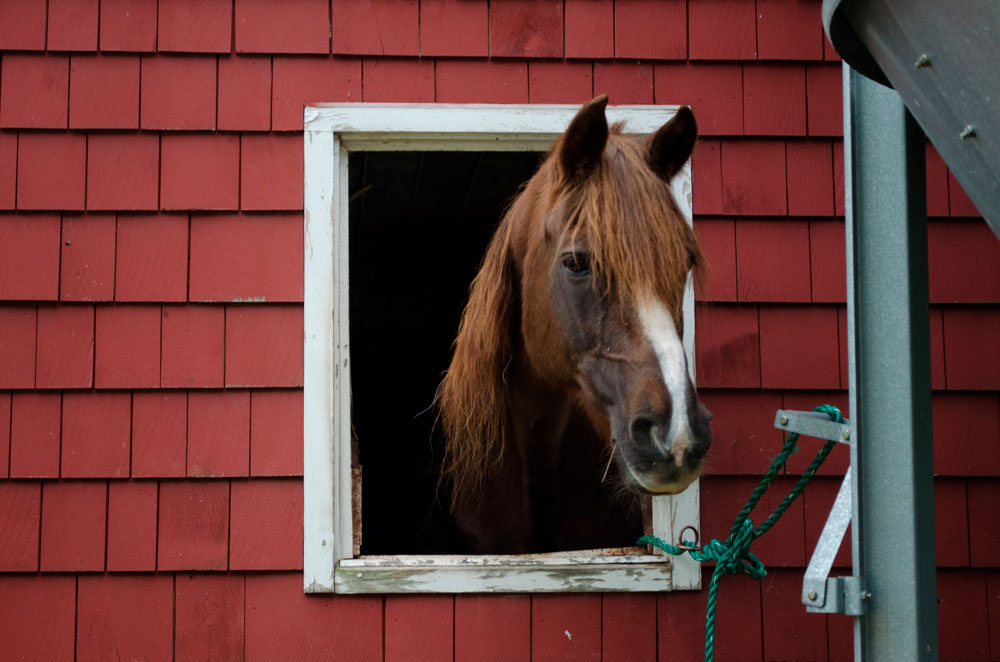 The life expectancy of the Morgan Horse breed is up to 30 years. Proper daily care of horses makes them live longer.

The common colors of Morgan Horses are bay, black, and chestnut. Other colors can be found too. These are grey, dun, roan, buckskin, silver dapple, and palomino. Some pinto white markings can be spotted on Morgans. These are frame overo, sabino, and splashed white.

Generally, Morgans are not gaited. However, there are some gaited Morgan Horses. They can perform the walk, the canter, and the trot. Plus at least one ambling gait. This can be a fox trot, pace, or rack. Gaited Morgans are at a high price. 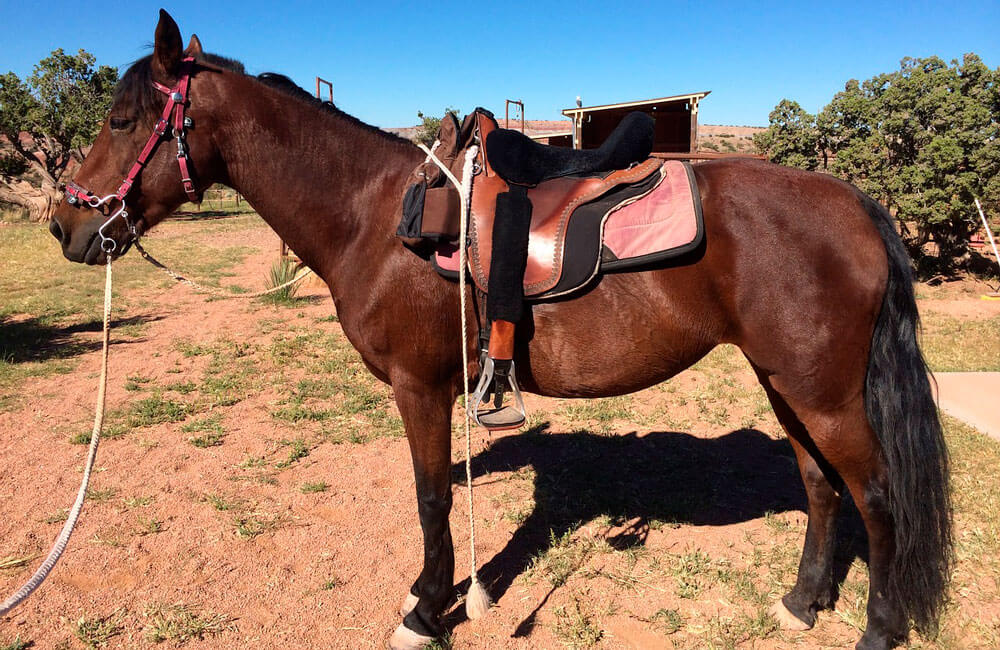 How Much Does a Morgan Horse Cost?

The Morgan Horse costs from $1,000 to $5,000. The average price is $3,000 for a young and healthy equine. A registered and well-trained Morgan could cost up to $10,000. The price depends on many factors. These are the horse’s age, gender, color, health, and training experience.

A Morgan is generally smaller than a Quater Horse. Sometimes, they can be taller in height. But the Morgan’s build is more compact. Modern Quater Horses have dominant Thoroughbred blood that makes them lean and tall. The Morgan Horse can be gaited while the Quater Horse can not. 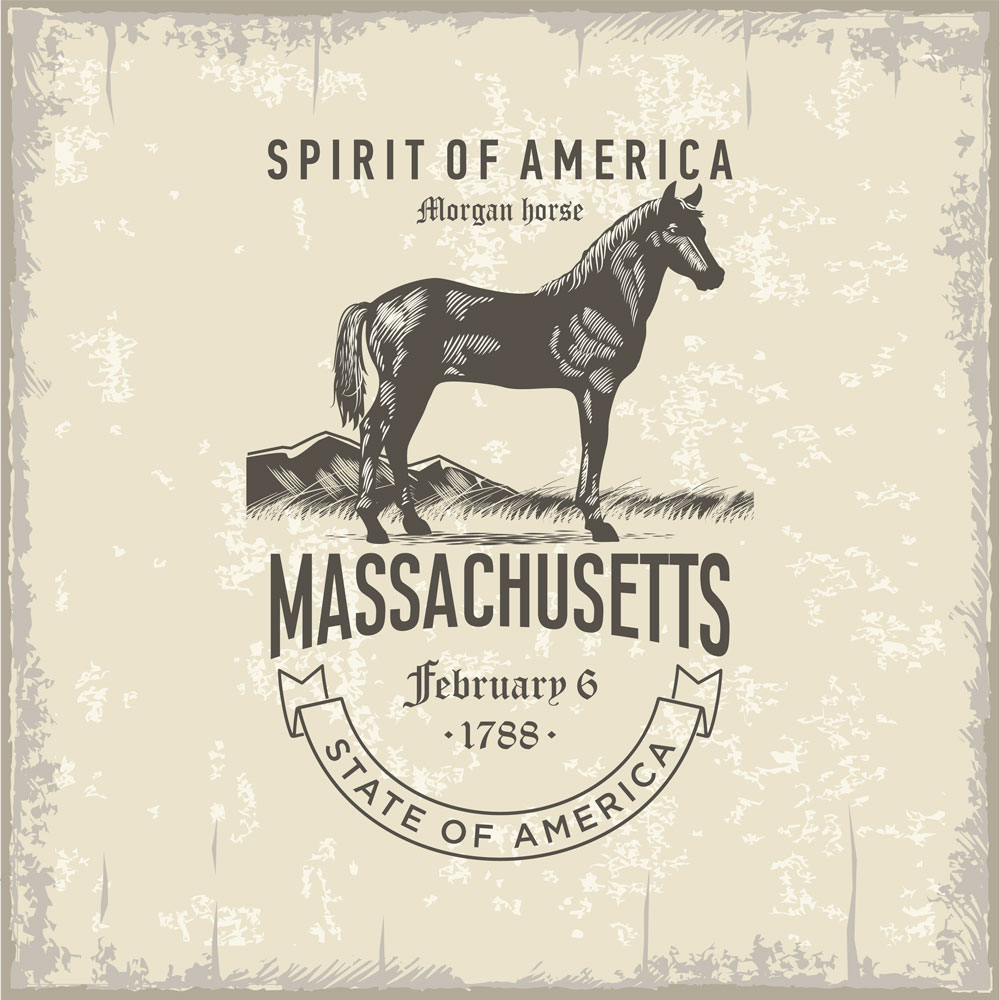 Morgan Horses as the Oldest Breed

Morgan Horses are loved for their graceful appearance and gentle temperament. The horse is eager to please its owner. You’ll definitely be chuffed to bits with such a companion. Besides, Morgans are easy keepers, which is a plus.

The Morgan is one of the oldest American horse breeds. It’s influenced other breeds thought its history. Morgan Horses stand out with superb characteristics. The horse is athletic and speedy. It’s commonly used in harness, dressage, showjumping, eventing, and pleasure riding. Morgans can be seen in driving competitions as well. Some representatives found themselves in movies. Thus, the breed is versatile.

The cost of a Morgan Horse ranges from $1,000 to $5,000. If you’re looking for a companion for working or trail riding, you’ll spend no more than $1,500. Certified and experienced horses will cost more. Plus, allocate your budget for daily care expenses.