Everybody knows that horses are very intelligent and graceful creatures. But there are also some surprising things that you might not know about them. That’s why we’d like to share a list of fascinating facts about horses that you may find unexpecting and astonishing.

1. Baby horses (foals) can stand and even trot just in a few hours after birth.

2. Horses used to be deemed as color-blinded but actually, they are not. Horses are able to distinguish some colors like blue and green but they don’t recognize red.

3. Comparing with other land mammals, horses have one of the biggest sizes of eyes. In addition, their vision is close to 360 degrees. Horses have a monocular vision which means that they can watch different spots with two eyes separately. But they also have a binocular vision so they look at the same object with two eyes.

4. As to sight issues, domestic horses tend to be near-sighted while wilds horses preferably are far-sighted.

5. Horses see in the dark much better than humans because of the part of the eye called tapetum lucidum. That’s why they can also see better in the twilight and poor-lighting conditions.

7. In the case of poor blood flow and health conditions, the horse’s hooves may come off. Typically horses don’t survive after that but if they do, they need their hoof capsule to be re-grown. The horse’s hoof can be re-grown for 12 months. The hooves are rich in protein, the same as humans’ which we can find in our hair and nails.

8. There’s a triangular part on the underneath of a hoof called the frog. It features a shock-absorbing function. In addition, when the legs meet the ground, it fosters the blood flow to pump it back to the legs.

9. There’s a specific tool called a hoof pick which is used to clean the hooves. It should be done on a daily basis to examine the horse’s health condition.

10. Another useful grooming tool is called a sweat scraper. As its name says, it helps to get rid of excessive water from the horse’s coat after showering.

11. Adult female horses have up to 36 teeth while male horses usually have 40 deciduous (permanent) teeth. In fact, we can find out the approximate age of a horse by examining his teeth. The full-mouth appears by the age of five.

12. Horses can chew only on one side at a time because of their way of eating. 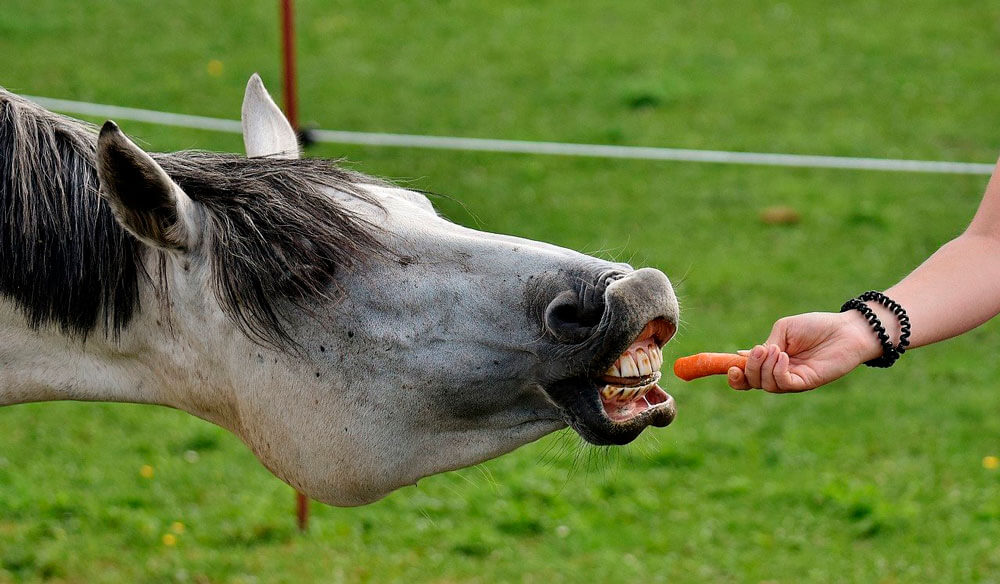 13. Horses can’t burp as they have a one-way digestive system. They also have quite strong muscles around their esophagus (the gullet) that their stomach would rather burst than vomit.

14. Horses’ brains are quite smaller than humans have. It goes 2.5 inches in size speaking of adult horses, but it depends on the age and breeds a lot. The horse’s brains weight approximately 1.37 lbs.

15. The average horse’s heart weighs about eight pounds. The heart grows until four years olds. The largest heart has ever been recorded weighed 12 pounds.

16. Horses have eight different blood types – A, C, D, K, P, Q, U, and T – while humans have only four. Moreover, it can be positive or negative and the blood types can be mixed up in different variations. So there’s a slight chance (1 in 400.000) of finding two horses with the same type. Horses have around 40 liters of blood in their body.

20. You can easily check if your horse is cold. Just touch the area behind his ears. If it’s cold, so is your horse.

21. There are 16 muscles in a horse’s so horses can easily rotate their ears up to 180 degrees.

22. Unlike many other animals, horses tend to sleep standing up. That’s been set because of natural instincts as horses have to be alert all the time in the wild. But they can actually lay down if they want to have a short nap. Also, horses can’t lay down for long as it might affect blood flaw badly making pressure on the organs. That’s why they can periodically switch their position when they sleep.

23. Horses tend to sleep in a group so they can watch each other and feel safe during their rest. That’s why it’s common when they sleep at different times so awake horses may keep an eye on sleeping ones. Horses sleep totally about three hours a day. But the rest is usually divided into several short sessions throughout 24 hours.

24. As horses are claimed as herd animals, they prefer to live in s group. So they can watch and take care of each other. If some horse passed away, the rest of the group can feel it and mourn. 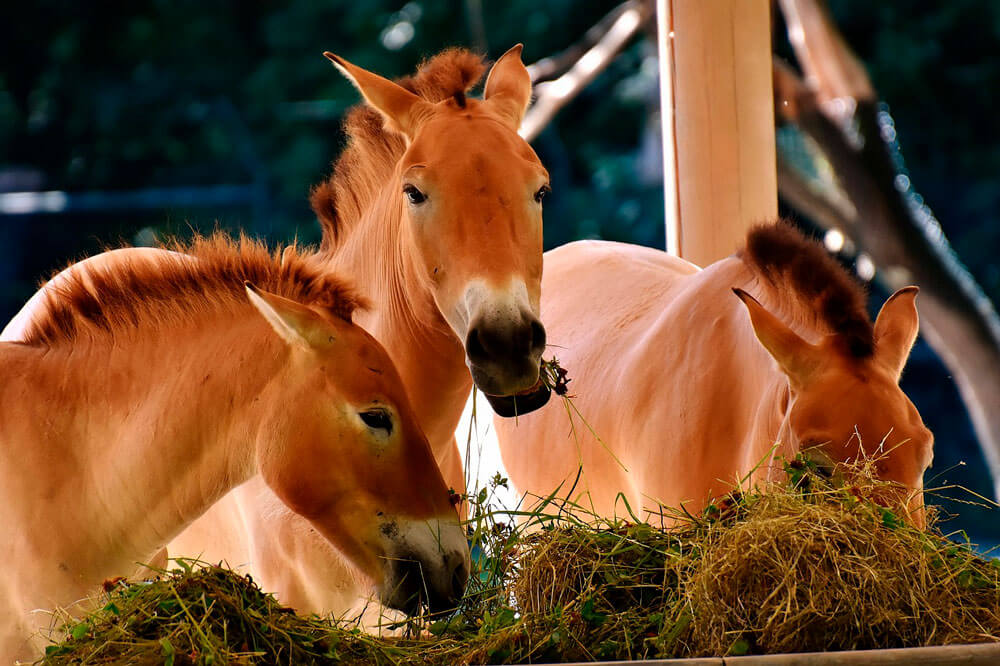 25. Horses can eat pasture grass, hay, grains, and some fruits like apples, pears, apricots, peaches, bananas, etc. As well as veggies such as carrots, celery, and snow peas. But don’t feed a horse with tomatoes, bread, cabbage, broccoli, potatoes, meat, and compost.

26. The average horse can drink up to 10 gallons of water a day. Horses can live without water for up to six days. They can also survive with no food but water for almost a month.

28. About 350 horse breeds have been registered all over the world as well as 100 pony breeds. All of them are grazers. The Arabian horse is claimed as the oldest horse breed. It’s been here for thousands of years.

29. There are almost 60 million horses in the world.

30. Horses can be sometimes bred with other species as well. For instance, Zebroid is a mix of a horse and a zebra. Zebras are also bred with donkeys and their mix is called Zonkeys.

31. The nearest relative to a horse is a rhino.

32. Horses can live up to 40 years and sometimes even longer. But the average age is 28 years. The oldest horse that has ever been registered was called Old Billy from Lancashire, the UK. According to the Guinness World Records, Old Billy was the Shire horse who was born in 1760 and lived for 62 years.

33. In 2003 there was the first announcement of a cloned horse named Prometea. The researches have been taken to improve the horse breeds and “make a copy” of the best equine champions.

34. There’s a specific measurement system for horses. They are typically measured not in inches or centimeters but in hands (1 hand = 4 inches). 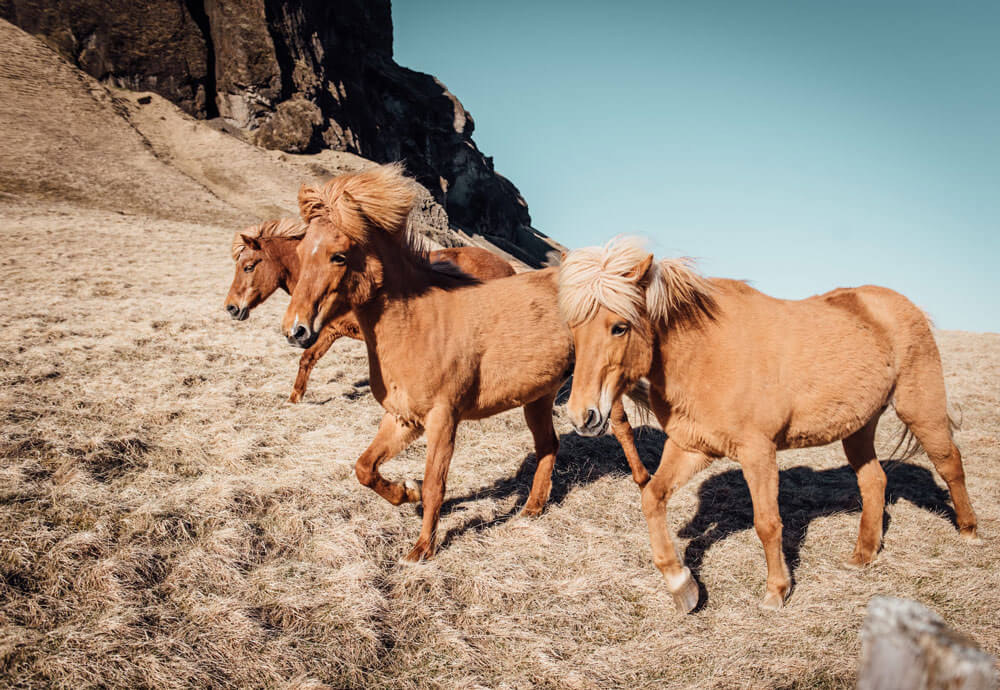 37. The average speed of a horse is 30 mph but it may vary immensely. Thoroughbreds are grasped as the fastest horse breed in the world. A horse named Winning Brew was registered as the fastest racing horse whose top speed was 43.97 mph.

40. The “native” North American horses died out about 12.000 years ago. Even current wild horses are not claimed as having local ancestors. “Modern” horses came from European regions and have been spread widely.

41. Horses can be found on any continent excluding Antarctica.

42. Thoroughbred horses are the most expensive breed. The horse named Fusaichi Pegasus is claimed as the most pricey horse that was sold for 70 million dollars in 2000.

43. The American Quarter Horse is the most popular breed.

44. The process of graying a horse is characterized by turning white over time. So horses can be born with different colors such as chestnut and bay but end up being white. But they are not actually white, they’re called gray horses.

45. First ancestor horses called “a dawn horse” were far way shorter than current descendants. They were about four-five hands high.

46. There’s a study called Hippophagy which is deemed as a practice of eating horse meat.

47. Understanding horse body language is essential if you want to bond with your companion. So you should understand their expressions. For instance, if a horse is frightened, he throws up his head and shows his teeth. It could happen because of rapid movements or loud noise.

48. If a horse pins his ears back showing his teeth while his nostrils are flared, step back from the horse as he’s threatening you. 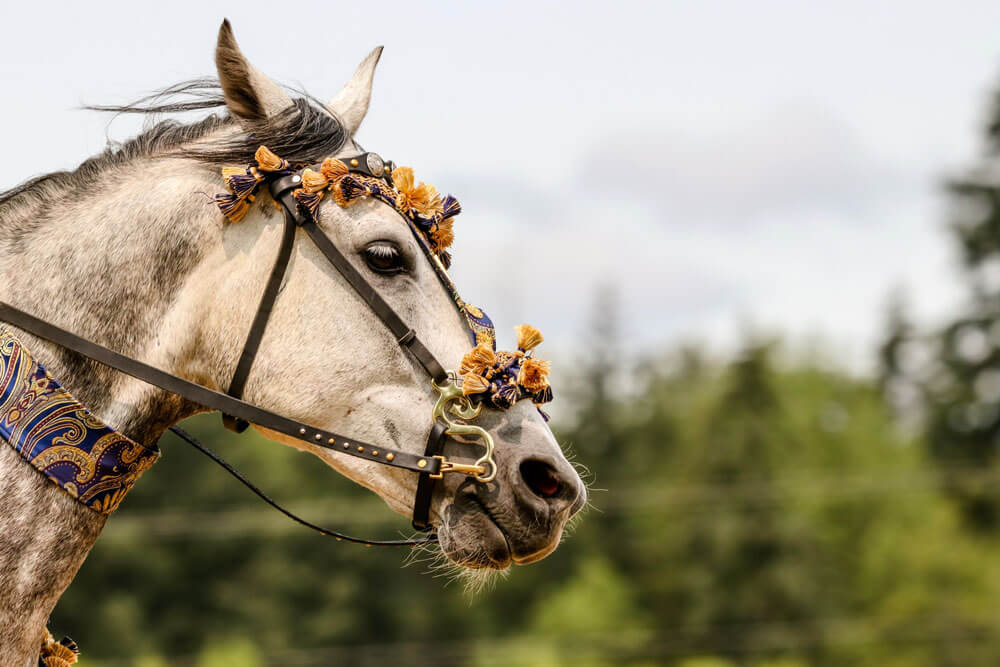 49. Horse’s alert is determined by his ears pointed, eyes wide, and the head raised up.

50. When a horse lifts her upper lift and bares his teeth, it may seem as he’s laughing. But in fact, it’s not true. Actually horses use a technique called “Flehmen” when they sniff a new smell to enhance the sense. But no doubt, pictures showing their “smile” look hilarious!

51. Horses may have five natural gates – the walk, the trot, the canter, the gallop, the back. In addition, there are various artificial gaits that horses can be trained.

52. The “horse box”, a transport which is used to transfer horses, was invented in 1836 by Lord George Bentinck from the UK. As he needed more space to move his horse to different races, he made up a craft-built carriage pulled by six horses.

53. From 1867 to 1920 there were recorded a rapid increase in horse’s population. It’s believed that the reason lies in the car industry launching.

54. Horses can make different noises to express their feelings. When a horse sighs deeply, that means he’s relaxed. This can be heard while grooming or doing massage. Otherwise, a horse sighs when he’s bored.

55. If a horse groans that could mean he’s in pain. In this case, it’s better to go to the vet immediately. Especially if apart from groaning, the ears are pinning and the eyes are wide.
Nickering may be a good sign of great well-being. If a horse is glad to see you or his favorite food is coming, he usually nickers. The sound is not loud though, as while a horse is making a sound, his lips are closed.

56. When a horse breathes quick enough and his nostrils are flared, he is excited and anticipation of something. If his head and tail are lifted, be careful, as he might make sudden moves.

57. Neighing may be a sign of being anxious. You should pay attention to such behavior and try to get rid of the factor that makes him nervous. On the other hand, a horse can neigh when he feels quite confident with alert ears and a bit lifted tail.

59. The longest mane was noticed in the 19th century on a horse named Prince Imperial who had a mane of 14 feet 3 inches long. Probably the horse was the first Percheron horse breed distributed to the USA.

60. Though they’re not real, unicorns are claimed to be a national symbol of Scotland. These animals are associated with power and strength. Moreover, unicorns are sworn enemies of lions, while the last ones are a symbol of England. There’s also a National Unicorns Day which takes place on the 9th of April.

David Garcia is a vivid writer and a big fan of equestrian sports. He founded Horsezz – the blog where David shares his knowledge and experience about horses, tack, equestrian riding equipment, taking care of horses, and other useful guidelines.
PrevPreviousThe Largest Horse Breeds in the World
Next12 Most Popular Horse ColorsNext