Horses are mammals, and like other mammals, they carry a fetus in a belly and then give birth to a baby horse (called foal). Horse pregnancy is a complicated process that is divided into several stages. If this is the first time your horse is pregnant, you may be wondering how to treat them properly. Thus, here’s an ultimate guideline about horse pregnancy signs and its timeline.

How Long Does a Horse Stay Pregnant?

In fact, the horse gestation period runs from conceiving to baby arriving. The entire horse pregnancy cycle takes 340 days on average (11 months). The range may differ slightly from 330 to 370 days. But 340 days is deemed as the most common due date before giving birth.

If the horse gestation period exceeds 370 days, it’s unconventional but not problematic. The longest horse pregnancy period recorded was 445 days! On the contrary, foals being born on the 300th day or earlier are unlikely to survive because of the organs not being developed enough.

Speaking of ponies, a miniature horse also needs about 330 days to carry and give birth to a foal. The due date may range from 320 to 380 days before the baby arrives.

What is the Best Time to Breed a Horse?

Naturally, horses are seasonal breeders, which means their reproductivity is different during the year with season switching. Mares’ estrous cycles are correlated to the length of the daylight. Thus, the highest activity is visible during long days in late spring and summer. This affects her behavior while showing the mare is in heat by being receptive to the stallion.

As mares’ breeding period is in summer, the foaling starts in spring or early summer the following year. This is a perfect time, as when the baby arrives, the weather is mild and there’s no lack of food.

However, breeders can make some manipulations to knock off the due day in order to have an early foal. Such practice is common in horse breeding for shows or sale. The main idea of accelerating the baby arriving is to artificially prolong the daylight to 14-16 hours a day. You should start the regimen in December in order to get a foal in early winter the following year.

It’s crucial to do tests on an ongoing basis to check the mare’s health condition and regular cycling. Besides, keep in mind that such a method doesn’t guarantee your horse’s early foaling. Lots of aspects should be taken into account like the mare’s well-being and age.

How to Tell If a Horse is Pregnant?

There are several horse pregnancy signs you may face when your horse is expectant. Here are the most common ones:

In addition, there’s a chance your horse may not show any visible sign of being in heat. So you can think the horse gestation period begins. However, this is not the point, your mare is merely “silent heat” (covert mares). That means that the mare with a normal cyclic activity doesn’t exhibit usual signs of being in estrus. Thus, a veterinarian examination or an ultrasound is needed in order to determine the mare’s heat.

Apart from horse pregnancy signs, there are several ways of gestation testing to make sure your horse is conceived or not. These are rectal examination, ultrasound, and blood and urine tests. Such options are more accurate, as mares may not show any visible signs of being in foal.

When your mare’s conceiving is confirmed, it’s time to check the horse’s carrying at all phases. Generally, pregnant mares stages include three periods:

Here’s a detailed horse gestation timeline that is divided into three trimesters. 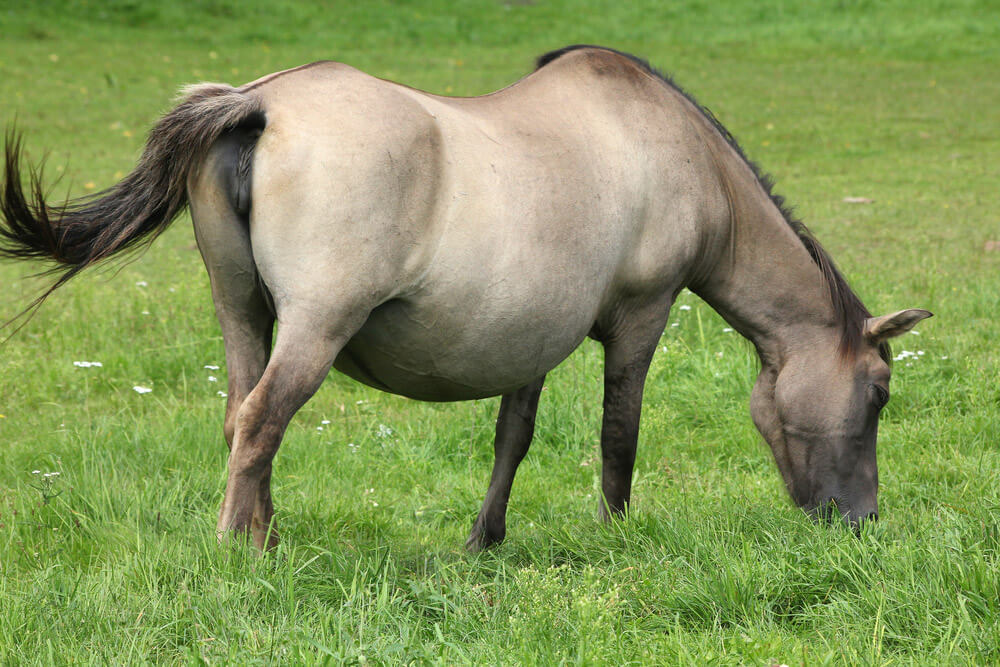 How to Take Care of a Pregnant Mare

In order to provide a flawless mare gestation period as well as foaling, visit a vet regularly and check the horse’s health. Apart from usual prescriptions, you may need extra supplements and appropriate nutrition.

How to make your horse feel better throughout the horse pregnancy stages? Here are some tips that may come in handy.

At an early stage of being conceived, it’s believed that riding a pregnant mare is beneficial. However, this is relatable to healthy horses only with no high-risk of abortion. So you can saddle up your companion with no worries and enjoy the ride. You can perform the gaits or even jump during the first eight months after breeding.

Riding after eight months is possible but you should reduce the workload. Trail riding is more acceptable in this case. As the fetus is getting bigger and it starts grabbing more place. It is becoming harder to carry the baby, so ride your horse carefully not to harm her.

Additionally, don’t make the mare rest at one place all the time during the horse gestation period. When she can’t bear the rider anymore, let her walk from time to time to stretch a bit and get fresh air. Keep in mind that constant standing at the paddock may lead to the legs swelling, which is inappropriate.

How Long Can You Ride a Pregnant Mare?

As we already mentioned, don’t isolate the mare in the barn keeping her immovable. Apart from stiff muscles, you separate her from other horses, which is not recommended. As a horse is deemed as a herd animal, communication with mates is a vital part of their social lives.

In fact, an expecting horse tends to become less active two weeks before delivery. She usually rests more frequently, hence, she keeps the distance from the herd and splits up. The mare needs more privacy and peace to get ready for foaling.

A mare during gestation is more vulnerable to get sick. And this may result in abortion. That’s why it’s better to visit the vet who can recommend proper vitamins and vaccines. They could enhance the immune system of the mare and her fetus in order to get through the pregnancy with no complications.

Apart from vaccination, deworming is essential as well. Discuss the schedule with your veterinarian in advance. Deworming shouldn’t be done one month before foaling.

Additionally, keep the horses that are taking part in competitions away from the mare, as they are at a high risk of spreading illness. If you use the same grooming tools for different horses, disinfect them on a regular basis. The same goes for the barn cleaning: keep it neat and washed.

An expecting mare is eating for two, thus balanced nutrition is at the top of the agenda. In fact, the foal requires a lot of protein and minerals in order to grow up duly. That’s why you need to think over feeding your horse to provide a healthy gestation period.

The research shows that a pregnant mare needs calories 28% higher than regularly. Besides, raise protein to 42% and calcium to 80%. Increase the amount of food gradually to avoid overeating. You can consider investing in high-protein supplements to reach the desired nutrition.

In terms of feeding, keep a grass hay diet and avoid grain. In fact, vegetable oil may be added to the meals. Don’t forget about fresh water and a salt block. Contact your veterinarian in order to plan the proper nutrition for your pregnant mare beforehand.

The Process of Foaling

The horse parturition includes three stages: proper positioning of the foal, the foaling itself, and placenta eliminating. If you’re going to take part in the foal delivery, it’s crucial to determine these phases and know what to expect.

The stage starts with the foal moving and changing its position to get through the birth canal. The fetus extends his neck and forelimbs for a better position. Meanwhile, the mare can help her foal by getting up and down throughout the process. She is likely to behave nervously, kicking at the tummy.

The last step is when the allantoic fluid appears that lubricates the birth canal. The process of foaling usually takes from 1 to 4 hours.

The phase of giving birth starts with strong contractions of the uterine muscles. The mare begins expulsion. She may change her position in order to hold her foal to come out. If the mare is about to birth in a standing position, it’s better to stand nearby and catch the foal to avoid injuries when he falls down.

At the same time, the foal’s forelimbs show up, while one of the legs is positioned a bit forefront than the other one. Such a pose makes the foal passing by easier. Soon after the mare pushes again and the rest of the baby’s body is coming out.

In fact, with a foal delivery, the amnionic fetal membrane breaks down to free movements and make it able to breathe. If you find out it’s still not broken, get closer and tear the membrane right away.

After the hind legs pass through the birth canal, the mare can take a rest once again. It may take up to an hour when she stands up again and the umbilical cord tears up. While she is resting, the blood transfers from the placenta to the foal through the cord. Watch the foal gets the necessary blood until the cord is broken.

The last phase of foaling is getting rid of the placenta. This can be done right after the delivery, however, the entire process can last up to several hours. The contractions are still occurring in order to make the placenta come out of the mare. After a while, the uterus gets back to its normal size.

Keep in mind that you must not pull the placenta from the mare’s channel as this may lead to uterine infections. But you should check the placenta for its texture. If it’s too thick or has haemorrhagic areas, it may be a sign of the placental infection. If you’re not sure about the placenta’s condition, take a sample and show it to your vet.

As you can see, the horse gestation period requires lots of aspects to be considered. As the due date takes almost a year, you should constantly take care of a pregnant mare and do some tests.

In fact, horse pregnancy stages are divided into three trimesters while the fetus is growing up and developing. Check the horse pregnancy timeline to be aware of the major changes before delivery. Besides, a mare gestation calculator may come in handy to get the birth date.

Treat your horse well, visit your vet in time, watch her foaling and you will get a healthy baby horse with no worries.