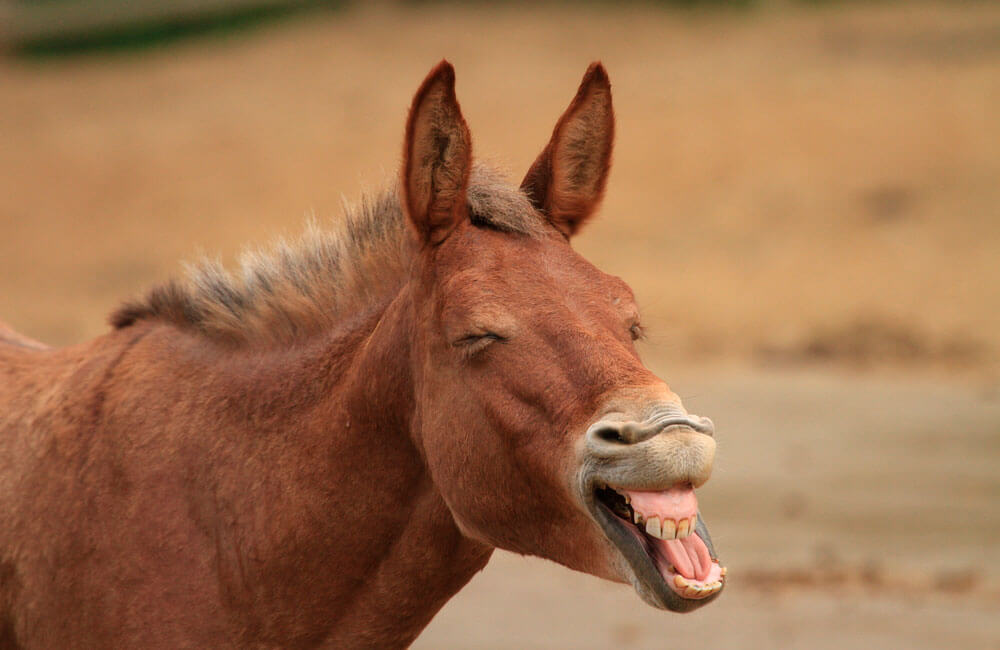 Apart from hinnies, there’s even more common inter-breed – a mule. Is there any difference between a mule and a hinny? Let’s figure it out.

Crossbreeding is believed to create a creature with improved characteristics inherited from its parents. This can be done to breed an animal for specific purposes like working or showing. Different breeds are crossed in order to get a foal that got the best features from both bloodlines.

What does a hinny inherit from its parents? Donkeys are claimed to be sturdy animals that can adapt to arid living conditions. They have enhanced hearing that allows them to catch long-distance sounds with no issues. And in hot weather, the ears take part in cooling down the body temperature. All of these exhibit great stamina and surviving features.

From the side of a horse, a hinny inherits its boldness and strength. They are suitable for a variety of work and events. Thus, a hinny is prone to be extremely intelligent, strong, tough, and steady. Such an animal could come in handy with these top-notch features. Hinnies can be used at farms, shows, races, or as a fave pet for kids.

A hinny is a result of crossbreeding between a stallion and a jenny. The animal is not as big as horses due to a donkey mare having a smaller womb. A hinny has a donkey-like body and the limbs are horse-like. Their head, mane, and tail are also more horse-like. A male hinny is called a horse hinny, and a female hinny is a mare hinny.

A horse has 64 chromosomes, whereas a donkey has 62. As a result, a hinny has 63 chromosomes that affect the reproductive system. The animal is sterile, which means it can’t reproduce an offspring. A male hinny is typically castrated to cut off its eagerness to mate.

Apart from a hinny, there’s another breed resulting from a cross between a horse and a donkey. This animal is even more popular – a mule. Some people may think that a mule and a hinny is the same creature. But is it so?

Hinny vs Mule – What’s the Difference?

There’s a difference between these animals indeed. Professional breeders can name a range of distinctive features of each of the pets. They are the following.

First of all, mules are bred from a male donkey (stallion) and a female horse (mare). That is vice versa to the hinny – its parents are a male horse and a female donkey. Mules commonly resemble both parents, while hinnies look more like their mothers – donkeys, and rarely like their fathers. Besides, hinnies have a wider range of appearance than mules.

A mule has longer ears. The main and tail are shorter, thinner, and grow upright. But the mule’s tail is longer and thicker than the donkey’s tail. The limbs are straight – like donkeys have, the hooves are smaller but tough.

Hinnies can be different in stature, and mules – in an array of sizes. Thus, a mule can be as tall as a horse, especially if its father belongs to the workhorse breed.

Another feature of breeding mules is that they have hybrid vigor. Hybrid vigor (heterosis) is a result of improving the characteristics of an offspring after crossbreeding. For instance, mules have a greater life expectancy than horses. They can withstand more workload as they are rather sturdy and tough.

Mules aren’t prone to have lameness, they are sick not very often. Such pets are better if living in extreme temperature conditions. Mules have good stamina, they are able to survive poor feeding. On the contrary, hinnies don’t possess such hybrid vigor. They have smaller bodies, they are weaker, and not so hardy. But still, such animals are little but mighty.

In terms of temperament, hinnies are rather calm, compliant, soft, and tender. They are tolerant and loyal to their owners. They are not as energetic as mules are. Mules are smart, they are claimed to be smarter than horses. They are quick-witted, thus, mules are good for training. At the same time, mules are deemed as curious, bold, willing to adventure creatures. Their temperament is close to the horse’s, while hinnies inherit a donkey’s one.

Speaking of similarities, both hinnies and mules are more resistant to a range of diseases. Besides, their lifespan is longer than their parents tend to have. Both hybrids are quite intelligent and sturdy, they are strong to work for long, and their hooves are sturdy enough.

The Final Word About Hinnies

A hinny is an offspring of a horse and a donkey. It inherits various features from both parents to be “a better version” – more strong, sturdy, and brave. The animal is characterized by its small body, long tail, and strong hooves. Hinnies are calm and friendly, they are easy to learn. Such a creature is an outstanding companion at the farm or shows. Besides, it could be a wonderful friend for children too.

In the battle mule vs hinny, the winner is unclear. Both animals have excellent distinctive features that make them great companions. But keep in mind that they are bred in different ways and inherit various characteristics.

If you’re going to keep a hinny for riding, don’t forget about a riding helmet to protect your head.