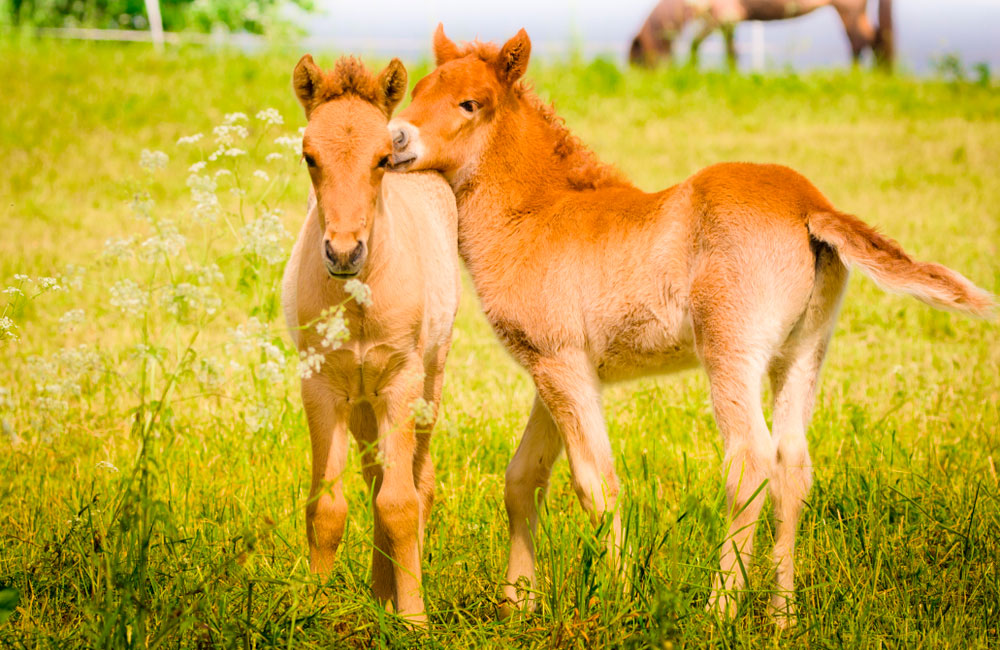 As a horse grows up, its aging stages have their own names. And these names are different for male and female horses. Distinguishing a horse’s age can be challenging. This article is written to describe young horses and their age stages.

What Is a Foal Horse?

A foal is a term applied to all young male and female horses. The process of giving birth to a foal horse is called foaling. No matter if it’s a male or female, a newborn baby horse is a foal. This term is accurate to a baby boy and a girl horse under the age of 12 months.

A foal can stand up a few hours after birth. The baby sucks milk from its mother’s teats by standing near the mare. They start to eat solid food after ten days after foaling. After a few days, a foal learns to gallop. Baby horses nurse the mother’s milk until the age of one year.

A foal is a horse until 12 months old. Then the horse is called a yearling. This term is used at one to two years of age.

What Color Will My Foal Be?

You may predict the color of the foal if you know basic colors and patterns. For the most basic colors (black, bay, chestnut, palomino, sorrel), use a horse color cross chart. The chart is shown below.

As for crossing a roan, distinguish its base color. Omit the white hairs on the coat and check which color is dominant there? A bay roan is a bay and a blue roan is black. Use the color cross chart to guess the color of your foal.

When crossing a grey horse, they carry a dominant gene. It supersedes the rest of the coat colors. That’s why a young horse can be born with one color, let’s say bay. And when they get older, they turn to grey horses. To guess which color the foal will be, you have to know the base colors of its parents. Then use the horse color cross chart. Mind there’s also a chance of arriving a grey foal.

As for the dun color, the rules are similar to roan foals. The base color of a classic dun is bay, a red dun is chestnut/sorrel, a grullo is black. When you find out the base color, use the color cross chart.

When to Wean a Foal?

Weaning a foal is done after four months of age. It means to separate a mama and baby. At the age of four to seven months old, foals are ready for grain and forage. Before you wean a foal, make sure the baby is healthy and eats enough hay. Provide enough nutrients to the diet for skeletal and muscle growth.

There are two types of weaning a foal. The first one is gradual, another one is rapid. Gradual weaning is done by providing a safety fence between a mother and baby. The fence is introduced gradually during short periods of time every day. While rapid weaning makes separation a one-time process. It’s up to you which method to use. Make sure it minimizes the stress in mares and foals.

What Is a Colt Horse?

Not all foals are colts. A colt is a young male horse. It’s a small horse that’s called a colt till it’s an adult animal (four years old). Colts go through different age stages. A weanling colt foal is about young male horses that are already weaned. A yearling colt ages between one and two years old.

When Does a Colt Become a Horse?

A colt becomes a horse at the age of four years old. This is the age when it becomes an adult male horse. A male horse can be a stallion or a gelding. The same goes for a male pony. A castrated horse bred for non-breeding purposes is called a gelding horse. In horse racing, most horses are gelded. It’s done to increase their potential on a track. Here’s an article that reveals the best horse breeds for racing.

Other horses are called stallions (males only). They are used for breeding and can be called a “stud”. Adult horses can be ridden under Western and English saddles. Get your horse used to horse tack from an early age.

What Is a Filly Horse?

A filly is a young female horse. A filly foal is a baby girl. The term filly is used to describe a horse aged under three-four years old. When the foal is separated from its mom, it becomes a weanling filly. A female horse aged from one to two years old is called a yearling filly.

When the animal matures, it becomes an adult female horse. Such horses are called mares. A female pony is also called a mare. A pregnant mare can be called a prospect broodmare.

When Does a Filly Become a Mare?

A filly becomes a mare at the age of four years old. It’s referred to as horse maturity. It means the female horse can get pregnant. Some horse breeds mature faster. Some of the breeds can start giving birth to foals at the age of two or three.

All equines belong to the species called Equus ferus caballus. Horses are called differently at the various age stages. After birth, both a male foal and a female foal are called a foal. Then, the weanling age comes when it’s time to eat solid food. A female or male yearling is aged by one to two years old.

The term colt describes young male horses only. While filly is about female horses. The horse terms colt and foal may be also confused. Hope this article will help you to get the hang of horse aging.