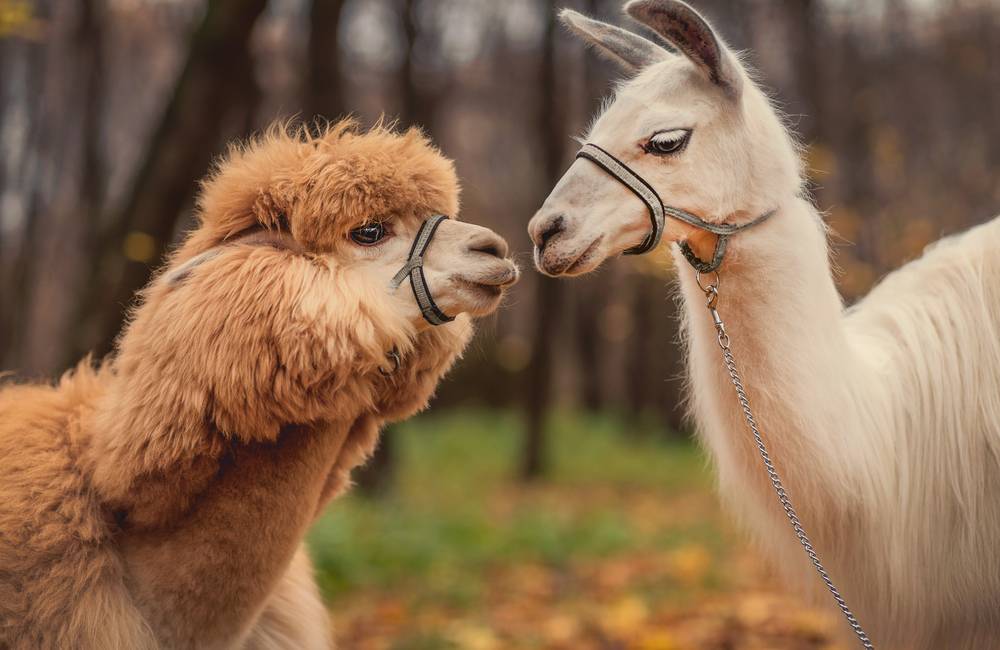 Both alpaca and llama belong to the same camel family named Camelidae. They are both South American lamoid species and are considered domesticated animals.

So, what is the difference between a llama and an alpaca?

Alpacas are smaller than llamas, and they have fine and soft fiber, which is used for making garments. On the other hand, llamas are larger than alpacas, and their fiber is coarser. Llamas are used as pack animals because of their strength. Both alpacas and llamas have four stomachs that help them digest grasses properly. These animals also hum to communicate with each other especially when they feel threatened or frightened.

While looking similar, these furry animals have different features. Let’s get the hang of the alpacas vs llamas difference.

Where Are Llamas from?

Llamas originally came from South America, primarily found in Peru, Chile, and Andes Mountains in Bolivia. These fluffy animals were introduced to North America in the late 1800s. Now, you can find llamas in zoos and farms in the United States.

What Is a Llama?

What Do Llamas Eat?

Llamas are herbivores that mainly eat grasses and hay. They also consume alfalfa, vegetables, and grains.

How Much Is a Llama?

Where Are Alpacas From?

South America is a country known for alpacas. The first alpaca herd was first imported to the United States in 1984. You can find alpacas mostly in Chile, Peru, or Bolivia.

What Is an Alpaca?

The alpaca is a herd animal that is closely related to the llama. There are two types of alpacas – the Huacaya alpaca and the Suri alpaca. This cute animal is the smallest member of the camel family. Most alpacas have an average height of three feet tall at the shoulders. Baby alpacas are called “cria”, they produce fine wool within their first shear. The average alpaca comes with a birth weight that ranges from 18 to 20 pounds. Their first alpaca wool is called “baby alpaca”.

What Do Alpacas Eat?

Like llamas, alpacas are herbivores that mainly eat hay and grains. They also eat vegetables, leaves, wood, and bark.

How Much Is an Alpaca?

What’s the Difference Between Llamas and Alpacas?

Here are 10 reliable ways how to spot the difference between alpaca and llama for sure.

Llamas are much larger animals than alpacas. The average llama is about five and a half feet tall at the shoulders. This is nearly two feet taller than an alpaca.

Llamas also weigh significantly more than alpacas. The average weight of a male goes between 350 and 400 pounds, while females usually fall somewhere between 250 and 300 pounds. In contrast, alpacas typically only weigh around 150 to 200 pounds.

Alpaca’s face has a more rectangular shape, while llamas have an oval-shaped head. Alpacas tend to have rounder eyes that sit higher up on their heads than llamas. Also, alpacas’ noses are usually black or dark brown. In contrast, llamas’ noses can be a variety of colors, including pink and white.

Alpaca ears are shorter than of llamas. As for the shape, alpacas feature straight and pointed ears. While llamas have prolonged banana-shaped ears.

Llamas have a split upper lip, while alpacas do not.

Llamas are considered to be more aggressive than alpacas. They also tend to be very independent and curious by nature. Alpacas, on the other hand, are usually gentle and shy. These are herd animals that tend to stay together in case of danger. Llamas is the opposite story. They prefer grazing independently. Llamas are more confident.

The llama is prone to spitting when it feels threatened. Alpacas do not have this habit. When alpacas are stressed, they make a bleating noise that sounds like a cry. Llamas, on the other hand, tend to be silent when they are under pressure.

Alpacas usually live for around 20 years. The average lifespan of a llama is 15 years.

Alpaca’s hair is softer than that of llamas. Llama wool is coarser and less dense. Alpaca fiber is also more valuable. Alpacas are shorn once a year, while llamas are usually not shorn at all.

The coat of an alpaca has about 22 different shades, while the coat of a llama only has up to 12 shades. Llama wool can be used for making rugs, horse blankets, and coats. Alpaca fiber is often made into sweaters, gloves, and other garments.

An alpaca’s coat is much thicker than a llama’s. The alpaca has an outer layer of long, thick hair and an undercoat of soft wool. A llama also has two coats, but the inner coat is not as dense as the alpaca’s.

Llamas are often used as hard-working pack animals. These great guard animals are often used to keep an eye on other livestock. Also, the llama can carry a solid load on its back and pull heavy weights. At the same time, alpacas are usually bred for their much finer fiber. Unlike the sheep’s wool, alpaca fluffy fleece is hypoallergenic. You can find a myriad of alpaca products like sweaters, socks, mittens, and blankets. While llama fleece clothes are quite rare. Some ropes and rugs may include the llama fiber. Sometimes, alpacas can be used as therapy animals for kids and adults.

What Do Llama and Alpaca Have in Common?

Llamas and alpacas can make great farm animals as well as pets. These two animals are social creatures that enjoy the company of other llamas and alpacas. When you consider getting a llama or alpaca, be prepared to provide them with a large enclosure and plenty of hay for their diet. If you live in the city, an alpaca or llama may not be the best pet for you.

Llamas and alpacas have a three-chamber stomach that helps them to digest plants that are low in nutrients. And because of this, these hardy animals can live in areas where other animals would starve.

Both llamas and alpacas are herbivores. They like to eat grass, hay, and other plants. However, llamas tend to eat tough grasses, while alpacas prefer to eat softer plants.

What Is the Difference Between Llamas and Alpacas – Quick Points

To conclude the battle between llama vs alpaca, here’s a brief list of the main differences between the animals.

Are Llamas and Alpacas the Same Thing?

No, alpaca and llama are not the same species. Llamas and alpacas look similar, but they’re actually two different animals. However, these animals belong to the same camel family.

What Are Vicuña and Guanaco?

Can You Ride an Alpaca?

No, the alpaca is not good for riding. Alpacas are too small to carry the weight of a human on their back. Their bone structure is too weak to bear heavy loads.

Can You Ride a Llama?

Yes, llamas can be ridden. Llamas are bigger than alpacas, and they have a strong bone structure that can support the weight of a human. However, only small kids that weigh under 50 pounds are recommended to ride a llama. Llamas can’t withstand the weight of an adult.

If you’re wondering, “Are alpacas and llamas related?” this article has the answer.  Yes, these animals belong to the same family, but alpaca and llama are quite different. This article reveals the key points on how to distinguish a llama from alpaca. Now you’ll spot the animals like a pro when traveling or visiting a zoo.