Some horse breeds have an average height of 17 hands and more. That is impressive!

Both Belgian and Clydesdale horses are two of the largest horse breeds.

Let’s check all the similarities and differences between a Belgian Horse and Clydesdale Horse.

What Horse Is Bigger Than a Clydesdale Horse?

The Belgian Horse is bigger than the Clydesdale Horse. A Belgian horse height goes from 16.2 to 17 hands. The average weight of the breed is 1,800 to 2,000 pounds. Belgians are usually not as tall as Clydesdales. But they weigh more.

The Belgian size is not the only feature that distinguishes the breed. Actually, Belgians keep a range of world records in different categories. Here are some of them.

The largest Belgian Horse weighed more than 3,000 pounds! That was Brooklyn Supreme from the 1940s. An average Belgian weighs 2,000 pounds.

Belgian Draft Horses are claimed as the largest and the tallest horse breed. It’s one of the strongest breeds of horses in the world. Their bodies are short but muscular. The legs are short but powerful. Belgians are massive equines that will stand you in good stead for sure.

Both breeds are bulky draft horses, but there are some differences between their average height and weight. 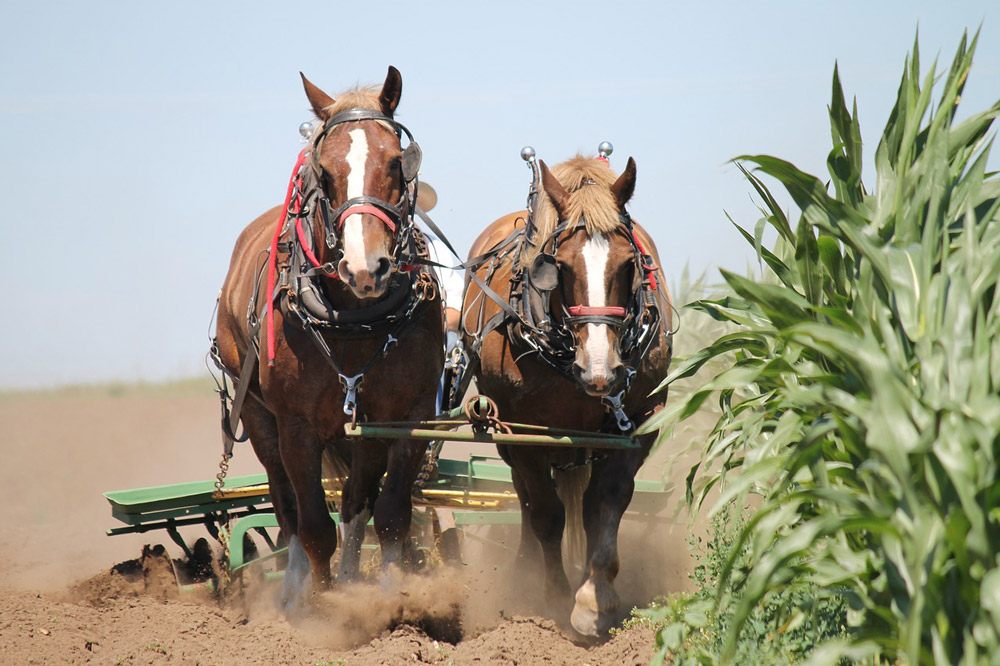 A Belgian Horse named Big Jake is the tallest horse in the world. The horse’s height is 20 hands 2.75 inches tall with no shoes included. It weighs 2,600 pounds. The record was set at Smokey Hollow Farms where Big Jake is kept.

4. The Most Weight Pulled

The Belgian Draft Horse set the world’s record as the breed that pulls the most weight. Pulling competitions take place all over the states and beyond. The weight is loaded on a sled and the horse must pull it as far as possible.

Belgian are one of the most powerful draft breeds. These massive but gentle giants usually partake in a heavyweight category. In most cases, that’s the only horse breed to take part in such pulling competitions. 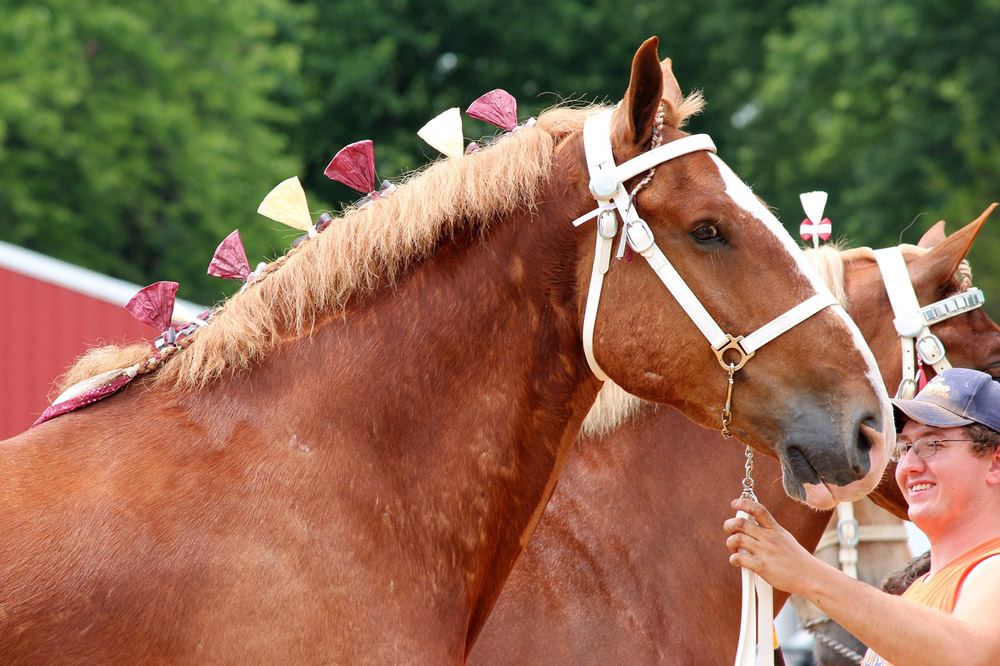 The Belgian Draft is a draft breed that originated from the Brabant region in Belgium. The popularity of the draft horse breed has spread beyond Europe too. It’s one of the largest horse breeds. During World War II, the breed was used to develop hardy and heavy equines. The horses were used as farm workers. These animals can pull heavy weight as they are durable.

The Belgian Draft Horse height ranges from 16.2 to 17 hands. The equine weighs around 2,000 pounds on average. As for the conformation, the Belgian Horse has a refined small head. The body and legs are short but massive. The back is wide and the loins are powerful. The quarter mass is muscular. Compared to other draft breeds, the Belgian has hooves of medium size.

The legs are strong and powerful. There’s little feathering on the lower limbs. Belgians usually come in a chestnut color with a mane and tail of flaxen color. However, breeders have developed Belgian Horses of roan and sorrel colors that are quite common nowadays.

Belgians are loved for their pretty white markings. They commonly occur on the horse’s face and lower legs (white stockings).

The Belgian Horse life expectancy is 25 to 30 years, which is solid.

The Belgian breed is deemed as one of the strongest draft horses. They have been used as working horses as well as showing horses. It’s a common horse breed for pulling competitions. Some horsemen prefer using their equines as riding horses as well.

Apart from equestrian sports, the Belgian horse is bred for horse meat. Some people find this tender meat a delicacy. 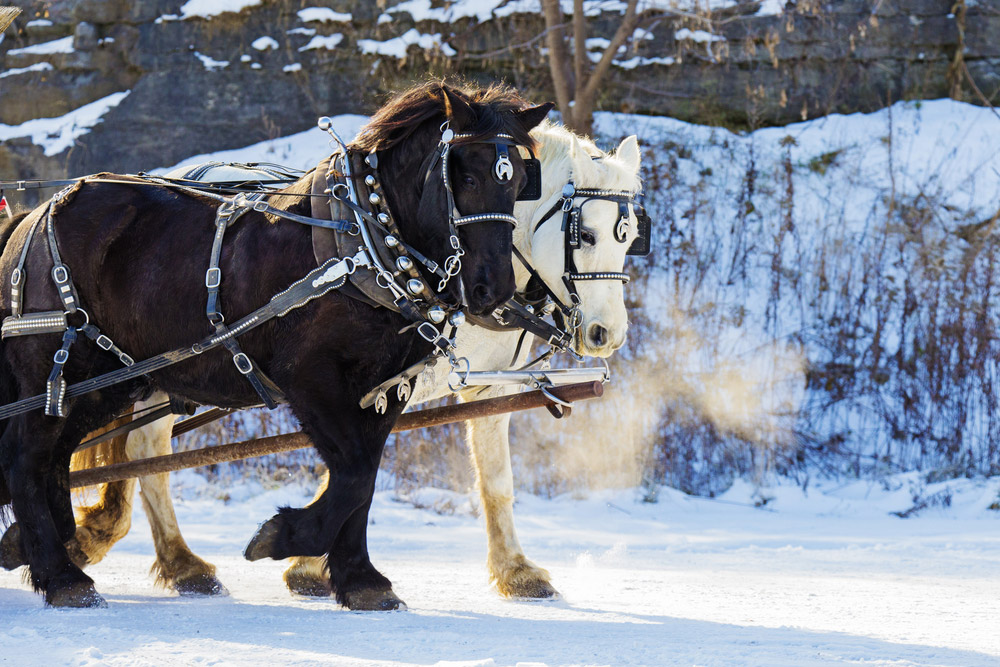 The Clydesdale is a draft horse breed derived from Scotland. It’s typically distributed to Australia, New Zealand, and the USA. The Clydesdale Horse, like many other draft horses, was used as a war horse, for farm working, and driving. Now the breed is still used for parades, trail riding, as a show and carriage horse. Thus, such an animal is quite versatile.

In fact, the Clydesdale Horse breed became popular because of the advertisement made by the Budweiser brewing company. Such equines were named Budweiser Clydesdales. The horse is also highly recognizable due to the bay coat and four white limbs with massive feathering.

The Clydesdale Horse height is 16 to 18 hands. That makes the breed one of the largest equines in the world. Some stallions grow up even more than 18 hands tall. These gentle giants are really huge!

The bread features a calm temperament. They’re quite intelligent and kind. That’s why these gentle giants are loved to work with.

Clydesdale Horses live 20 to 25 years. That’s a pretty solid life expectancy. However, some horse breeds, like the Percheron Horse, can live up to 30 years. Such animals are long-livers. The longest-living horse ever recorded was Old Billy. This Shire Horse lived 62 years!

The horse stands out with a muscular and arched neck. The head is prominent with a broad forehead, the muzzle is wide. The withers are high and the shoulders are sloped.

The Clydesdale Horse is loved for its impressive feathering on lower legs with large hooves. Many Clydesdales have white markings on their faces and white stockings on their limbs. 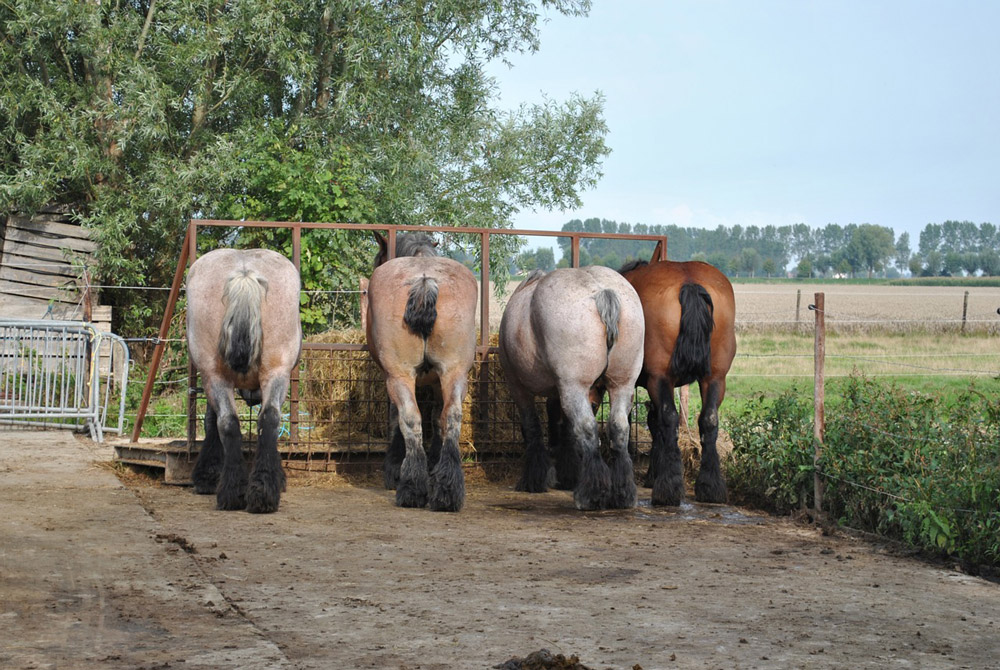 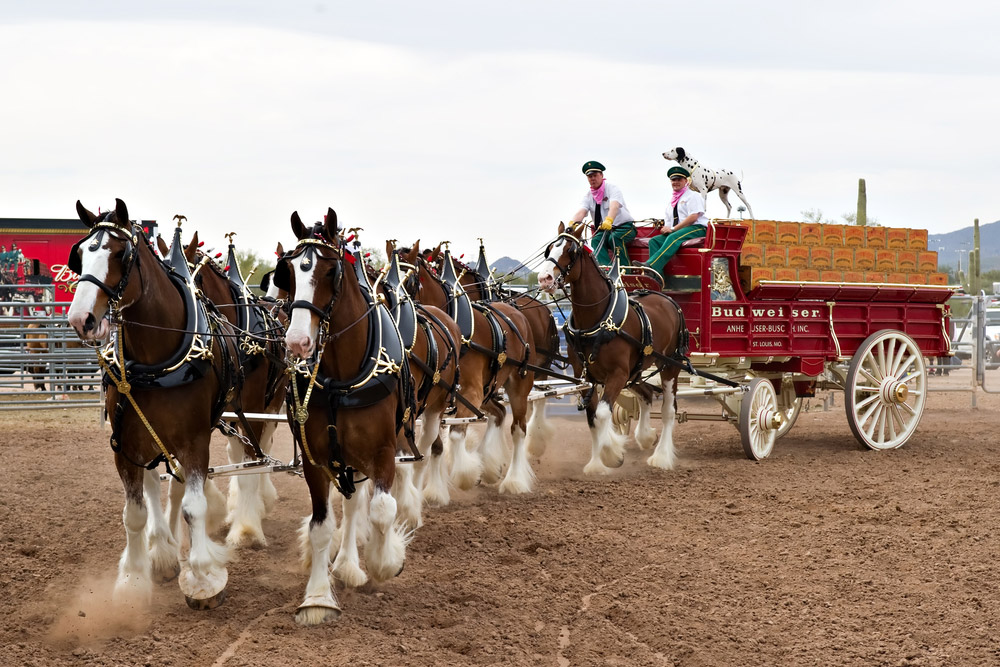 Belgian and Clydesdale horses are massive draft breeds that are distinguished from light horse breeds. Such equines are quite versatile in use. They are excellent farm workers due to their hardiness. Their graceful appearance is another superb feature. That’s why they’ve been participating in a range of shows and competitions. Draft horses are also used for trail riding and for commercial purposes.

The Belgian Horse and Clydesdale Horse are two of the largest horse breeds. Apart from them, we can add the Shire Horse, the Percherons, and Australian Draft Horse. All of these massive animals look eerily. But the truth is that most of the draft horses are calm and friendly.

If you’re looking for a horse breed that is agile and willing to work, both Belgian and Clydesdale horses are ideal options. Keep in mind such equines require solid care. It includes regular grooming, clipping, feeding, and watering.

David Garcia is a vivid writer and a big fan of equestrian sports. He founded Horsezz – the blog where David shares his knowledge and experience about horses, tack, equestrian riding equipment, taking care of horses, and other useful guidelines.
PrevPreviousClydesdale Horse Price and Characteristics
NextTennessee Walking Horse Temperament and CharacteristicsNext