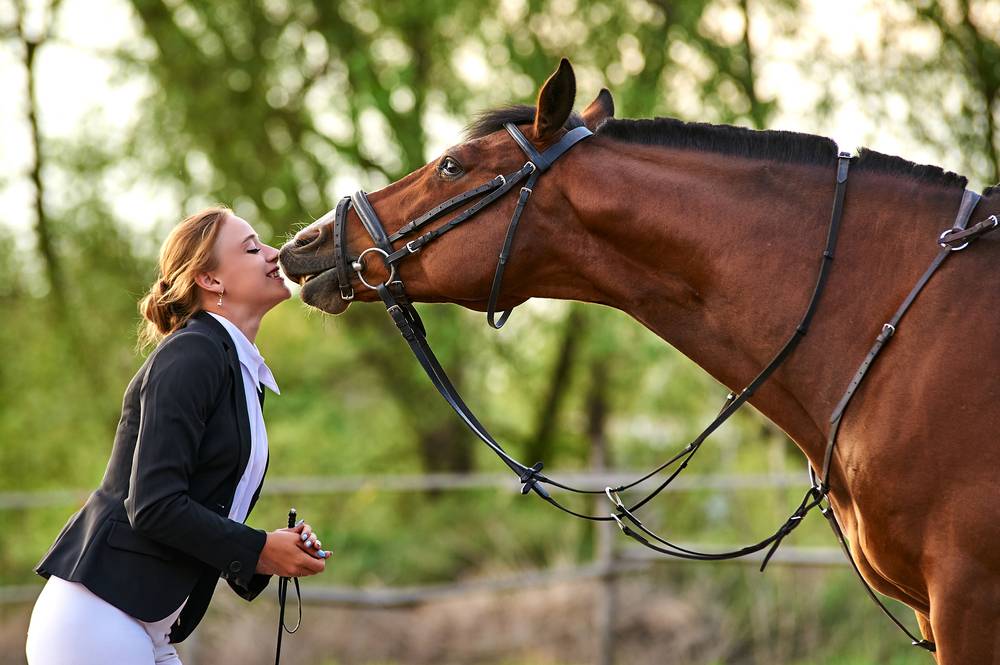 Horses are often considered to be loyal animals, and there is certainly a lot of evidence to suggest that horses can form strong bonds with their owners. For example, many horse owners report that their horses will come to them when called and will follow them around the stable. Some horses also seem to enjoy being groomed and pampered by their owners and will nuzzle them or rest their heads on their shoulders. So, are horses loyal to people?

Horses are truly loyal animals and can build strong bonds with their owners. This is because a horse features a solid memory and can determine their owner among other people. That is why horses react to owners’ voices and commands, and can “respond” to their emotions.

However, note that the loyalty of horses is not always as simple as it may seem. While some equines may be naturally inclined to form strong bonds with their owners, others may not be as inclined to do so. Additionally, the loyalty of a horse can be influenced by a range of factors. These include the horse’s breed, personality, and individual experiences.

This article explains what horse loyalty means and if they can bond with horse owners.

What Does a Loyal Horse Mean?

A loyal horse is one that has a strong bond with its owner or handler. This bond is characterized by trust, reliability, and a willingness to work together. A loyal horse will respond to commands and cues from its owner, and will often seek out their company.

You can mention affection and trust towards its owner, such as nuzzling or seeking attention. The animal is comfortable with being handled, and groomed and will willingly participate in training. They are also willing to face new challenges with the owner and are confident in their presence.

The Behavioral Background That Lies in Horse’s Loyalty

Horses are companion animals and have a natural inclination to form bonds with other members of their herd. This strong sense of social bonding is an important aspect of a horse’s emotional background that lies in its loyalty toward its owner.

From a physical standpoint, equines have a complex nervous system that is responsible for their emotional responses. They have an acute sense of smell, hearing, and vision, unlike other animals. This allows them to perceive and respond to their environment in a highly attuned way. They also have an innate fight-or-flight response. It can be triggered by perceived threats or changes in their environment.

Horses that have been well-trained and treated kindly, will have a positive emotional response to their handler. They will be more inclined to form a strong bond with them. Such prey animals will also be more relaxed and comfortable in their presence. This helps to create more positive behaviors and builds an environment of trust and mutual understanding.

On the other hand, horses that have been mistreated or have had negative experiences with humans may be more hesitant to trust new people. These equines may be more prone to anxiety, fear, or aggression, and may not respond well to proper training or handling.

In addition to the physical and emotional background, the environment in which the horse is raised also plays a vital role in determining the level of loyalty. For example, horses that are raised in a stable environment with regular human interaction will be more prone to forming bonds with their handlers than those raised in a wild environment.

Can Horses Be as Loyal as Dogs?

Horses and dogs are both highly social animals, and they can form strong bonds with their owners. But the nature of the horse’s loyalty and the dog’s loyalty is different between the two species.

Canines have evolved to be highly social animals, and they have a natural inclination to form strong bonds with their human companions. They are often described as being “man’s best friend.” Dogs are known for their loyalty, affection, and ability to understand and respond to the human voice and emotions. Dogs are also highly trainable, and they can be taught to perform a wide variety of tasks. These include assisting people with disabilities, providing companionship, and serving as guard dogs.

Horses, on the other hand, are herd animals and have a natural inclination to form bonds with other horses. While they can also form strong bonds with humans, they may not always be as intense as the bond between a dog and its owner. Due to herd behavior, most horses are more inclined to form close bonds with other horses than with their human handlers. However, horses can also be highly responsive to their handlers. Equines are often described as being willing partners in a range of activities. These include riding, racing, and therapeutic programs.

Can Horses Have a Special Emotional Bond with Their Owners?

Horses are social animals and have the ability to form strong emotional bonds with their owners. This bond can be observed in the way human friends respond to their owners. This lies in seeking out their company, being relaxed and comfortable in their presence, and showing affection.

Horses are highly attuned to their environment, and they can sense the emotions of their handlers. They can also form a deep understanding of human words and behaviors. This can help to create a sense of trust and mutual understanding between the horse and its owner. This bond can be strengthened through regular interactions and training, as the horse learns to trust and rely on its human.

Research has also shown that when the horse and the owner have a strong emotional bond, it can have positive effects on the horse’s mental and physical well-being. For example, a study by the University of Sussex found that horses that have a strong bond with their owner show lower levels of the stress hormone cortisol. As a result, they have better overall health and longevity.

When horses bond with their human owners, they will often be more willing to take on new challenges and perform tasks. They have trust in the owner and will follow their lead.

What Is the Most Loyal Horse Breed?

The Andalusian Horse, also known as the Spanish Horse, is considered to be one of the most loyal horse breeds. This breed is known for its intelligence, beauty, and athleticism. The Andalusian Horse has been used for centuries in a wide variety of roles, from war horses to dressage.

One of the key characteristics of the Andalusian horse is its strong bond with its human. This horse breed is highly responsive to its handlers and has been known to form strong emotional bonds with its owners. They are also known to be highly trainable and are often used in dressage and other performance disciplines.

The Andalusian horse is known for its versatility and adaptability. They are often used in a wide variety of settings. From the show ring to the working ranch, they have proven to be highly adaptable to different environments and tasks. This adaptability can be attributed to their strong sense of loyalty to their handlers and the trust they have built with them.

A loyal horse is one that has formed a close relationship with its owner and is willing to trust and work with them in a variety of situations. It’s a bond built on mutual trust, understanding, and care that results in a willing and responsive partner. Due to horses’ excellent memories, horses feel their owners’ emotions and can understand their body language. While equines are quite loyal in the animal kingdom, building a strong attachment is a complicated process that requires constant training.